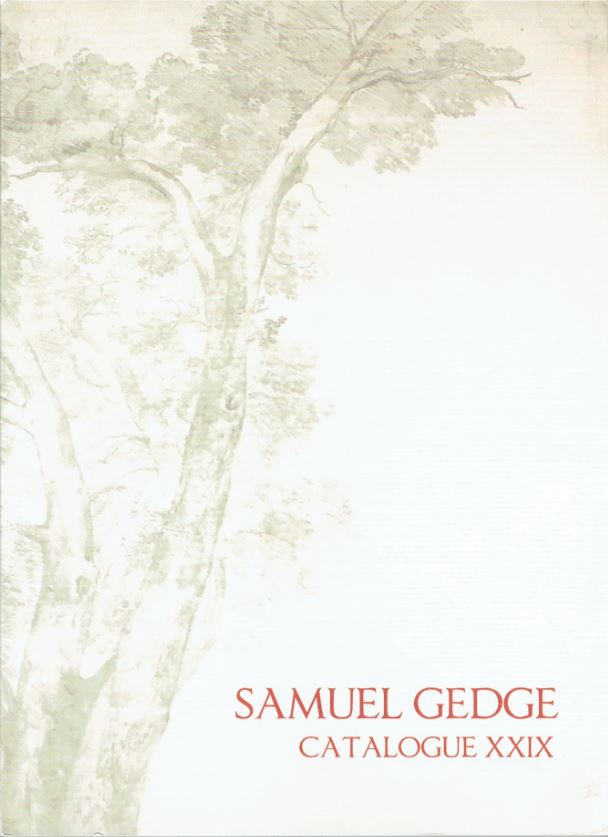 Samuel Gedge Ltd. has issued their Catalogue XXIX. Gedge offers books and ephemera, though mostly ephemera. There are many documents, letters, handbills and such, all very old. “Remarkable survival” would probably apply to half the material herein. There is one type of book they always seem to find somewhere – turn of the 19th century novels, many if not most in the French language. These are mostly obscure and not often the greatest literary masterpieces, but “hard to find” undoubtedly applies. These are a few selections from this 29th catalogue.

George Catlin was one of a handful of artists who painted pictures of America's natives in the days before photography, and the days before their culture was inalterably changed by the arrival of Europeans. Catlin visited the West and began drawing his images in the 1830s. They are still regarded as among the best ever created. Rather than selling his artwork, Catlin went on the road to put it on display. People would come to learn about these natives with whom they were mostly unfamiliar. Catlin next went on the sea, taking his displays to England in 1840. A few years later, he bettered himself. He brought along several Native Americans who would perform some of their rituals for the public. Item 85 is a handbill for such a performance in 1844. The bold headline states The Fourteen Ioway Indians From the Rocky Mountains, in America, Vauxhaul Gardens. It noted they will participate in “Dances, Games, Ball Plays, Songs, Archery, and Equestrian Exercises.” A bit less tastefully it says, “Mr. Catlin...will turn the fourteen Ioway Indians loose for a few days, where they can be seen to great advantage, in all the freedom of savage, forest life; their tents (or wig-wams) brought with them from their country...” Priced at £1,950 (British pounds, or approximately $2,549 in U.S. currency).

Next we have a drawing of a creature that co-inhabited the American Plains with the Indians. It is an image created through pen lithography of an American bison. An ink annotation on the bottom is evidently that of the artist, as it names “Revd. Mr. Rackett.” Rev. Rackett was an English clergyman from Dorset who was also interested in the sciences. Gedge has not been able to locate any other copies of this lithograph and believes it was most likely created by Rev. Rackett for a small number of friends. Gedge estimates the likely date, and why an English clergyman came across a bison in the first place, to 1821. That year, there was an exhibition in London of “the Bonassus from the Apalachian Mountains of America.” Most of us just call them “buffalo.” Item 86. £750 (US $977).

You can't see the drawing of that buffalo, but if you could, you would notice his long beard. Here is someone else who had a long beard. Item 17 is a handbill headed Facts! Amazing Facts! Never Exhibited in England, Mademoiselle Lefort, A first rate Phenomenon of French Production, In whom the Sexes are so equally blended that it is impossible to say which has the Predominance... The text explains that her “hands, arms, feet and bust, possess perfect feminine beauty, likewise the upper part of the face...” However, it continues that “the lower part is also beautiful, but possessing the accompaniments of beard, mustachioes and whiskers.” It concludes, “the curious must be amply gratified by the contrasting beauties of her person...” She was appearing at Portland Place on Beaumont Street in 1818. £450 (US $585).

This lady had no beard, which was just a part of her appeal. Item 31 is a print of a fashionably attired young lady sitting on a park bench, relaxing with her feet up along the bench. She looks straight out at you. This was undoubtedly a provocative pose for its day, circa 1780. The caption says, A Man-Trap. Indeed. A sign in the background reads “Spring guns set here.” Spring guns were used at the time to trap poachers. Signage was required as a warning if these were employed. In this case, it is a warning about this “man trap.” The artist was Carington Bowles, who was noted for such humorous images. £450 (US $585).

Item 15 is a receipt from May of 1624 with diplomatic overtones. It certifies payment to French nobleman Jacques de Bonnevau for delivery of a gift. The gift came from French King Louis XIII to English King James I. Since it states it was for falconry, it is likely a gift recorded in English records for that year of 16 hawks. De Bonnevau had the job of delivering the gift to the English King. Both Louis and James were known as avid participants in the sport of falconry, so this was something they strongly had in common. The English record also notes that James went off to participate in the sport in the countryside against the advice of his physician. James was already suffering from ill health by then and died the following year. James, who reigned from 1603-1625, was not without his faults, but he was known as a peaceful king, bringing tranquility to his land. Considering how many wars European countries engaged in, and how many times England and France were at each others' throats, James' peace was welcome. This gift is evidence of the good relations the two often rivals had at this time. Item 15. £1,250 (US $1,627).