Books that Became Films from Between The Covers 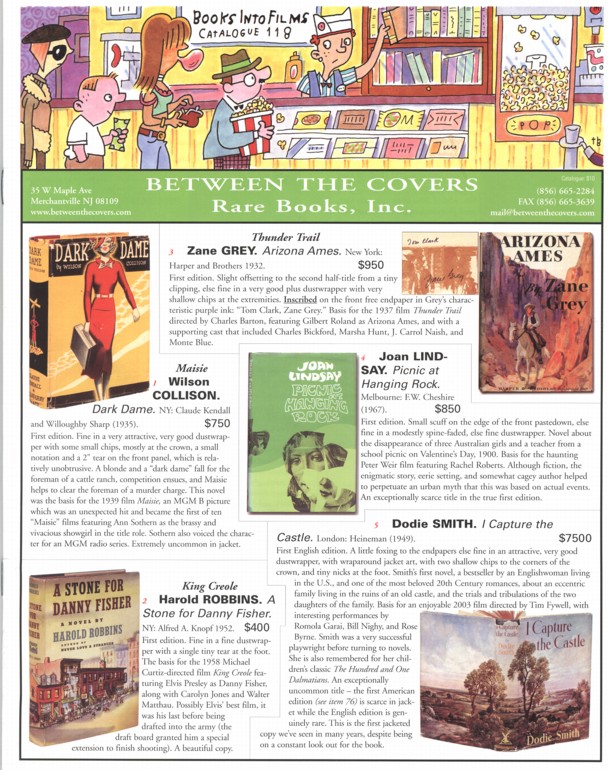 Books that Became Films from Between The Covers

Curtains up! Now appearing on the big screen (or small screen if that is what your computer is equipped with) is a review of a catalogue for those who appreciate both books and movies. It comes from Merchantville, New Jersey, bookseller Between the Covers, and the title is Books Into Films. Was the movie really not as good as the book? Here is your chance to find out. This is a collection of over one hundred books that have been made into movies. They range all the way from books that were converted to silent films in the first quarter of the 20th century to some which are likely playing in theaters in your neighborhood right now. Many of these were great literary masterpieces in themselves. Steinbeck didn't need actors and directors to make his work great or famous. Others are perhaps as forgettable as the "B" movies they spawned. It doesn't matter. They're all here waiting for their audience to be seated. Get your popcorn quickly. Starting time is now.

There is almost always a difference between those who starred in these movies and those who wrote the book. Here is the exception. Item 87 is Diamond Lil, and the author was none other than the film's star, Mae West. On the screen, the title became "She Done Him Wrong." West was the brilliant actress and comedienne whose bawdy jokes made her a film sensation, the idol of many a wandering-eyed male though she was hardly the most beauteous of actresses to ever cross a stage. With this book, West used her writing talents to launch her career, first in the story's portrayal on the stage, and then on film. "She Done Him Wrong" starred West and a young Cary Grant, who would go on to have a most notable career himself. The movie is best remembered for the line, "Why don't you come up and see me sometime," though Mae West never uttered those words (she actually said, "Why don't you come up sometime and see me"). This first edition book is priced at $850.

"King Creole" may well have been Elvis' best film. Released in 1958, before the "King" left for the army, and before the series of trite romances that brought in lots of money but afforded no opportunity for development as an actor, Presley starred in this critically respected movie. Other actors included the dour Walter Matthau as a mobster and club owner. Presley and Matthau - now that's an odd couple. "King Creole" was based on the Harold Robbins book, A Stone for Danny Fisher. Presley played Danny Fisher, but there were many changes from book to movie. The setting moved from New York to New Orleans, Fisher became a singer rather than a boxer, and the original Danny was a Jewish boy from Brooklyn, an incongruous role for Elvis Presley. Nevertheless, the adaptation was a good, solid film, displaying the never fulfilled acting potential of Presley. It reportedly was the favorite performance of the superstar, who regretted not being allowed by his handlers to pursue more serious roles. Item 2. $400.