Canadiana Plus from Patrick McGahern Books 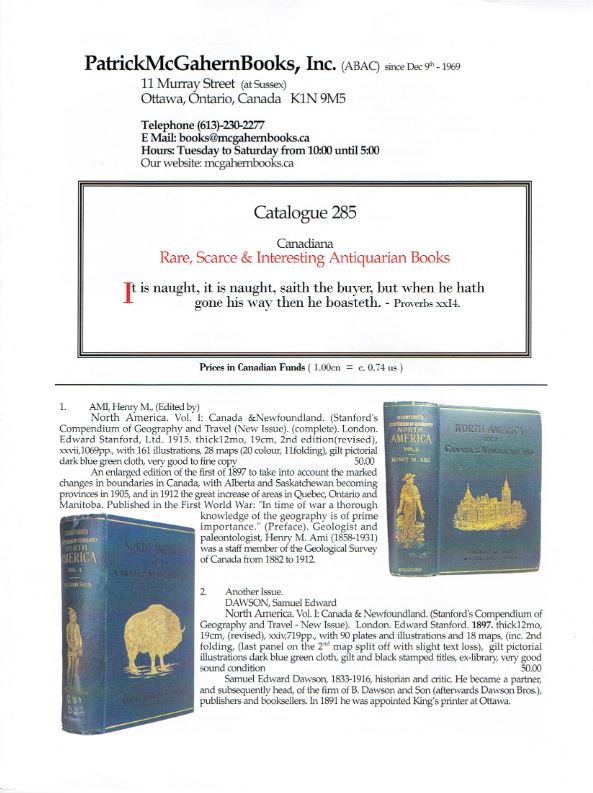 Canadiana Plus from Patrick McGahern Books

Patrick McGahern Books recently released their Catalogue 284 Canadiana, Rare, Scarce & Interesting Antiquarian Books. That is a slight understatement. It is mostly Canadian material, but there are some items that clearly come from south of the border – Americana. Most items are from the 19th and 20th century, a few older. Some are British, Canada being a British colony for much of the 19th century. These are a few of the books you will find in this latest selection.

The first item is partly Canadiana, partly Americana. The title is An Accurate and Interesting Account of the Hardships and Sufferings of the Band of Heroes, who traversed the wilderness in the Campaign Against Quebec in 1775. A year before declaring independence, Americans were fighting for it. The idea was to disrupt British forces north of the border so that they could not cause problems on the American side later on. General Richard Montgomery led the main forces, while Benedict Arnold brought a second group up through New England. None of it worked as planned. Montgomery was killed in the Battle of Quebec, Arnold injured. Eventually, Arnold and his men were forced to make a difficult retreat south. This account was written by John Joseph Henry, who served under Arnold. He recounts their expedition through the Maine wilderness to meet up with Montgomery. Henry published his account many years later, in 1812, primarily for his children. Arnold would have his revenge against the British two years later as one of the leaders of the Patriots' forces in their success at Saratoga, but then, sadly, he became the Benedict Arnold we all remember. Item 28. Priced at CAD $400 (Canadian dollars, or approximately $304 in U.S. currency).

Item 4 is a signed document from Edward Augustus, Duke of Kent. It is a document relating to a debt. He signed it on October 30, 1795. The fourth son of King George III, he had been appointed the previous year as Commander of British Forces in Nova Scotia at the age of 27, a position not of momentous importance. As a fourth son, it was unlikely he would ever become King, and he did not. However, he might have had he lived longer. Two of his older brothers did become King, but they outlived the Duke so he never had the chance. However, not all was lost for his side of the family. He had one child, a daughter. As his older brothers had no legitimate issue, it was she who succeeded his brothers as monarch. She took throne in 1837 and reigned for 63 years, the longest of any British monarch up to that time. She was one of the best known of all British Kings and Queens. His daughter was Queen Victoria. CA $400 (US $304).

Speaking of Queen Victoria, item 52 is a broadside for an event in her honor in 1887. It is headed National and Sacred Songs to be Sung at the Ottawa Jubilee Demonstration in Commemoration of the Fiftieth Anniversary of the Reign of Her Majesty Queen Victoria... During her reign, Canada became essentially independent, but, unlike in America, there were no hard feelings. She was still officially the Queen even if her powers in Canada were greatly diminished. Among the patriotic songs sung in her honor was God Save the Queen, and despite already serving 50 years on the throne at the time, He did save her for another 13 years. CA $50 (US $38).

Item 23 is Modern English. Leave the Old to the Old. A Canadian Grammar. This is an essential tool for those who speak Canadian. The author was James D. Gillis, obviously a forward-thinking teacher from Cape Breton, Nova Scotia. He lists his fellow Cape Breton teachers who assisted him in creating this modern (as of 1925) grammar. CA $40 (US $30).

Item 48 consists of 16 mounted photographs of the devastating Hull-Ottawa fire of 1900. It is dated April 26, 1900, the day of the fire, with manuscript titles. The fire started from a chimney in a house in Hull and quickly spread to neighboring houses. From there, it went to lumber companies along the river that had large piles of stacked lumber. Finally, spread by high winds, embers jumped the Ottawa River and spread the fire to Ottawa. By the time it was extinguished, 40% of the buildings in Hull were destroyed, 20% of those in Ottawa. Seven people died from the fire and another 15,000 were made homeless. These pictures show the fire and damage it caused. CA $50 (US $38).

Item 22 is The Object, Benefits and History of Normal Schools, with Act of Legislature of Nova Scotia... by A. Forrester, published in 1855. The benefit of normal schools was not that they weren't abnormal schools. The “normal” comes from the idea that they were teaching certain norms of curriculum to their students. Normal schools were designed to teach teachers, that is, produce teachers for the secondary schools. CA $50 (US $38).