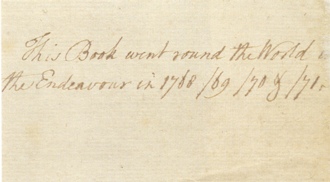 
Naturally there is a complete set of Cook's Voyages. There are eight volumes in the set, and this one includes first editions of the first and third voyages and a fourth edition of the second. The fourth edition of the second voyage was published contemporaneously with the first edition of the third voyage (1784). The first voyage was published in 1773, and this book under Hawkesworth's name is a wonderful account, Dalrymple's opinion notwithstanding. Item 72. $85,000 (US $63,936).

Captain James Cook is most remembered for the discoveries on his journeys, New Zealand, much about Australia, later Hawaii and explorations along the coast of North America. However, a totally different discovery of Cook's opened the door for much wider exploration in the years ahead. Scurvy was the scourge of all sailors in the era, killing large numbers of them, such as happened to Anson. Cook read David McBride's 1767 medical book, Experimental Essays on medical and philosophical subjects: particularly...IV On the scurvy... In fact, Cook took a copy of this book with him on his first voyage. It helped him find the antidote to the disease. Item 83. $6,000 (US $4,513).

When Cook came back with his cure, he generated a paper which Sir John Pringle presented to the Royal Society in 1776 (wasn't something going on in America at this time?). The result is this first account of the cure for scurvy discovered by Cook comes under Pringle's name and the title A Discourse upon some late improvements of the Means for Preserving the Health of Mariners... Cook could not deliver it as he was back at sea. Item 84. $80,000 (US $60,175).

Item 86 is An Introduction to Physiology...by Malcolm Flemyng. What does this medical, anatomical book have to do with Cook's voyages? The answer is it went along on his first voyage on the "Endeavor." It belonged to William Perry, the surgeon's mate, who was promoted to surgeon when his superior died. The book includes many of Perry's handwritten marginal notes, and some more detailed comments plus an anatomical drawing of the eye. On the front pastedown, Perry has written, "This Book went round the World in the Endeavor in 1768 /69 /70 /71." $78,500 (US $59,046).