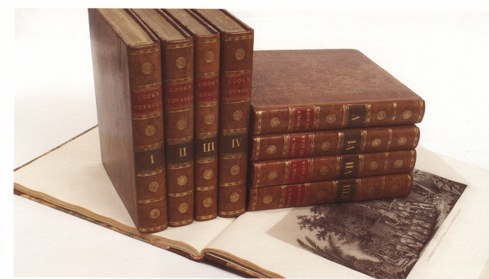 
Item 22 is A Voyage to the South Seas, in the Years 1740-1. Containing a faithful Narrative of the Loss of His Majesty's Ship the Wager on a desolate island...by John Bulkeley and John Cummins. This is the story of two members of the crew of the "Wager," one of Anson's sister ships that didn't make it. Actually, the crew of the "Wager," split into two groups, those who stayed with their captain after the ship was wrecked, and those who did not. Bulkeley and Cummins were among the group which did not. Neither group had a good time of it, though members of each would eventually find their way back to England. This party of survivors made their way through the Straits of Magellan in a longboat and then on to Rio. $5,500 (US $4,137).

Although published two decades after Cook's final trip (in 1803-1807), James Burney's A Chronological History of the Discoveries in the South Sea or Pacific Ocean is one of the most thorough histories of pre-Cook voyages ever published. Burney, who produced this five-volume set, sailed with Cook on his second and third voyages, but saved that material for later. Item 42. $25,000 (US $18,804).

Item 49 is another early history, An Historical Collection of several Voyages and Discoveries in the South Pacific Ocean, by Alexander Dalrymple. Dalrymple was a brilliant student of the seas, and he hoped to get the commission to explore the South Pacific that eventually went to Cook. However, he demanded too much, such as being commissioned an admiral, and the result was he lost the voyage's command. A glimpse at Dalrymple's personality can be seen in the book's "undedications" to earlier travelers. One is to Byron "who discovered scarcely anything but Patagonians," and another to Wallis, discoverer of Tahiti, who "infatuated with female blandishments forgot for what he went abroad and hastened back to amuse the European world with stories of enchantments..." Female blandishments can do that to you. $22,500 (US $16,924).

Here is another look at the prickly personality of Dr. Dalrymple: A letter from Mr. Dalrymple to Mr. Hawkesworth, occasioned by Some groundless and illiberal Imputations in his Account of the late Voyages to the South. John Hawkesworth put together the official version of Cook's first voyage, while the latter prepared for his second trip. Dalrymple here responds with a vitriolic attack. It is ostensibly a complaint about Hawkesworth's presentation, but it more likely hides Dalrymple's resentment that Cook got the call. Dalrymple is extremely critical that no one had been able to prove or disprove the theory of a massive southern continent, claiming he would not have come back in "Ignorance." He was a strong proponent of this theory, which Cook would disprove on his second journey as he sailed through part of the area said to be within the continent's borders. Instead, Cook would establish the size of the more limited Australian continent. Item 89. Price on request.