The Latest Selection from Michel Bouvier 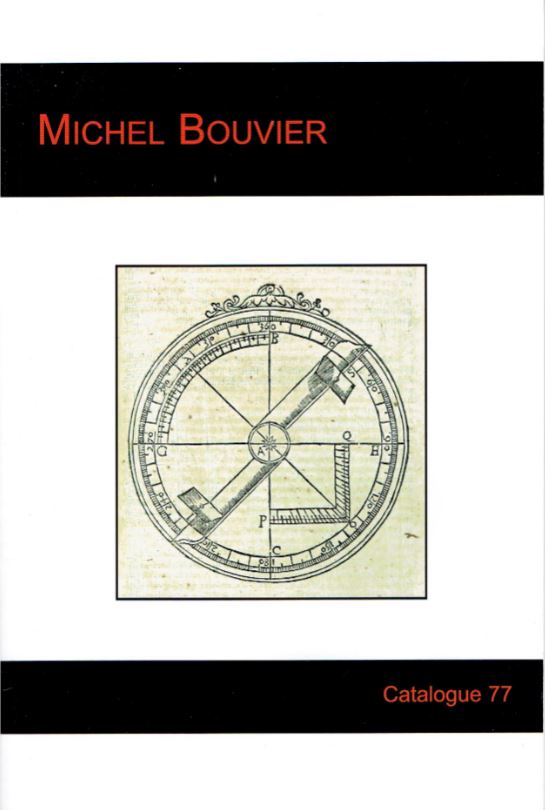 The Latest Selection from Michel Bouvier

Michel Bouvier has issued Catalogue 77. Bouvier is a French bookseller so naturally enough, the catalogue is written in the French language. Most of the books are in French as well, although there is a good selection of texts in German with brief appearances of Latin and Hebrew. These are old books, ranging from a century back to deep into the category of antiquarian, many centuries ago. While most of the French language books are from French authors, there are also several that are translations from other languages. Add to that a few items that are not books at all, but manuscripts from those whose writings also made it to print. Here are a few selections from Catalogue 77.

We will begin with an item that applies to the people of several lands, not just France. Collectors of England, America and Canada will also find it of interest. The title is Mémoire historique sur la négociation de la France & de l'Angleterre, depuis le 26 Mars 1761 jusqu'au 20 Septembre de la meme année, avec les Pieces justificatives. It is a compilation of 31 documents published in 1761 concerning negotiations between France and England to end the Seven Years' War, or as it was known in America, the French and Indian War. It was compiled by Etienne-Francois de Choiseul-Stainville. There were demands back and forth as the nations negotiated what would be the cession of Canada to Great Britain, along with some Caribbean territories to France, and a demarcation of the boundaries of the Louisiana Territory. Other documents detail fishing rights off the coast of Atlantic Canada and protections for various Indian tribes. The negotiations would be completed and the final document, the Treaty of Paris, signed the following year. Item 26. Priced at €350 (euros, or approximately $388 in U.S. currency.

Item 60 is a handwritten letter from the major French novelist Gustave Flaubert, written in 1840 when he was 19 years of age. The recipient was Ernest Chevalier, a schoolboy friend with whom he corresponded regularly for many years. They were close until 1850 when Chevalier married, settled down to a career in the judiciary, and adopted conservative views, unlike those of the liberal Flaubert. The letter was written 17 years prior to his breakthrough as a writer with the publication of Madame Bovary. The letter mentions two men Flaubert admired, the Marquis de Sade and Baruch Spinoza. I'm not sure what those two had in common other than Flaubert's favor. Bouvier tells us the letter is written in a “pornographic style,” which perhaps explains Flaubert's appreciation of de Sade. Sadism, which permeates de Sade's work, can be found to a lesser degree in that of Flaubert. Flaubert shared Spinoza's pantheism and saw de Sade as a similar proponent. €25,000 (US $27,747).

Next we have a work combining two artists of the first half of the twentieth century. The writing comes from poet/novelist/playwright Jean Cocteau. The images come from artist/illustrator/sculptor André Lhote. The title is Escales and it was published in 1920. It features Cocteau's poetry with Lhote's illustrations. Many consider Cocteau's writing surrealistic though he rejected the label for his work. Lhote's illustrations which accompany the poems are broadly related to the writing though not always closely so. There are 36 of his drawings with 12 of them colored. This copy includes the extra suite Musée Secret, with five black and white drawings and some slightly erotic poems. It is not found with most copies. Item 79. €3,800 (US $4,217).

The French are noted for jealously guarding their language from infiltration by foreign words, with varying success. This is obviously nothing new as the argument for the superiority of French over other languages goes all the way back to 1565. The title is Traicte de la Conformite du Language [sic] Francois avec le Grec. The author was Henri Estienne, better known as a printer from a family of printers, though he also translated books from their ancient Greek and wrote three defenses of the French language. Estienne argues that French is superior to all other languages except Greek, which he believed was the perfect language. French best resembles Greek in its structure, he thought, though not derivative from it. It is an interesting argument since French was derivative of Latin, but Estienne believed that Latin had become corrupted, thinking in particular of Italian. Perhaps those sentiments can be understood in relation to another subject of his attack – the Pope. Estienne published a second edition of this book four years later but this time he removed the attacks on the Catholic Church. Item 4. €2,500 (US $2,775).

This is a scientific work published in 1738, entitled La figure de la terre, déterminée par les observations... The author was Pierre-Louis Moreau de Maupertuis. De Maupertuis was France's primary supporter of the theories of Isaac Newton. Newton believed the Earth was not round, but rather, was flattened at the poles. Competing theories had it elongated at the poles or round. De Maupertuis embarked on an expedition to Lapland, an area of northern Finland and adjacent areas of Sweden, Norway, and Russia. From there he was able to take measurements which demonstrated Newton was correct. Item 21. €750 (US $832).