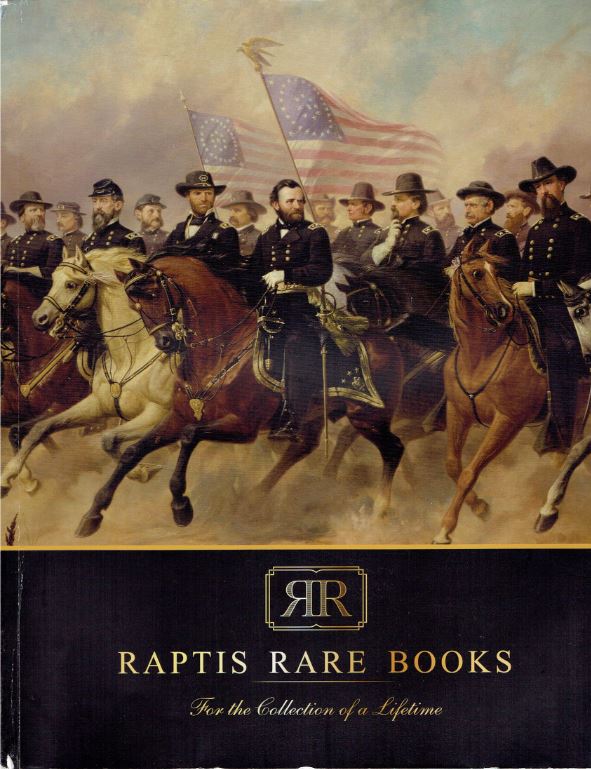 Raptis Rare Books recently released a new catalogue. Raptis doesn't name, number, or describe their catalogues, but they do provide a table of contents. Here is what can be found in this latest selection: Opening Selections, Americana, History & World Leaders, Literature, Music & Performing Arts, Autobiography & Travel, Fine Art & Architecture, Economics, Children's Literature, and Sports & Leisure. Here are a few of the specific items you will find.

We begin with a historic event in the history of the Bible (as opposed to biblical history). Offered is the first printing of what became the standard Protestant Bible, the King James Bible. At the behest of King James, 50 scholars undertook the project of translating the Bible to English over a course of seven years. Their translation made it more compatible to Protestant theology than earlier Catholic translations. The project was completed in 1611, when this first edition was published. However, there were multiple printings of the first edition. This one is the first printing, identified by the misprint “and he went down to the citie” in the Book of Ruth. It should have been “she went down.” And this is yet another reason for having gender neutral pronouns. Item 98614. Priced at $140,000.

Unfortunately, certain literal interpretations of the preceding book got this next writer into deep trouble. Literalist interpretations and science don't always mix. Item 93890 is Systema Cosmicum in Quo Quatuor Dialogis... published in 1635. This is the first Latin edition, preceded only by the 1632 Italian edition, of Galileo's Dialogue. It purports to be a neutral account of a discussion between an advocate of the traditional geocentric, or earth-centered view of the universe, and the Copernican heliocentric, or sun-centered view of the universe. Unfortunately, the presentation by the parties left little doubt that Galileo supported the heliocentric model. That view had been deemed heretical by the Church. It contradicted literal interpretations of the Bible. For example, the Bible has Joshua calling for the sun to stand still in the sky, not for the Earth to stop spinning. Galileo was put on trial for heresy, his book banned, he was forced to recant and was put on house arrest for the remainder of his life. Were he not such a highly respected man with many important friends, he might have suffered an even worse fate. His Dialogue remained on the official banned books list until 1835. $28,000

The Middle Ages have often been referred to as the “Dark Ages” for the lack of advancement in knowledge between the times of ancient Greece and Rome and the Renaissance. However, while it was relatively “dark” in the West, that was not necessarily the case in the rest of the world. Item 90395 is the first printed edition of Opticae Thesaurus Alhazeni Arabis (Alhazen's Book of Optics) published in 1572. Alhazen is the Latinized name of the 11th century Arab scientist and mathematician Hasan ibn al-Haytham and this book is a translation of Kitab al-Manazir (Book of Optics). It was written between 1011-1021 and survived through a Latin translation by an unknown translator in the 12th or 13th century. Alhazen was the first to recognize that vision occurs as a result of light reflecting off an object and passing into the eye. Previous theories included some sort of forms of an object passing into the eye, or from light being emitted from the eye. Alhazen also recognized that vision occurs in the brain, not the eye. Among his other achievements was an early use of the scientific method of testing a hypothesis and using observation to determine its accuracy, an understanding still more than five centuries in the future in the West. $142,000.

Next we have the official accounts of Captain James Cook's three voyages, published in 1773, 1777, and 1784. The first was edited by John Hawkesworth as Cook was back on his second voyage by then, the second was from Cook, and the third by Cook and Capt. James King, as Cook was killed by natives in Hawaii before making it back home. On the first trip he was sent to observe the transit of Venus which would help determine the size of the solar system. On that trip, Cook then proceeded to map New Zealand and was the first European to see eastern Australia. He was also instructed to look for the large southern continent then believed to exist. He did not find it, naturally enough, since it does not exist. On his second voyage, Cook penetrated far south, thereby establishing that this huge continent did not exist. On his third voyage, he charted the Pacific coast of North America and visited Hawaii before meeting his untimely end. Cook named what we now call Hawaii the Sandwich Islands for Lord Sandwich who sponsored the voyage. Sandwich is no longer associated with Hawaii, but was instead memorialized for his idea of placing something between two slices of bread. Item 99465 is the complete set of the nine volumes encompassing all three voyages in their first editions, rather than mixed sets as often the case. $50,000.

This is a remarkable letter, but then again, it was written by a remarkable man. The writer was Nelson Mandela, the leader of South Africa's black people during years of apartheid. He became the country's first President after that racial system was dismantled. However, in the years leading up to the breakdown of apartheid, Mandela was imprisoned. He spent 27 years locked up before finally being freed in 1990. Amazingly, rather than being embittered, he welcomed his release with a call for reconciliation. Item 100160 displays Mandela's remarkable attitude. It was written 1989 in his 27th year in prison. He had been invited to become a patron of the Wilberforce Council, a British organization promoting human rights. It was named after William Wilberforce, a late 18th, early 19th century British politician instrumental in bringing about the abolition of slavery in that nation. He responds that he “readily” accepts the invitation, but there was one problem. Notes Mandela, “My only regret is that my current circumstances will not allow me to play an active role in the affairs of the Council.” He continues, “Human rights is still one of the world's burning issues of the day, and the work and achievements of Sir Wilberforce is as relevant now as it was in his time.” $9,800.