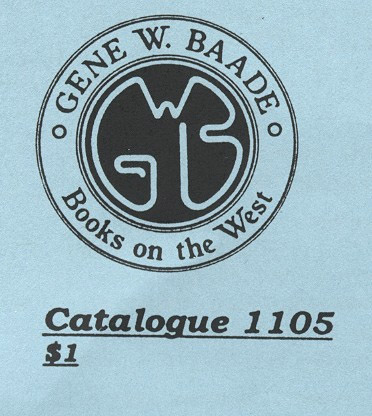 Gene W. Baade Books On The West has released their catalogue #1105 just in time for the holidays. Not that there is any particular connection between this collection and the holidays other than if you are looking for an excuse to give yourself a gift, Baade has provided one. Fortunately, his prices will leave you plenty of room to buy gifts for persons other than yourself. There are many fascinating stories within the covers of these books, so plan on spending some time reading, rather than just admiring them on your shelf. Let's take a look at a few of the titles you will find within this catalogue.

Two books on the life of the notorious James Brothers, written by J.A. Dacus, are available. The first was published in 1880, while Jesse was still alive; the second in 1882 shortly after a bullet brought the final chapter on his life to a close. The James Brothers started their "careers" with Confederate partisans working behind Union lines in loyalist Missouri. The partisans harassed, pillaged, and killed Union soldiers and sympathizers during the Civil War. After war's end, they continued their activities against the Reconstruction forces and businesses. Their activities turned from being part of a political cause to good old-fashioned outlawry. However, many who still harbored Confederate sympathies after the War lionized them as modern-day Robin Hoods. This life would not be all fun and games. They would reap great financial rewards, but be hounded for the rest of Jesse's life. At one point, Pinkerton detectives attacked their family home. A younger half-sister was killed and their mother lost an arm. Finally, while living anonymously under the name D.J. Howard, Jesse was shot and killed by a neighbor looking to collect a reward. Frank would later turn himself in, be excused for his past, and live out a natural life in Oklahoma.

Item 29 is Decus' 1880 edition, Life and Adventures of Frank and Jesse James the Noted Western Outlaws. Priced at $350. Item 28 is the 1882 edition, Illustrated Lives and Adventures of Frank and Jesse James and the Younger Brothers, the Noted Western Outlaws. This edition includes the death and funeral of Jesse James, plus 42 new pages on the Younger Brothers. The Youngers were the James' confederates in crime, until a botched robbery in Minnesota brought their careers on the run to an end in 1876. The James carried on without them until Jesse's death. $150.

Among the most valuable of books are those which inspire successful movies, such as 'Gone With The Wind.' Well, how about a book that started a whole series of movies? Such is the case with Betty Bard McDonald's 1945 classic The Egg and I. You don't remember? This film starred Fred McMurray and Claudette Colbert in a story about a young couple that moves to sticks to operate a chicken farm. The hijinks that result are as one might expect. The story reflected some of Mrs. Bard McDonald's experiences in the backwoods of the Olympics of Washington State. However, the academy award nomination the film received did not go to either McMurray or Colbert, its stars. The nomination was received by Marjorie Main for her portrayal of Ma Kettle.