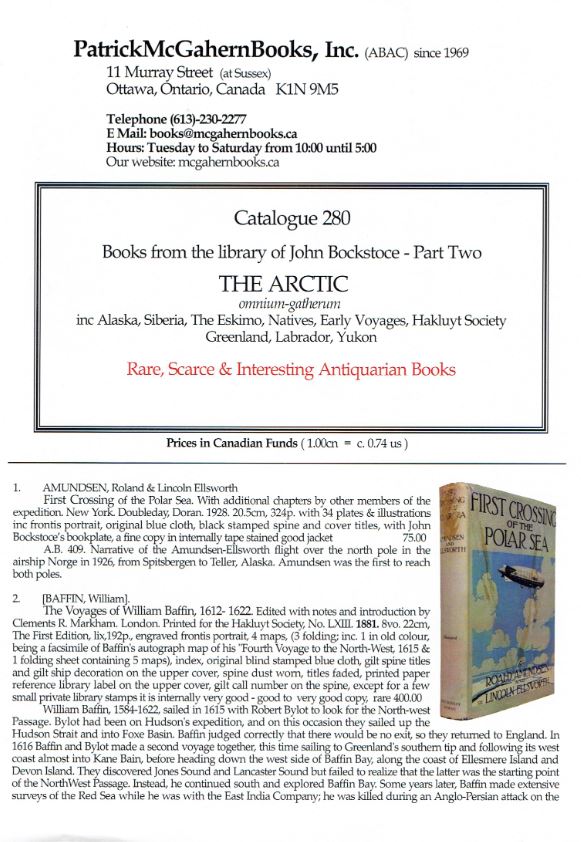 Patrick McGahern Books has issued their second catalogue of Books from the Library of John Bockstoce - Part Two. The Arctic. John Bockstoce is an Arctic expert, author of several books, and one who has made numerous sailing trips to the far north. This includes trips to the legendary Northwest Passage, the sea route north of the Canadian mainland between the Atlantic and Pacific oceans. Unfortunately, it has proven too shallow and frozen too much of the year to be a practical shipping lane, but with climate change, who knows? In July, we reviewed Part One of his collection. Here are some more of his books.

In the West, we are more familiar with the countless attempts to find a Northwest Passage, unsuccessful for centuries. However, attempts were also being made to find an eastern route, that is, one that reached the Pacific by sailing north of Russia. This one proved equally treacherous. Item 3 is A True Description of Three Voyages By the North-East Towards Cathay and China, undertaken by the Dutch in the Years 1594, 1595, and 1596. This is an account of three voyages headed by Willem Barents (or Barentsz). The expectation was that the salty sea water would keep a passageway open through winter, but that underestimated the intensity of the cold. The first two times, Barents reached Novaya Zemlya, but was turned back by ice. On the third trip, Barents discovered Spitsbergen and managed to round Novaya Zemlya, but didn't get much farther. He attempted to return, only to be trapped in ice. It turned into a grueling wintering over, unbearably cold temperatures in a cabin they constructed, waiting for summer. When it finally came, their boat remained trapped and they had to construct a pair of open boats to get back to civilization. Several crewmen, including Barents, died along the way. The author of this book, Gerrit de Veer, understood the situation well. He was the carpenter on the second and third voyages and kept a diary. Originally published in Dutch in 1598 and translated to English in 1609, this edition was published in 1853 by the Hakluyt Society. Priced at CAN $750 (Canadian dollars, or approximately $564 in U.S. dollars).

This voyage of exploration was better than a great many. No, nothing was achieved, but then again, no one froze or starved to death either. There were no casualties. Item 50 is L'Expedition Au Pole Nord (the expedition to the North Pole) by Gustave Lambert. Published in 1868, it might have been a description of the French journey to the North Pole, only it never happened. Lambert describes polar exploration in general and opinions of how to reach the North Pole, which was still 40 years away. Lambert suggested a route via the Bering Strait, the open sea between Alaska and Russia. However, this French journey was never undertaken. CAN $250 (US $184).

Ultimately, the French proved smarter than the Americans by abandoning this route. The Americans, headed up by naval officer George Washington De Long, attempted to reach the North Pole via the Bering Strait. The theory was that relatively warm water flowed up from the strait most of the way to the pole, allowing for a fairly short trip from boat to pole. It didn't turn out that way. Instead, De Long's ship became entrapped in ice north of Siberia. It stayed that way for 19 months when the sea ice finally crushed it. The 33 men were forced to abandon ship. They dragged three small boats south until hitting open water, then made a run for Siberia. Unfortunately, stormy weather arose and the three boats were separated. One disappeared and was never heard from again. Another made it to the coast where the men quickly found rescue. The third, including De Long, made it to the coast, but not close to anyone. Two of the men took off on foot to seek rescue while the others waited behind. Cold and half-starved, the two finally made it to civilization. However, it was already fall and attempts to find the others were unsuccessful. Further attempts had to wait until spring, and when the remaining 11 were located, they were already dead from cold and starvation. The title of De Long's account is The Voyage of the Jeannette. The Ship and Ice Journals of George W. DeLong...commander of the Polar Expedition of 1879-1881. Edited by his wife, Emma De Long, published in 1883. It is based on Mr. De Long's journals and accounts of the survivors, with Mrs. De Long standing in for her husband for obvious reasons. Item 14. CAN $900 (US $677).

The French journey to the North Pole may not be the only one that never happened. Frederick Cook's alleged ascent to the pole is deeply questioned. In fact, few people believe him any more. If true, he would have been the first to reach the North Pole, ahead of Robert Peary (whose claim now is also doubted by some). Cook's account of his allegedly reaching the pole is described in his book, published in 1911, My Attainment of the Pole: Being the Record of the Expedition that First Reached the Boreal Center, 1907-1909. With the Final Summary of the Polar Controversy. Cook's records of his trip were incomplete, and the stories of his two Inuit companions sometimes conflicting. It did little to restore Cook's reputation for truthfulness that he was later convicted and imprisoned for fraud relating to stocks. However, in his defense, Cook had a great admirer in Roald Amundsen, unquestionably the first to reach the South Pole, and possibly the North Pole if both Cook and Peary were faking it. There was no question of Cook's bravery and Amundsen believed Cook had saved his life during the Belgian Antarctic Expedition years earlier. Item 12. CAN $200 (US $150).

William Parry was one of the great Arctic explorers and one of the more successful in searching for the Northwest Passage. In 1819, he headed for the Arctic, navigating his way through icy waters and the islands north of the Canadian mainland. It was a dangerous journey through the ice, but by the end of September, he had made it to (and discovered) Melville Island. It was the farthest west through the Canadian Arctic anyone had yet traveled, but it was as far as they could go. The sea was freezing, so they pulled into what they called "Winter Harbour" on the island and waited for the ice to melt. It was a long wait. Meanwhile, the weather got colder and the sun disappeared, ushering in months of darkness. The men could have gone crazy during the long cold night, but Parry was a smart leader. He organized activities to keep them busy, including putting on plays and publishing a newspaper. That newspaper was called The North Georgia Gazette. It was published from November 1, 1819 to March 20, 1820. It is unclear whether it was originally printed on board or distributed as a manuscript and printed on return to London. Item 66 is a copy of The North Georgia Gazette, and Winter Chronicle, published in London in 1821. The ice finally cleared enough for Parry to sail ten months later, on August 1, 1820. They proceeded even farther west before turning around and heading home before being frozen in again. CAN $800 (US $589).