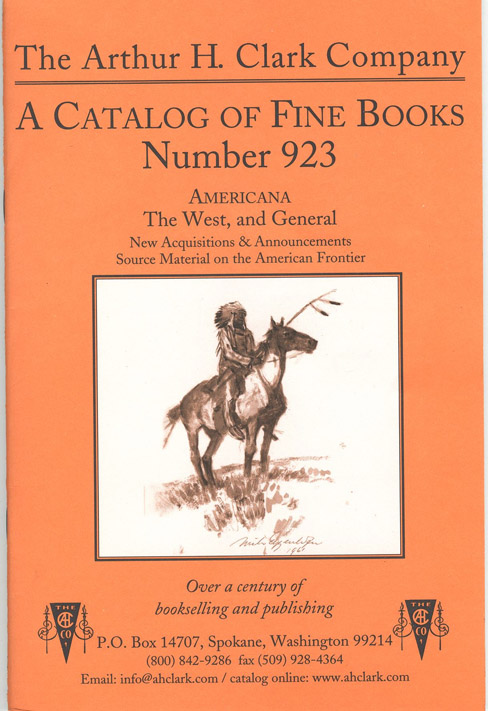 We have just received The Arthur H. Clark Company's 923rd catalogue featuring Americana and the American West. The Arthur Clark Company has been selling and publishing books for over a century, and this Spokane, Washington, firm remains one of the best at finding titles of interest to those who collect or study the Old West. Their selection includes both older material suitable for collecting, and more recent reprints appropriate for reading and learning. There is something here for anyone interested in Americana and the West in particular. Here are a few of the 369 items offered.

Mormon Brigham Young was one of the boldest and most effective leaders America ever had, but not even the best leaders experience universal success. Young promoted a new alphabet, known as the "Deseret alphabet," for 15 years. Not even his enormous influence could convince his people to accept it. In 1854, Young convinced the church to create a new alphabet. This was not a new language, simply a new alphabet which could present English phonetically. Produced at Deseret University (now the University of Utah), the alphabet consisted of 38 letters. Among Young's primary motivations for this phonetic language was that it would enable school children to learn to read much more quickly, so that they could focus more time on other studies. Foreign converts, who learned to speak but not read English, would also be able to learn to read much more easily. Other reasons may have been a desire to make it more difficult for outsiders to eavesdrop on their culture, or to limit what members were capable of reading. As sensible as the motivations may have seemed to Young, the flock wasn't buying, and essentially ignored the new language. Only four books were ever published in Deseret, the Book of Mormon, First Book of Nephi, and two schoolbooks. Item 219 is one of them, The Deseret Second Book by the Regents of the Deseret University (In Deseret phonetic alphabet). This book was printed in Salt Lake City in 1868. By 1870, the new alphabet had been effectively abandoned. Priced at $175.

Finn Burnett was a cowboy, Indian fighter, railroad man, and general son of the Old West in the second half of the 19th century. He seemed to be around for historic events. He was at Fort Phil Kearney in 1866 when the boastful Col. Fetterman led his 80 troops out to defeat the Sioux. They did not return. It was the White man's worst defeat save for Custer's escapade a decade later. Burnett took part in the Hay Field Fight, a successful battle for the Whites. He was also in Promontory, Utah, for the completion of the transcontinental railroad. In his later years, Burnett made his peace with the Indians and dedicated his life to teaching farming to the Indians on the Shoshone Reservation. His story can be found in Finn Burnett, Frontiersman: The life and adventures of an Indian fighter, mail coach driver, miner, pioneer cattleman, participant in the Powder River expedition, survivor of the Hay Field fight, associate of Jim Bridger and Chief Washakie. Item 172 is the 1937 edition published by the same Arthur H. Clark Company that in 2005 published this catalogue. $245.