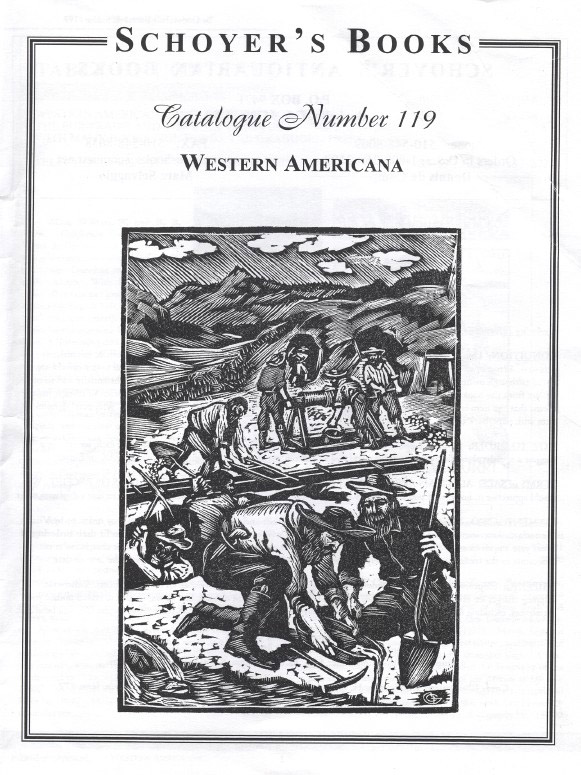 We have received from Schoyer's Antiquarian Books of Berkeley, California, their catalogue number 119 of Western Americana. This catalogue of the West is described as featuring works pertaining to exploration, the fur trade, the California Gold Rush, including many works printed at the famed Grabhorn Press of San Francisco, and many titles from the Zamorano Eighty. The latter is a group of eighty California related texts the Zamorano Club considered the most important for a collection of that state.

Those who find overland journeys to California of interest will definitely want to see this catalogue. You come away feeling that everyone who traveled overland during the Gold Rush wrote a book about it, and Schoyer's has every one. Undoubtedly, this is not true, literacy being what it was around 1850. Nevertheless, Schoyer's has an amazing collection of such travels. They cover the journeys of those well known, such as the Donner party, to obscure fortune seekers who relay what this trip was really like in the days before romanticized novels and interstates. It was not an easy trip. Here are a few of the books to be found in Schoyer's latest catalogue.

John Bidwell was a pioneer of pioneers, though not too many people remember this remarkable man. He was born in upstate New York, but gradually moved west as a youth, to Pennsylvania, Ohio, and then Missouri. As a 21-year-old living in St. Louis, Bidwell read a book about California and decided this was where he wanted to go. He began preaching to others about organizing a wagon train to California. A decade later, this might have been routine, but in 1840, there had never been such a journey west. On May 9, 1841, around 100 people gathered at the starting point. Fortuitously, they learned that a band of missionaries headed by Father De Smet would be leaving for Oregon shortly, to be guided by experienced trail guide Tom Fitzpatrick. They waited. Bidwell would later admit that it is unlikely they would have made it alone, for none in his party had ever been to California nor crossed an overland trail. Sixty-nine people actually left Missouri with Bidwell's party, and when the reached Idaho, they split off from the missionaries who were heading for Oregon. Only 32 remained in Bidwell's party, which trailblazed its way to California; the rest following the missionaries to Oregon. The trip was not easy. They were forced to abandon their wagons in the Rockies, and later ate their oxen. However, when they arrived on November 6th, they were the first emigrant party to make the overland journey from Missouri to the Pacific.