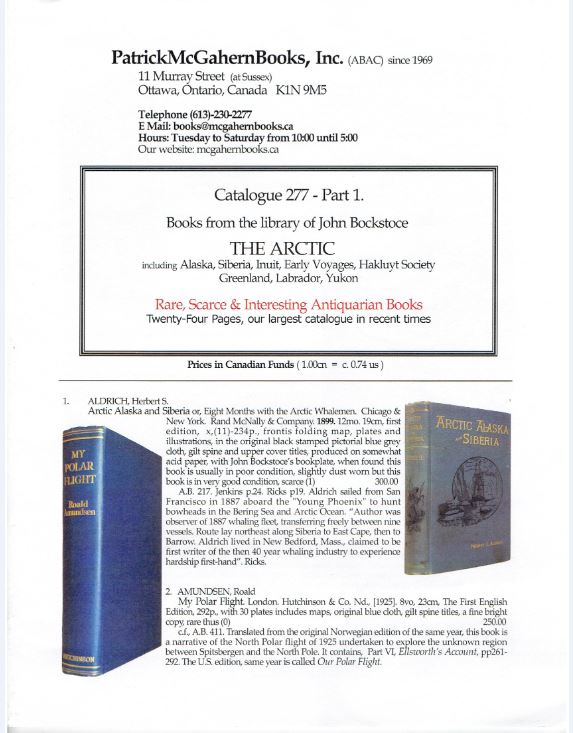 Patrick McGahern Books has published Part I of a catalogue of Books from the Library of John Bockstoce - The Arctic, including Alaska, Siberia, Inuit, Early Voyages, Hakluyt Society, Greenland, Labrador, Yukon. John Bockstoce is someone who certainly would know Arctic bibliography well. He is himself an Arctic explorer, one who has been sailing to the far northern reaches of the Earth for the past half century. He has written numerous books about what he has found, which you can readily find on the internet, but not in this catalogue. This selection from his library consists of books written by others who visited the far north over many centuries, those who shared his fascination with a land whose elements have made exploration a challenge. Here are some of these books.

Bockstoce is known for traveling the Northwest Passage, the long sought shipping route through Arctic waters north of the Canadian mainland, though he was not the first. Actually, many people tried to find the route for centuries and sailed various portions of it, but ice and narrow straits made the route elusive to explorers, though many gave their lives trying. Robert McClure finally found a complete route in 1850, but could not travel through it as parts were icebound. A complete voyage was not achieved until early in the 20th century, when Norwegian explorer Roald Amundsen finally made it all the way. Here is his account, published in 1908: The Northwest Passage. Being the Record of a Voyage of Exploration of the Ship "Gjoa" 1903-1907. Amundsen was not an established explorer yet when he purchased the Gjoa, a 30-year-old ship, and with a crew of six set out be find the elusive route. That he did, but it was hardly the practical shipping route long sought. It took four years to make the journey, and larger ships could not have made it. Ironically, climate change is making for longer summers and the route may become a useful alternative to the Panama Canal if nothing is done to stop the increasing temperatures in the years ahead. Four years after returning home, Amundsen set out on the journey for which he is even better known. In 1911, he became the first person to reach the South Pole. Item 4. Priced at CA $1,800 (Canadian dollars, or approximately $1,353 in U.S. dollars).

Reversing chronological order, next we go back to one of the earliest attempts to discover a Northwest Passage. It didn't get very far. Sir Humphrey Gilbert has something of a mixed reputation. He became a "sir" for fighting rebels in Ireland. His methods were brutal, beheading people as a terroristic threat, killing women and children on the grounds that by preventing them from preparing food the rebel men would starve. Queen Elizabeth was not particularly bothered by his tactics. Gilbert became a Member of Parliament, and as such he pushed for exploration to find a Northwest passage to China. He believed it would give England a trade advantage over their archrival, Spain. However, he was a miserable seaman. His first mission of seven ships failed when they were turned back by storms. A later voyage filled with less-than worthy seafarers did take him to Newfoundland, which he claimed for the British crown. It was to be the first British settlement in America, though Gilbert did little to settle it. He quickly ran out of supplies and had to head back to England. He never made it, his ship sinking into the sea in 1583. Item 32 is The Voyages and Colonising Enterprises of Sir Humphrey Gilbert. With an Introduction by David Beers Quinn. This is a 1940 publication by the Hakluyt Society. CA $200 (US $150).

Perhaps the most noted of the Northwest Passage and Arctic explorers was Sir John Franklin. He made several trips to the Canadian Arctic, but is most remembered for his last, and that was famous because it led to one of the greatest manhunts in history. He and his men departed England in 1845 and were never heard from again. It led to countless search missions, some financed by the British Admiralty, others privately funded through the urging of Franklin's wife. It took 15 years before their fate was determined. They were iced in, ran low on supplies, attempted to travel overland to rescue, but everyone perished from the cold or starvation in the attempt. One of the earliest rescue missions was headed by William Hulme Hooper and William John Samuel Pullen. Unlike most Franklin rescue missions, this one started from the Pacific side of the continent. Hooper and Pullen started from Alaska and headed east as far as the Mackenzie River. They then traveled upriver, wintering over, traveling back down the Mackenzie and east to Cape Bathurst, the northern most tip of continental Canada. They later returned back up the Mackenzie and overland to New York and home to England. Their mission ran from 1849-1851, and by the time they made it back to England, Hooper was seriously ill. Unable to do much else, Hooper wrote his account, Ten Months among the Tents of the Tuski, with Incidents of an Arctic Boat Expedition in search of Sir John Franklin. It was published in 1853. Hooper died the following year. Item 42. CA $2,500 (US $1,881).

While explorers had for centuries searched for a passage north of the Canadian mainland, and some had ventured farther north toward the North Pole, much of northern mainland Canada remained unknown until much later to everyone besides the small number of natives who lived there. The area between Hudson Bay and Great Slave Lake to the west is a vast territory that was virtually unknown when the Canadian Geological Survey sent brothers Joseph and James Tyrrell out to explore the land in 1893. They started at Edmonton, traveling northeast, following the Athabasca River and others to the Wholdaia Lakes, where they found the Dubawnt River. They figured it must lead either to Hudson Bay or the Arctic Ocean. It took another 500-plus miles before they knew it ended where they wanted to go - Hudson Bay. It exits at Chesterfield Inlet, from which the brothers traveled south 400 miles to Churchill and overland another 800 miles to Winnipeg. Item 89 is their account, written by James Tyrrell, Across the Sub-Arctics of Canada: A Journey of 3200 Miles by Canoe and Snowshoe Through the Hudson Bay Region. Including a List of Plants Collected on the Way, a Vocabulary of Eskimo Words, and a Map Showing the Route of the Expedition. This is the 1908 third (and best) edition of a book first published in 1897. CA $250 (US $188).

This doesn't sound like a book about an Arctic explorer: The Love-Life of Dr. Kane; Containing the Correspondence and a History of the Acquaintance, Engagement, and Secret Marriage between Elisha K. Kane and Margaret Fox. With facsimiles of Letters and her Portrait. But it is. Elisha Kent Kane was an Arctic explorer of the middle of the 19th century, an American hero. He took part in two searching expeditions for Franklin, both sponsored by American shipping magnate Henry Grinnell. Kane was a physician, serving as medical officer on the First Grinnell Expedition, and was put in command of the Second Grinnell Expedition. They did not find Franklin, although they did locate one of their campsites. Margaret "Maggie" Fox was one of the three claimed spiritualist Fox sisters. Starting as a prank when Maggie and her younger sister Kate were children, they developed a means of supposedly communicating with a peddler who they alleged had been murdered in their house. It was known as "rapping," but not what is known as rapping today. It was mysterious knocking sounds that were heard when they asked the spirit questions, the number of raps signifying yes, no, or letters. Many people attended their for-money seances, including Horace Greeley, William Cullen Bryant, James Fenimore Cooper, Sojourner Truth, Harriet Beecher Stowe, William Lloyd Garrison, even P. T. Barnum. It's not clear about all of them, but New York Herald Publisher and later presidential candidate Greeley was a true believer.

For some unknown reason, Kane went to one of their seances in Philadelphia. He was immediately taken in by Maggie. Not by her spiritualism - he wasn't fooled by that. He just fell in love with her and she with him. This was not a perfect romance. He wanted her to quit the fake spiritualist stuff, which was not unreasonable. However, he was from a refined, substantial background and she was not. He had no doubt that she was grossly inferior to him and did not belong with a man of his stature. In one of his "love letters," he writes, "...you are not worthy of a permanent regard from me. You could never lift yourself up to my thoughts and my objects; I could never bring myself down to yours." Not the most romantic words ever written. They would briefly pull away, but immediately draw back together. He wished to get married, but his family strongly disapproved. They were sort of engaged for several years. Then, shortly before a speaking tour he made of England, she said they were secretly married, her sisters and a couple of neighbors witnessing a Quaker wedding. Kane was already in poor health. It got worse in England. His doctor sent him directly to Havana for a cure, but he died there, just 37 years old. They never saw each other again. Kane left his assets to his family, but Maggie and the witnesses claimed that a special $5,000 bequest to his lawyer brother was intended for her. They fought for years, finally settled in return for Fox turning over the letters to a third party. She did, they didn't pay, she reclaimed the letters and published this book in 1866. Whether they were actually married remains uncertain. Years later, just a few years before she died, Maggie admitted the seances had been a fraud, the rapping coming from two of the sisters "cracking" their toe joints and other such tricks with their legs. Item 49. CA $400 (US $301).