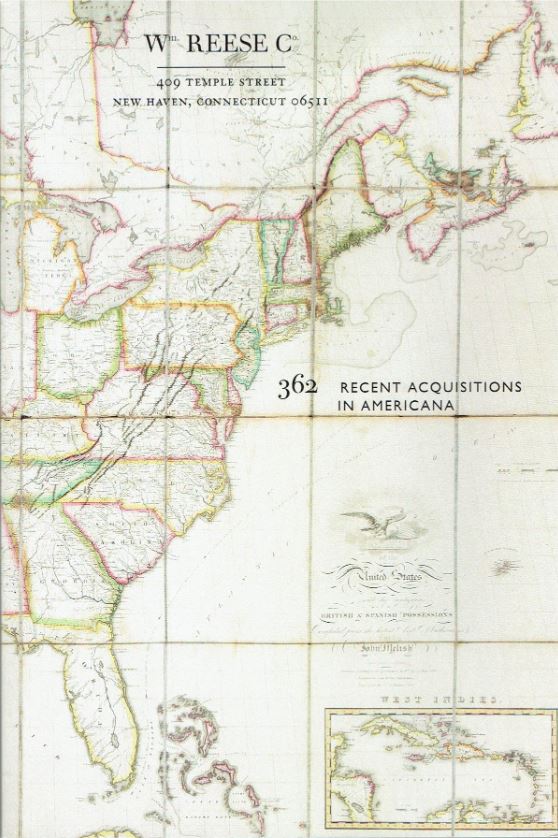 The William Reese Company has issued a catalogue of Recent Acquisitions in Americana. The acquisitions are recent, the material is not. Most items are from the 18th and 19th century. Many are of major importance, including some of the important texts regarding America's natives. Much could be considered political in nature as it pertains to the evolution of the country's governing institutions. Some is filled with enough invective to match (almost) today's politics. America's history was never dull. Here are a few selections.

We begin with an item that contains more than its share of irony when you realize the rest of the story. It is a Reply of John T. Stuart, to an Anonymous Hand Bill, Signed "A Citizen of Sangamon." The writer of the handbill may have been anonymous, but Stuart was quite sure it was his opponent, Archer Gray Herndon. This race was for a seat in the Illinois legislature in 1834. The earlier broadside had accused Stuart of feigning illness during a critical time of the Black Hawk War, along with casting votes based on dubious purposes. Stuart's rebuttal is addressed directly to Herndon, unmasking his apparent anonymity. Now for the rest of the story. Stuart won the election and a second term through 1839. He became friendly with Lincoln when both were serving in the Black Hawk War and his middle name, "Todd," was no coincidence. He was the cousin of Lincoln's future wife, Mary Todd, whom the future President would marry in 1842. Five years before that, Lincoln would go in together with Stuart in a law practice that continued until 1841. Meanwhile, Stuart would run for the U.S. House of Representatives and achieve something Lincoln was unable to do, at least when running for public office from Illinois - defeat Stephen A. Douglas. Lincoln was one of his most ardent supporters. Stuart did not seek reelection in 1842, but returned in 1862 to the congressional seat as an anti-emancipation Democrat. The two remained close until the 1850s when political differences made the relationship chillier, though Stuart would be a visitor of the Lincolns at the White House. Now for one more bit of irony. If the name of Stuart's opponent in 1832, "Herndon," sounds familiar to students of Lincoln, it is because it is that of Lincoln's next law partner after Stuart. Lincoln law partner and biographer William Herndon was the son of Stuart's earlier slanderous opponent, Archer Herndon. Item 124. $3,500.

That race might be considered calm by Illinois standards. William L. May faced off against Benjamin Mills for a congressional seat in 1834. Item 66 consists of three rare broadsides from this election, each attacking one of the candidates, but signed by pseudonymous writers, not their opponents. One, written in response to an anonymous attack on May, describes his accuser as "Some spindle-shanked toad eating man granny, who feeds the depraved appetites of his patrons with gossip and slander." At least insults were more original back then. He continues that the writer is one of those men "who being deprived of their virility endeavor to compensate themselves by the enjoyments of mischief-making..." A broadside on behalf of Mills' candidacy counters with its own Black Hawk War reference, claiming May took credit for shooting a "Dead Indian." It also refers to some "seduction" affair. May, who had the support of Abraham Lincoln, won the election. It seems like Lincoln's endorsement was worth something. Item 66. $6,000.

This next item encapsulates the best and the worst of America, a testament to our greatest contradiction. It is the first appearance of the Star Spangled Banner in book form. Francis Scott Key wrote this poem after witnessing the bombing of Fort McHenry through the night, only to see the American flag still flying at dawn. The Americans had successfully held the fort despite British bombardment during the War of 1812. Key would later attach his poem to the melody of an old song and the rest is history, the creation of the American National Anthem. The flag still waved over the "land of the free." Key's composition was published a few days later in a Baltimore newspaper, but it did not appear in book form until this publication in 1857, Poems of the Late Francis Scott Key, Esq., Author of "The Star Spangled Banner." That is America's greatness. Now for the darker side. The introduction was written by Key's friend, Supreme Court Chief Justice Roger Taney, he of Dred Scott fame. Taney's court decided America's great documents, the Declaration of Independence and Constitution, did not apply to people whose skin was dark. They had no more rights, were no more a part of the "land of the free" than any animal or chattel. Sadly, Key held similarly racist views. He was a Baltimore lawyer and U.S. Attorney whose prosections were hostile to the rights of life, liberty, and the pursuit of happiness for black people. Item 74. $1,950.

Here is another one from the dark side. It came from the Governor of Georgia and, no, it isn't about slavery. Item 55 is The Annual Message of Governor Gilmer, to Both Branches of the General Assembly of the State of Georgia, November 6, 1838. Among the topics is one concerning the forced removal of the Cherokees from their homeland. Says Gov. George R. Gilmer to the legislators, "I congratulate you on the successful removal of the Cherokees from the State; that you will no longer be harassed in your legislative proceedings by the perplexing relations which have hitherto existed between them, the United States, and Georgia, that our citizens are at last in possession of all their lands; and the state the undisputed sovereign within her own territory." What Gilmer euphemistically meant is that the Cherokees had finally been removed from their time immemorial homeland against their will to make way for white settlers who coveted their land. The Cherokees were whisked away on the infamous "Trail of Tears" to resettlement in Oklahoma. An estimated 2,000-8,000 of those sent on this brutal forced march died before ever reaching their destination. Congratulations, legislators. $2,250.

Item 31 consists of 18 issues of The Crisis, a newspaper published in Columbus, Ohio, from 1862-1865. This was not a typical northern newspaper during the Civil War. This was a Copperhead publication, published by Samuel Medary, a pro-South northerner who had been appointed to two territorial governorships by President James Buchanan. The Crisis opposed any limits on slavery, denied that the Union had a right to wage war against the Confederacy, and compared the rebellion to the American Revolution. It supported the gubernatorial race of the most notorious of the Copperheads, Clement Vallandigham, in 1863. The September 24, 1862 issue, in response to the Emancipation Proclamation, screams out, "President Lincoln Succumbs to the Radical Abolitionists...Four Million Blacks Turned Loose upon the Country." Medary was arrested late in 1864 for conspiracy against the government, but died before going to trial. With Medary's death and the end of the Civil War, The Crisis went out of business. $1,250.