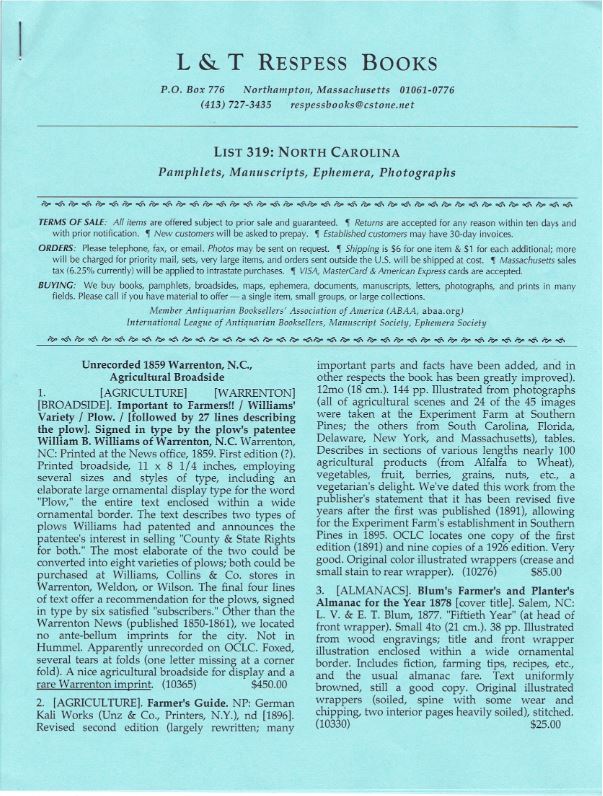 L & T Respess Books recently released their List 319: North Carolina. Not much more is needed to describe the collection. That already targets what is to be found quite specifically. A few things may bleed into South Carolina a bit, but this is clearly targeted to the northern half of the old colony. If this is your specialty, you definitely want this catalogue as there aren't likely to be many with so much pertaining to North Carolina in one place. Here are a few selections.

We begin with an item that seems timely in these days of protectionism and tariffs. Item 21 is The Carolina Shopping List or Carolina Products for Carolina People. This is a second edition (labeled "Volume II") from 1922. It was originally published for the Made-in-Carolinas Exposition held the previous year in Charlotte. The author wanted people in the Carolinas to purchase products manufactured at home, not in such distant lands as China or Virginia. The foreward explains, "The object of 'The Carolina Shopping List' is to promote the industrial progress of the Carolinas by preaching and practicing the 'Buy-at-home' principle; and by compiling and keeping continually up to date a classified list of Carolina manufacturers and their products." Priced at $150.

North Carolina has produced numerous outstanding poets, including Carl Sandburg. This writer probably wasn't one of them though we can't know for sure as nothing about him other than a name is known. That name is W. W. Fulcher. Whoever he was, he created this illustrated manuscript (from "The Poet's Private Press") from 1912-1927: "Froth," Containing Sixty-Five Items in Verse and Prose. Not only has he written the contents, but added some pen-and-ink drawings, four watercolors, and some newspaper clippings. Since this work was never actually published, and surely otherwise unknown, if you purchase it you could claim the writings as your own. I don't know whether this would be wise as Respess has not told us about the quality of the writing and some of the topics are dated. Perhaps the items on youthful romance and pacifism still have resonance, but discussions of World War I experiences would be suspect to claim as there are no longer any survivors of that conflagration, and you certainly don't want to put your name to Negro dialect. Still, this will tell you something of what it was like growing up in the early 20th century. The author has inscribed the copy ("A collection of my best...") and includes an inscribed photograph of himself from 1920. Item 59. $375.

Next is an apparently unrecorded broadside from North Carolina from 1864. It contains a reelection speech given by Governor Zebulon Vance. His opponent had become convinced the Confederacy was not going to win the war and so supported negotiations to bring it to an end. Vance wanted North Carolinians to persevere in their fight. He said, "I have no more doubt now about the establishment of the independence of the Southern Confederacy than I have of my own existence, provided we remain true to the cause we have solemnly taken to support...[North Carolina] will dare endure to the bitter end. The men who suffer are the men who win." North Carolina did endure to the bitter end, but while both sides suffered, only one side of suffering men won, and it didn't include the suffering North Carolinians. While Vance proved to be wrong about the outcome of the war, he nonetheless won reelection handily. And, despite his misplaced certainty in the outcome of the war, he continued believing in his own existence. After the war was lost, he successfully ran for several more offices, again elected governor in 1876 and serving as a senator from 1879 until his death in 1894. Item 22. $4,500.

Here are some of the rules for users of the Rich Fork Telephone Company circa 1915. It was located in High Point and evidently served a few other nearby communities. I have been unable to find out much about this telephone company online, which I thought surprising until discovering a North Carolina Department of Labor publication from 1912 listing well over 100 telephone companies operating in the state. I have no idea how this worked for long distance calls. Rich Fork began operating in the early 20th century and was still in existence as late as 1930. Presumably, it must have been absorbed into the Bell system at some point. Item 111 is the By Laws of the Rich Fork Telephone Co. Evidently, you needed to be a shareholder to have one of their phones. Non-members could use a member's phone, but only if they paid a usage fee. The by-laws explain, "All conversations limited to five minutes, providing anyone is waiting for the line [note: this was the era of party lines]. Anyone, not a stockholder in any line, talking to anyone on any line, 10 cents, due when talking is done, same to be turned in to treasury of Company by person owning phone where talking done." $75.

Item 79 is a promotional piece for land in the areas surrounding Wilmington, North Carolina. Published by the Carolina Trucking Development Co., it is headed, Wealth in Carolina Truck Farms. It is undated but from 1905. The company was offering its land for sale and describes the advantages of its land for truck farming and incentives it was offering to purchasers. It modestly claims, "There is no chance for failure in North Carolina." It provides additional assurances to its prospective white land buyers by saying that Wilmington's "population is composed of two-thirds white and one-third colored, so there is no possibility of negro control in political affairs." Of course, we know there were voting barriers that would have assured that result even if the population ratio was reversed. $150.

Here is a document you won't see anymore, thankfully. It was created by "Nathl Allen, One of the Committee appointed to prevent the spread of Small Pox, Edenton, 13th April 1798." There was an outbreak of the disease in parts of North Carolina that year. This manuscript document enabled Arthur Jones to travel during this time. It states, "Suffer the Bearer Mr. Arthur Jones to pursue his journey; there is no danger to be apprehended of his communicating the Small Pox to any person." Item 106. $275.

This next one comes from colonial North Carolina, dated September 5, 1772. It is a judicial order to the Sheriff of Tryon County to seize goods from John Black in settlement of a debt to John Price. It is issued in the name of George III, "by the Grace of God, of Great Britain, France, and Ireland, King, Defender of the Faith." This is definitely pre-revolution. I don't know how France gets to be included there, as they didn't care for George much more than the Americans did. Tryon County included today's counties of Cleveland, Gaston, Lincoln, Rutherford and Cherokee, plus parts of several others. It was broken up and disappeared in 1779. Evidently, it was all for naught as the verso is marked, "No Goods found Geo. Lamkin." Lamkin was the Tryon County Sheriff. Item 104. $450.