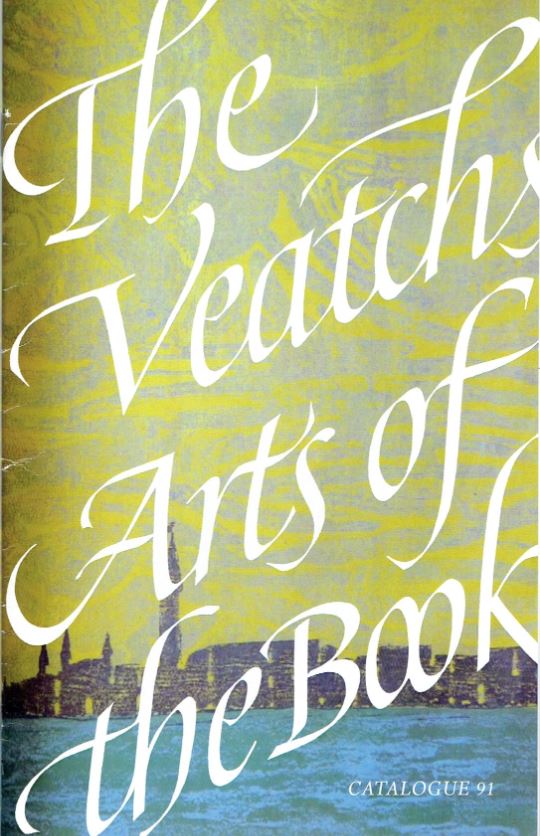 The Veatchs Arts of the Book has released their Catalogue 91 of Recent Acquisitions. It is filled with examples of books as art, art in books, and all the steps involved in turning trees (occasionally something else) into books. That includes a selection of 18th and early 19th century type specimen books. Naturally, there are also selections from various private presses that specialized in creating books as art. Here are a few samples from this latest collection.

We will begin with a document revered in America, the Constitution of the United States. Here is a printing worthy of such a writing. It comes from the Arion Press, in association with the Library of Congress, and was published in 1987 in honor of the Constitution's Bicentennial. This is one of 500 copies, printed on handmade paper in Goudy Deepdene type. There are other decorative features to this printing. While everyone honors the Constitution, it seems we no longer agree on what it means. Perhaps reading it in such a beautiful setting will help us better understand this gift from our founders. Item 2. Priced at $500.

Next we have a collection of book-related art, though not in the form of a book. Rather, it is a portfolio of artwork, 100 Wood Engravings by Barry Moser for the Arion Press Edition of Moby Dick, published in 1979. Moser is noted as an artist and illustrator, print maker, and one of the greatest wood engravers. These illustrations were created for the Arion Press edition of Moby Dick. However, these are separate printings, made from the original wood blocks, #12 of only 30 sets produced. Each engraving is numbered 12/30 and signed by Moser. He must have signed his name 3,000 times to complete the run of just 30 sets. Moser wrote that the Arion Moby Dick is what brought his engravings to the attention of the public, with the Veatchs noting, "the Arion Moby-Dick has been hailed as a 20th century masterpiece of bookmaking." Item 46. $18,000.

Item 8 is a book of poems, though perhaps its high point is the illustrations. The title is Sixteen Poems in Verse & Wood, by Bernard Bockes. It contains 17 French-fold leaves with a poem facing a color engraving. The artist and engraver was George Lockwood, and his illustrations feature insects and various other beasts, real or imagined. This is copy #48 of 150 and has been signed by Bockes and Lockwood. It also bears the bookplate of Harold Hugo, for many years owner of Meriden Gravure. It was published in 1965 and includes a 45 rpm record in a pocket of Bockes reading his poetry. That was also the year the Beatles released their 45 rpm recording of Yesterday, but Bockes' poetry record is far more rare. $485.

This definitely is not a book though it was printed by perhaps the most notable of America's private press book publishers. Item 22 is a collection of items printed by the Grabhorn Press of San Francisco from 1947-1970. These are twenty unused labels for wine bottles. They were printed for Hallcrest Vineyards, Almaden, Bohemian Club, and Ficklin Vineyards. One for the latter consists of four uncut labels on a single sheet. Additionally, there is one for Russian Hill Red 1970 Vintage, which it says was "Bottled in the basement...expressly by & for Robt. Grabhorn." $450.

Next we have the masterpiece of 18th century poet James Thomson, though Thomson's poem has little to do with the appeal of this item. The poem is Thomson's lengthy The Seasons, consisting of four parts, naturally enough. It was very popular in the 18th and 19th century, but modern times have not treated Thomson with the respect or popularity he once had. Item 62 is an extended version of Thomson's poem, The Seasons, To Which is Prefixed the Author's Life, in Manuscript. The creator of this manuscript was one George MacKay of Brussels, about whom we know nothing. It is not his prefix about Thomson that matters. Mackay obviously admired the poet. This handwritten poem contains 303 pages. What is noteworthy is Mackay's calligraphic skills, and particularly, the penned architectural borders around each page, of which there is a great variety. Full page ornamental borders accompany the beginning lines of each season. Mackay was evidently a skilled amateur. The attribution to him is gleaned from a penciled note on a blank page. What appears to be his signature is also found on his handiwork. The Veatchs comment that Mackay "must have had a severe case of writer's cramp after this prodigious effort." It makes Moser's 3,000 signatures look like child's play. $3,200.

The Veatchs Arts of the Book can be reached at 716-648-0361 or veatchs@veatchs.com. Their website is www.veatchs.com