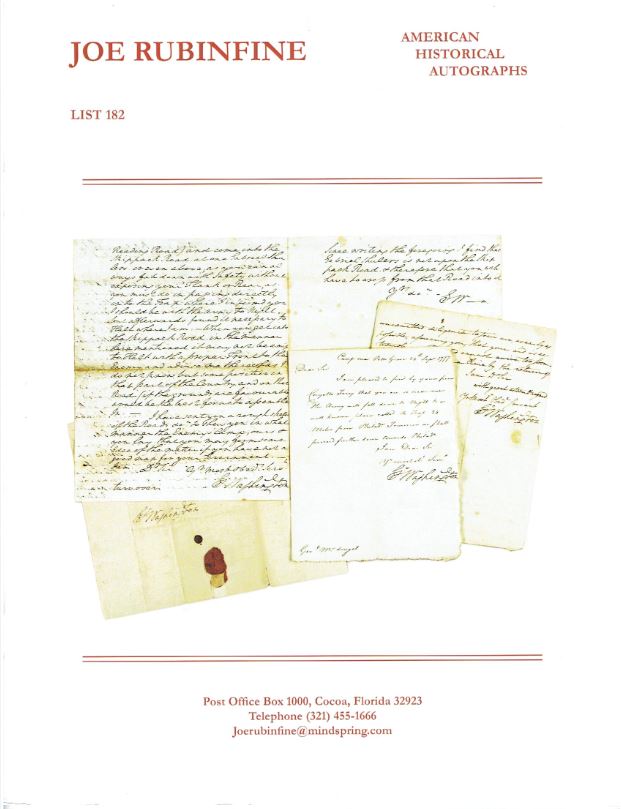 Joe Rubinfine has issued his List 182 of American Historical Autographs. This is an outstanding collection of signed material from some of the best-known and most important names in American history. There are numerous presidential signatures, from Presidents great and not. They range from Washington to Millard Fillmore, Lincoln to William Henry Harrison. The largest group of names with which you (like me) may not be familiar are still very important to American history. There is a wide selection of signers of the Declaration of Independence, those who, unlike John Hancock, did not write their names so large and boldly as to be indelibly embedded in our memory. However, Hancock is here too. Here are a few selections from this exceptional catalogue.

Speaking of Lincoln, here are three poignant letters from Lincoln. No, not that Lincoln. These are from Mrs. Lincoln. Written several years after her husband's assassination, we find life is not easy for Mary Lincoln. It never was for her, even before her husband was killed. They were written to Mrs. Sally Orne, a Lincoln friend from their White House days and a wealthy Philadelphian. Mrs. Lincoln is suffering from a swollen and very painful first finger, now wrapped in cloths, "all arising from the smallest prick of a needle." She can scarcely sleep at night. She also says she is feeling "very anxious" for another Mary Lincoln, her son Robert's wife. However, mother-in-law jokes notwithstanding, Mary Lincoln is very fond of Mary Lincoln, if you will. "[M]y son is so greatly blessed in so sweet a young wife," writes the former First Lady. In her second letter, Mrs. Lincoln writes that she has bruised the thumb on her other hand, making it even more difficult to write. She says that "I have unfortunately fallen upon 'evil times.'" She does add that "Taddie is so grateful to be so kindly remembered by you all & sends his most respectful regards." In the third letter she expresses concern that an attempt to get her a pension will never be approved in Congress. She lists several proponents, including Massachusetts Senator Charles Sumner, whom she fears will be distracted from her situation, but he turned out to be the one who successfully obtained her pension. This time, she does have some good news. The other Mary Lincoln has just had a baby, this Mary's first grandchild. She thinks "Mary" a logical name for the granddaughter, though it might be confusing to have yet another Mary in the family. They did so name her, but she was called "Mamie." As for "Taddie," he was Tad Lincoln, the youngest of her children. The middle two of the four Lincoln children had already died at the ages of 4 and 12, and the tragedies would only continue to mount two years later when Tad also died, age 18. Mary Lincoln's was a tragic life. Item 26. Priced at $25,000.

One great President deserves...another? It would be unfair to say William Henry Harrison was a bad President. The only way to grade Harrison is with an incomplete. Harrison was the President who delivered a long-winded inauguration speech, the longest ever, in the cold rain, got sick, and died only a month into his term. One can only wonder what kind of a President he would have been. Here is a letter he wrote three years earlier to recently elected New York Congressman Gulian C. Verplanck on November 20, 1837. Harrison's opening line is filled with irony, considering his downfall shortly after his inauguration - "Your letter...found me suffering a severe inflammatory rheumatism in the knees from having foolishly exposed myself to the rain when under the operation of medicine for a previous cold." Foolishly exposed himself to the rain? Didn't this man learn anything from this experience? Harrison goes on to congratulate Verplanck on his unexpected election and mentions a connection to help Verplanck's brother in Colombia, but says he really can't delve into deeper connections now because "both my mind and body are in a situation very unfavourable to do any thing." The body concern is the "highly inflamed knee which is exceedingly painful," but worse, the mental issue is "the situation of a beloved son whom an uncurable disease is hanging to his person." That was almost certainly William Henry Harrison, Jr., who died the following year at age 35. Senior also writes that fortunately he has another son only five miles away to write for him. That son may have been John Scott Harrison, a future congressman and father of the then four-year-old future President Benjamin Harrison. Item 37. $8,500.

Next we have a rarity, thanks to the aforementioned President Harrison staying out in the rain too long and lasting only a month in office. It is a letter from Harrison's successor and "accidental President," John Tyler. Tyler does not get a grade of "incomplete." He was a terrible President. Item 38 is a letter of recommendation for an unnamed post to an unspecified correspondent. At least we know who he was recommending, an R. N. Crittenden of Virginia. What makes this March 19, 1841 letter rare is that it was written while Tyler was Vice-President. Just as Harrison was President for only 30 days, Tyler was Vice-President for only 30 days. $3,750.

This is a letter from Thomas Jefferson, itself unique, though unfortunately of a kind Jefferson had to write too often. Jefferson was having trouble paying his bills, a problem that plagued him for much of his life. This one was written on August 9, 1822, when Jefferson was age 79 yet still struggling. He writes to Samuel Garland, an attorney and friend of William Barrett, who evidently held a bond for payment due to Archibald Robertson, a merchant. Jefferson was supposed to be making semi-annual payments of $750 to Barrett. He made the first two, though evidently not quite since he says he paid $1,250, but missed the third payment entirely. Jefferson says he will make the fourth payment next month, but "I doubt I shall be able to make good the omitted installment the next year." The final payment (which he planned to pay before the missed one) was due in March, but he might be late on that one too as he may not have his tobacco crop sold in Richmond quite soon enough for timely payment. Item 25. $31,000.

Here is a letter that connects two of America's founders, one still very familiar, the other not as much. The letter is an offer to exchange land. The writer, the one less remembered, was John Rutledge. He was a delegate to the First and Second Continental Congress, the first Governor (actually President) of South Carolina after independence, a delegate to the Constitutional Convention (he approved it), an Associate Justice of the Supreme Court, and later the Second Chief Justice, appointed in 1795 (four years after this letter was written). That is when he got in trouble. He was a recess appointment made by President Washington in June. That summer, Rutledge gave a speech that was a scathing attack on the Jay Treaty. That treaty was extremely controversial, but it was backed by the Federalists and signed by Washington. When Congress reconvened, it refused to confirm Rutledge's appointment. Rutledge quickly resigned and retired from public life. The recipient was a patriot whose name is still familiar, Patrick Henry. He will long be remembered for the quote "Give me liberty or give me death." He eventually got both, but fortunately the liberty part came much sooner. In this letter, Rutledge suggests that they exchange land, Rutledge's in North Carolina near the Virginia border for Henry's in South Carolina. That would give each land closer to home. Item 1. $5,000.