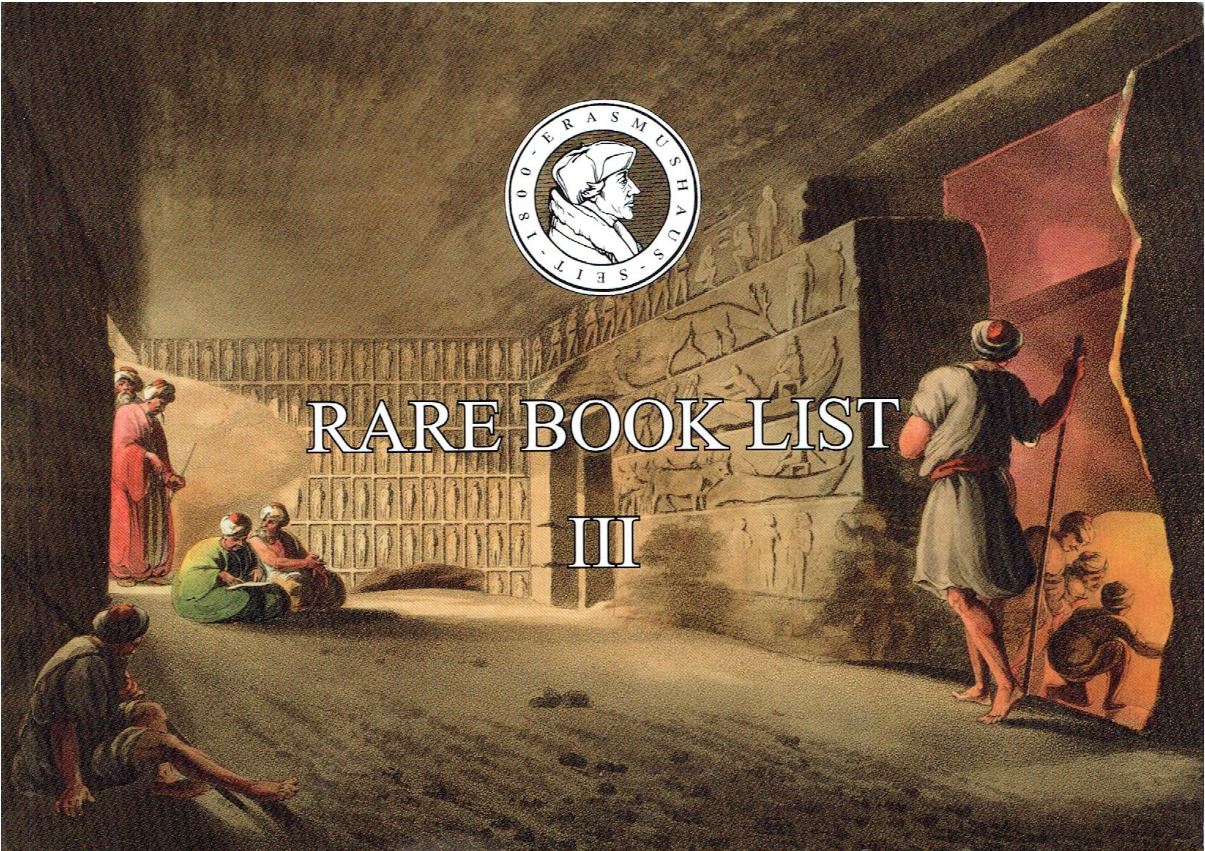 Erasmushaus recently published their Rare Book List III. This one is hard to describe. It is like the bookseller's native Switzerland - a lot of languages are spoken here, no one dominating. There is English, French, German, Italian, Spanish, Russian. Maybe I've forgotten some others. These are antiquarian in terms of dates and subjects are varied. Many feature beautiful illustrations, others more textual. Here are a few samples that may at least give a bit of this selection's flavor.

First up we have a major early work on photography by a scientist, actually a polymath, Sir John Frederick William Herschel. Published in 1842, the title is On the Action of the Rays of the Solar Spectrum on Vegetable Colours, and on Some New Photographic Processes. Herschel, like his father who discovered the planet Uranus, was primarily an astronomer. In the 1830s, he went to South Africa to study the southern stars, but while there, he and his wife created numerous illustrations of flowers with the assistance of a camera lucida. In 1839, Herschel heard in a letter from a friend of Daguerre's experiments with photography, and within a few days, was producing them himself. He quickly came up with a better way of fixing images to paper, and soon was writing papers on the process. His may have been the first published use of the term "photography," along with others he may have created, such as "positive" and "negative." In this work, he expands his findings to discuss his early achievements in color photography. He found that certain vegetable juices responded differently to rays of the spectrum which enabled him to make advances toward the development of a color process. However, Herschel soon turned his attention to other matters and did not continue his focus on photography. This copy was inscribed by Herschel to Eugene Chevreul, a French chemist who studied colors. Item 26. Priced at CHF 7,500 (Swiss francs, or approximately $7,442 in U.S. dollars)

Here is an early photograph album from Chile, though not so early as Herschel's photographs. It contains 69 albumen prints of views from Chile in 1906. There are some panoramic views of the Atacama Desert, a dry strip of land on the Pacific side of the Andes Mountains, one of the driest places on earth. As these photographs attest, it is a barren place. Perhaps the most interesting are the photographs of Valparaiso shortly after the earthquake of August 16, 1906. The San Francisco earthquake of 1906 may be better known, but the Valparaiso one was estimated to reach a level of 8.2 versus 7.9 for San Francisco. The death toll from Valparaiso was higher as well, almost 4,000 compared to 3,000 in San Francisco. Another 20,000 were injured while the damage was immense. Item 16. CHF 3,200 (US $3,172).

French wine-making has been around for a long time, as shown by this book: Traité sur la Nature et sur la Culture de la Vigne, sur le Vin, la Facon de la Faire, et la Maniere de le Bien Gouverner, published in 1759. The author was Nicolas Bidet, who operated a vineyard and later served as sommelier to Queen Marie Antoinette. He passed on of natural causes long before she did of unnatural ones. Bidet produced wines not just for local consumption but was involved in exports to Holland and Britain. Evidently, the British were the most demanding in terms of standards in wine at the time. The book not only discusses wine making, but is illustrated with pictures of grapevines, wine barrels, a wine press, and other equipment used in the process. This is a second and greatly expanded edition of a book first published in 1752. This expanded and "authoritative" edition contains 304 pages compared to 102 in the first. Item 6. CHF 2,400 (US $2,374).

Next we have a German explorer whose name is familiar to those interested in early Native American culture, Prince Maximilian Wied-Neuwied. However, before he came to the United States, he traveled to Brazil, and his account is regarded as one of the best looks at that country around the turn of the 19th century. The title is Reise nach Brasilien in den Jahren 1815 bis 1817 (trip to Brazil in the years 1815-1817) and it was published in 1820-1821. It comes in three volumes, two text and an atlas. Maximilian traveled from the capital up the east coast of the country, much of which was still covered by rain forests. Plates depict images of the Brazilian Indians, sort of a preview of the publication arising from his later U.S. trip. Maximilian and his partners brought back many samples of flora, fauna, and minerals which today are housed in the Museum of Natural History in New York. In the 1830s, Maximilian made his second trip to the Americas where he and artist Karl Bodmer visited various North American native tribes, this account being widely recognized as one of the best looks at these tribes in the days before their cultures were substantially altered by European-American exposure. Item 59. CHF 8,500 (US $8,408).

Now we have a chance to sample a great delicacy for those with a taste for fungi. Item 15 is La Truffe, the truffle, by Adolphe Chatin. Chatin was a French physician, botanist, and mycologist. He was also a member of the Academy of Science, Academy of Medicine, and Botanic Society of France. Erasmushaus describes this as a "remarkable work on all aspects of all sorts of truffles, describing the soil, climate, producing countries, chemical composition, cultivation, harvest, commerce, frauds, nutritional qualities, conservation, and the culinary preparations of the tubercules..." I doubt if all that much has changed about truffles since this was published in 1892, so it is likely still a useful source of information as well as a rare and unusual collectible. CHF 2,400 (US $2,374).