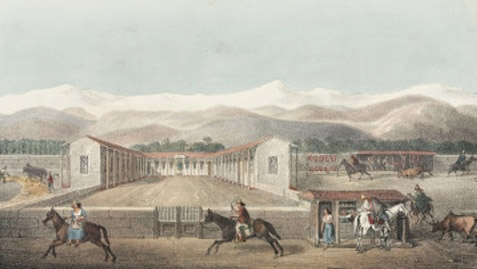 Libreria de Antano has released its latest catalogue electronically, in conjunction with the recently held book show in Madrid. Libreria de Antano is located in Buenos Aires, Argentina, and, as might be expected, there is a Spanish/Latin American influence to the material they carry. However, as you will see, that is not a requirement, so while those who collect Latin American material will be particularly interested in what they offer, others may find some works of interest too. Here are just a few of the items they featured at the Madrid show.

Item 3 is a most interesting Columbus work. Published in 1581, it is a poem, in which the writer imagines that Christopher Columbus relates his travels to Cardinal de Granville, an influential church figure of the time. However, while these conversations never took place (Columbus died eleven years before de Granville was born), this is more than just a fictional account. Author Lorenzo Gambara has carefully consulted the historical sources available to him, so that much of what is written is accurate history. The poem includes geographic data and information about the flora, fauna, and customs of the natives of the New World. This rare early look at America is entitled, De navigatione Christophori Columbi , libri quattuor, and was published in Rome (first edition). Price on request.

Item 31 is Peter Schmidtmeyer's Travels into Chile, over the Andes in the years 1820 and 1821, published in London in 1824. This book includes information on agriculture, mining, metals, history, and customs of the people of South America, Chile in particular. Schmidtmeyer began his journey in Buenos Aires, Argentina, then crossed the Andes, eventually arriving in Santiago, Chile. This rare travel book contains 28 engravings, some with contemporary color. $4,920.