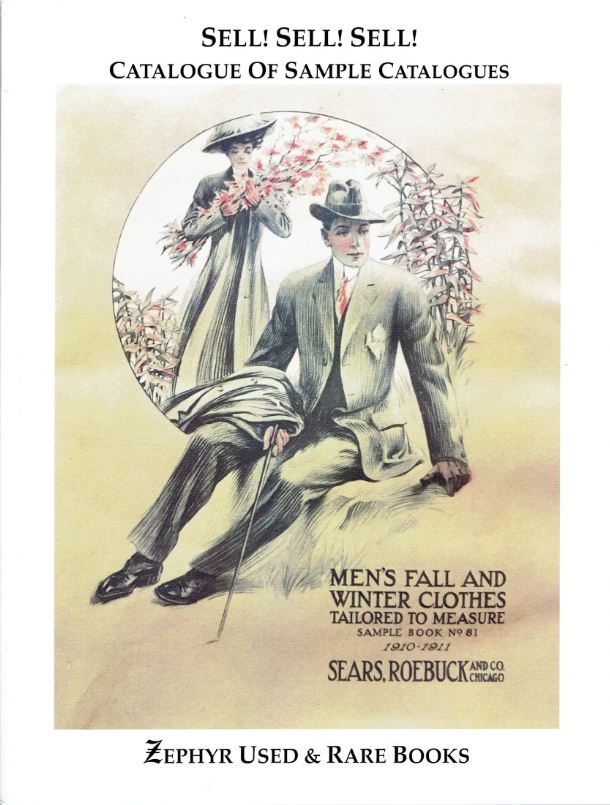 Zephyr Used & Rare Books has created a catalogue of catalogues - Sell! Sell! Sell! Catalogue of Sample Catalogues. Most of these are those thick folders of samples, photographs, literature and such that salesmen took around to their clients. Others were intended for display, to help those clients sell their merchandise through to their customers. As Zephyr notes, in the days before digital presentations, salesmen needed these to provide images of products, their colors, in some cases tactile representations of products like fabrics. This is a thick catalogue, more than you might expect for 189 items, but since these samples were often thick and complex themselves, lengthy descriptions are often necessary. Zephyr also provides us with numerous photographs to enhance the descriptions. You could say this is a bookseller's sample catalogue. Here are a few samples of these samples

Here is sample catalogue for a product that has evolved in ways that never would have been imagined when this was produced circa 1902-1905. Item 125 is a photographic sample catalogue for the S. H. Couch Company, manufacturers of telephones and telephonic equipment. These phones won't provide access to the internet. You'll have to actually talk to the person on the other side, there being no keypads for text messaging. Voice recognition came only when the local operator recognized your voice. Operator assistance was needed back then. These phones didn't even have rotary dials yet. The closest thing to a mobile phone was one designed to be set on a table, which presumably could be moved as far as its cord would allow. Others were designed to be nailed to the wall. Each has a microphone attached to the body of the phone, while the earpiece is separate, on a cord, allowing for some movement of it. S. H. Couch Co. of Quincy, Massachusetts, remained in business all the way until 1985, though in later years it specialized in fire alarms. Samuel Couch himself lived until 1954, long enough to see rotary dial phones, one-piece microphone-earpiece "hooks," and private lines, but not Princess phones. Priced at $650.

If you are looking for a classy new suit, where else would you go but Sears? Unlike many of the companies represented in this catalogue, Sears is still around, though barely clinging to life. Mine closed recently. Hopefully yours is still hanging in there. Even in 1910-11, Sears, or then Sears, Roebuck & Co., did not represent the epitome of high fashion, but every regular person shopped there, and those in the countryside bought from their catalogues. Item 61 is a salesman's sample catalogue with not only pictures, but mounted fabric samples, including wool, silk blends, corduroy and more. It features tailored men's suits, and I imagine it's been awhile since Sears did much individual tailoring. They did sell mostly "Ready Made Clothing," but you could still turn to Sears for individual cuts. There are also vests, overcoats, hats and such with the suits. This catalogue of Men's Fall and Winter Clothes Tailored to Measure for the 1910-1911 season can be seen on the cover of Zephyr's catalogue. $675.

You may be able to live without telephones and suits, but everyone needs donuts. Adolph Levitt, an immigrant from Russia, figured that out around 1920 and developed a huge, if now mostly forgotten, or eclipsed donut business. He had a bakery in Harlem and realized the pastry had been popular among troops during the war. He put them on display and soon found he could not keep up with demand. Levitt responded by inventing a donut machine that could roll them out in large quantities. He began selling his machines to others. That led to his brand, Downyflake Doughnuts, and their popularity was such that he began franchising the brand. Item 105 is a Downyflake franchise promotional, with tipped-in photographs of his donut machine (he called the company Doughnut Machine Corporation of America). It also displays various promotional items available to franchisees, including hand-outs to be included with a box of donuts. This promotional was published circa 1932, and at 5 cents, donuts were hot items even during the Depression. Levitt would eventually have 400 franchises, to whom he sold both machines and ingredients, and also opened a chain of Mayflower Coffee Shops, which sold other foods along with his donuts. These were all over the country, including major locations such as New York's Time Square. Adolph Levitt died in 1953, and the company passed to his children. It changed its name to DCA Industries. DCA was purchased in 1970, and was sold to a succession of corporate buyers over the years, some not well-known, others major names such as Allied-Lyons, Pillsbury, and General Mills. It probably represents some small portion of General Mills' DNA but is indistinguishable from other parts of the company today. Meanwhile, the once popular Mayflower Coffee Shops closed down around 1970. There still remains but one Downyflake Doughnut Shop, operating in Nantucket, Massachusetts. $1,950.

If for some incomprehensible reason you don't like donuts, perhaps you would prefer some selections from Libby's Canned Meats. Item 108 is a sales sample catalogue from Libby, McNeill & Libby. The idea was that their salesmen could show samples of the product cans without having to carry all the cans around with them. Considering this was 1890, the salesmen couldn't stick the cans in the back of a car, so having a book of images instead was far more practical. Along with some more commonplace meats such as corned beef and ham, Libby's offered pigs feet, ox tongues, oxtail soup, cottage head cheese, jellied hocks, and sheep's tongues. Someone please pass the donuts. $450.

This next item is something of a surprise. It is a direct to the consumer, or mail order catalogue for a large product. It is a catalogue of carriages from the Ohio Carriage Mfg. Co. of Columbus. Ohio Carriage was operated by Harry C. Phelps, and his mail order shipping was designed to make his carriages cheaper than other comparable ones. I'm not sure how the mailman delivered one of these things, but obviously that had all been figured out. What is surprising to me about this catalogue is its date, Split Hickory Vehicles for 1916. Was there still a market for horse-drawn carriages in 1916? Evidently so, but Zephyr tells us that after the war, they began producing truck bodies, radio cabinets, and other goods. Item 33. $325.

Item 180 is another salesman's sample catalogue for a product you are in no hurry to buy. It is for the Freedom Casket Company, with images of over 125 wooden and metal caskets, for adults and children. The name was not chosen to represent finally being free of your burdens. It simply states the company's location - Freedom, Pennsylvania. The company is now long gone and buried too, but I imagine that all these years later, their products are still out there quietly performing the task for which they were created. $750.