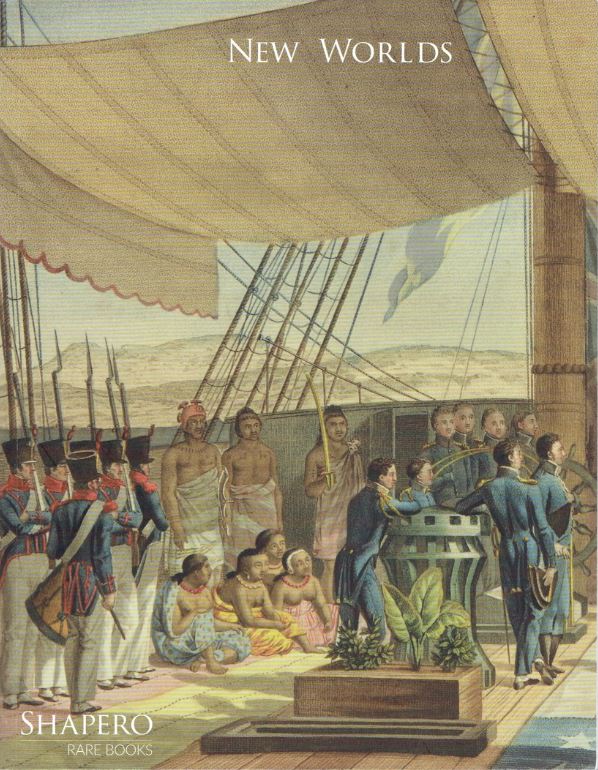 Shapero Rare Books has published a catalogue of New Worlds. European Voyages to the Pacific & Americas. This is quite a selection. There are 115 items and they include some of the most important works of European exploration from the Age of Discovery. If this is what you collect, you will not want to miss this catalogue. Here are a few of these selections.

We will begin with an early summary of voyages up to the beginning of the 17th century. The title is The Principal Navigations, Voyages, Traffiques and Discoveries of the English Nation, made by sea or over-land, to the remote and farthest distant quarters of the earth... The compiler was Richard Hakluyt and the collection was published in three volumes from 1598-1600. This is a second, but preferred edition, as the first was only one-third the size. It was more true to the title of being discoveries by the English nation, while in this second edition, Hakluyt included the discoveries of other nations as well. The third volume is devoted to travels to the New World, also known as the Americas. Hakluyt never traveled farther from England than France, but he corresponded with many of the great navigators and cartographers of his day, such as Drake, Raleigh, Frobisher, Ortelius and Mercator. He also had access to others' accounts. This copy includes the first issue of volume 1 which is important for this reason. It contains Hakluyt's Voyage to Cadiz. This was excised from later issues. It was led by Robert Devereux, Earl of Essex, then a favorite of Queen Elizabeth, but his behavior led to his falling out of favor later on and finally, his being beheaded. Like Devereux's head from his body, his chapter was later removed from the book. Item 54. Priced at $41,000.

Item 97 is the 11th Memorial of Pedro Fernandes de Quiros. A little background is needed to understand what this very rare item is. Quiros had been an able navigator earlier in his career, finally put in charge of his own mission after much cajoling of the Spanish King and the Pope in 1605. He was off to find the mythical large southern continent almost everyone believed must exist and claim it for Spain. In 1606, he accomplished that goal, or at least so he thought. What he perceived to be the tip of the continent was in reality the island of Espiritu Santo in what is now Vanuatu. It is no continent. Evidently, Quiros did not sail around it. He returned home, but his description of his adventures did not particularly impress anyone. Nevertheless, Quiros made an appeal to the King for funding a second voyage where he could set up a colony for his newly proclaimed Spanish land. The King ignored him. And again, and again, and again. Quiros kept sending him appeals, or memorials, over 50 of them. Most were only in manuscript form, but 14 he had printed. All are very rare, as he only printed a handful of each. The Spanish guarded their findings carefully, not wishing other nations to know of their discoveries and steal them, so few copies were printed. Eventually, Quiros' exploits became known when someone leaked a copy of his 8th Memorial in 1612 and others reprinted it. This 11th Memorial, however, was printed in 1611, before the other was leaked. Quiros presented this one 50 months after his first, but the results were the same. Quiros herein requests funding, promises the King riches untold, and asks why he has not yet received approval, closing with a request for a speedy answer. In 1614, Quiros was dispatched to Peru but died shortly thereafter. Only four other copies of the 11th Memorial are known. $170,000.

Here is a book that brought the West its first images of Australia. A heavy price was paid to obtain them, and many are not pretty, such as people being clubbed and hanging from a rope. This is the unpleasant story behind the Dutch book by Francois Pelsaert, Ongeluckige Voyagie, Van't Schip Batavia, Nae de Oost-Indien... published in 1647. Pelsaert was in charge of several ships carrying passengers and goods from Holland to Batavia when the flagship on which he was riding was blown off course. They crashed onto an island off the west coast of Australia, many lives were loss, while a couple hundred made it to land. Water supplies were inadequate, so Pelsaert and a few others headed for the Australian coast in search of water. It was the first recorded landing on the continent. Unaware of their accomplishment, and not finding water, Pelsaert took off for Batavia to get help rescuing the survivors. It took a month, but he obtained a ship and returned. What he discovered was a horror. One Jeronimus Cornelisz, in cohorts with the ship's captain, Adriaen Jacobszoon, and others, had taken control and instituted a reign of terror. They had already killed 125 of the survivors, and a few others were stranded on a separate island after being sent there to find water. That group reached Pelsaert first, told him what had happened, and he quickly took control. Seven mutineers were hanged on the spot, while six others were convicted and executed after being tried in Batavia. Two more were punished by being left on the Australian mainland. They became the continent's first, albeit reluctant, settlers. Their fate is unknown. Item 87 is the very rare first edition of this first look at Australia. $375,000.

Next is a set that recounts what turned out to be the source of one of the most historic scientific discoveries ever, though it wasn't obvious at the time. Item 37 is the Narrative of the Surveying Voyages of His Majesty's Ships Adventure and Beagle, Between the Years 1826 and 1836, Describing Their Examination of the Southern Shores of South America, and the Beagle's Circumnavigation of the Globe, published in 1839. There are three volumes and an appendix. The first was Capt. Philip King's account of a journey from 1826-1830, the second Capt. Robert Fitzroy's account of the second trip from 1831-1836. The third volume is the important one. It is an account of the discoveries in natural history made on the second voyage by its naturalist, Charles Darwin. Don't expect any discussion of evolution here. What it describes are the findings he made, including comparisons between life on the mainland and offshore islands. It was the facts that he amassed on this expedition that led Darwin to conclude that life forms evolve from earlier ones. While he put together his theory in the early years after his return, Darwin would not reveal them to the public until two decades later. This copy belonged to, and carries the bookplate of William Gladstone, who served four terms as Prime Minister of Great Britain between 1868-1894. $40,500.