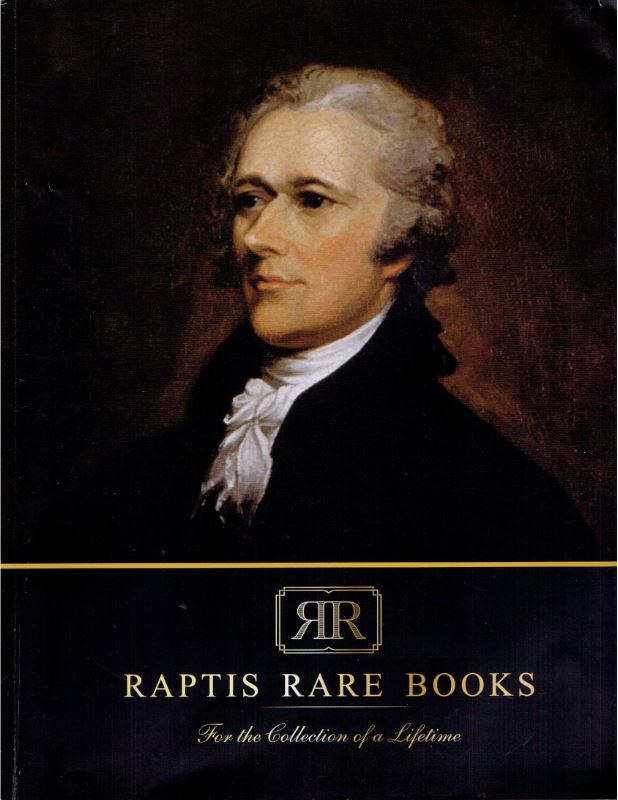 Raptis Rare Books has published a catalogue Presenting 80 Great Works. They have broken the selections down to seven categories, Opening Selections, History & World Leaders, Americana, Scientific Discovery, Business & Economics, Literature, and Children's Literature. These are great works all. Here are a few samples.

Would you like to learn how to draw? There is no better way than to learn from the master. However, you will need to brush up on your Italian. Item 95780 is Trattato della Pittura di Leonardo da Vinci (treatise on painting of Leonardo da Vinci), a first edition. While this is a very old book, published in 1651, you may recall that da Vinci lived during an even earlier time. He died 132 years before this first edition was published. Da Vinci's notes on painting had been compiled by a student and passed around in manuscript form, but were not printed until all these years later. Da Vinci was not only the painter of Mona Lisa and other great works, but a scientist, inventor and anything else he wished to be, the ultimate Renaissance Man at the beginning of the Renaissance. Herein, the master gives his advice on lighting, perspective, and other aspects of the art of drawing. Priced at $7,500.

This next gentleman would not be called a "Renaissance Man." Rather, he had one particular skill at which he was good, more so then anyone else of his era, and when compared to his contemporaries, like no man ever. Babe Ruth could bash a baseball like no one else. The result is he is still the best known baseball player ever, though it has been over eight decades since he last played ball. Item 95879 is The Babe Ruth Story, an autobiography of the Babe, as told to sportscaster Bob Considine. Ruth discusses the high and low points of his life, his friendships, loves and feuds, and his career. Recently, an average ballplayer made news when he said he could play better than Ruth. His point was that far greater demands are made on baseball players today. Ruth was not known for a conditioning regimen such as demanded of players today. His energy drink was beer. Still, one must be seen in his time, compared to his contemporaries, and for a current baseball player to out-power hit Ruth by the same margin on that basis, he would need to hit a couple hundred home runs per year. Ruth was that dominant. This copy has been inscribed by Ruth "To my good friend Ed Tillman." The book was published in 1948 and evidently Ruth signed it before the middle of the summer, perhaps at a spring book signing he attended, as he died on August 16 of that year $11,000.

Next is a first edition, first printing of what Raptis describes as "one of the most important works in the history of American literature." That comment is actually fact, not hyperbole. Item 95139 is Tales by Edgar Allan Poe, published in 1845. It is the granddaddy of detective fiction, and you could throw in mystery, science fiction and such as well. It is a collection of short stories by Poe, whose tormented life probably prepared him for such writing. Haycraft-Queen's list of cornerstones of detective stories describes it as "the first and greatest, the cornerstone of cornerstones in any readers' or collectors' guide, the highest of all high spots." It contains three Auguste Dupin stories, including The Purloined Letter, and other mysteries such as The Gold Bug, The Black Cat, and The Fall of the House of Usher. $35,000.

It is common for First Ladies to publish memoirs today, but that was not always the case. Here is the first such First Lady memoirs published during the author's lifetime. The writer was Helen Taft, though, in keeping with the times, it is attributed to "Mrs. William Howard Taft." The title is Recollections of Full Years, and it was published in 1914. Julia Grant had attempted to publish her memoirs, but could not find a publisher, their finally reaching the press in 1975. Taft was not a lucky President. He served as Vice-President under Theodore Roosevelt, and was hand-picked as his successor by the latter when he unexpectedly declined to run for a second term. However, Taft proved not to be the progressive Roosevelt expected, leading T.R. to run against him as an independent when Taft sought reelection in 1912. The result was that Taft finished third, while Woodrow Wilson was elected President. This copy has been signed by both Helen and William Howard Taft. Item 95234. $6,800.

Next is a pioneering work in the field of space travel, The Astronauts: The Story of Project Mercury, America's Man-In-Space Program. America was caught flat-footed when the Soviet Union became the first country to put a man in space. The nation had some catching up to do, and acted quickly, initiating the Project Mercury program. It would take a few years to catch the Soviets, and finally overtake them in 1969 by putting the first man on the moon. This is a special copy. It has been inscribed to a Pearl Salvick by all seven of the original Mercury astronauts (using their formal names) - John H. Glenn, Jr., Walter D. Schirra, M. Scott Carpenter, Virgil I. Grissom, Donald W. Slayton, Leroy G. Cooper, Jr., and Alan B. Shepard, Jr. Alan Shepard was the first American in space, sent on a suborbital flight in 1961, the year after this book was published. "Gus" Grissom was the second American in space and, with two others, the first to die on a space mission when their space capsule caught fire on the ground during a pre-flight test. John Glenn was the first American to orbit the earth, later was a U. S. Senator, and then became the oldest man in space many years later when he flew at the age of 77. He was the last surviving Mercury astronaut when he died in 2016. "Deke" Slayton took part in the first joint American-Soviet mission in 1975. Item 95986. $12,500.