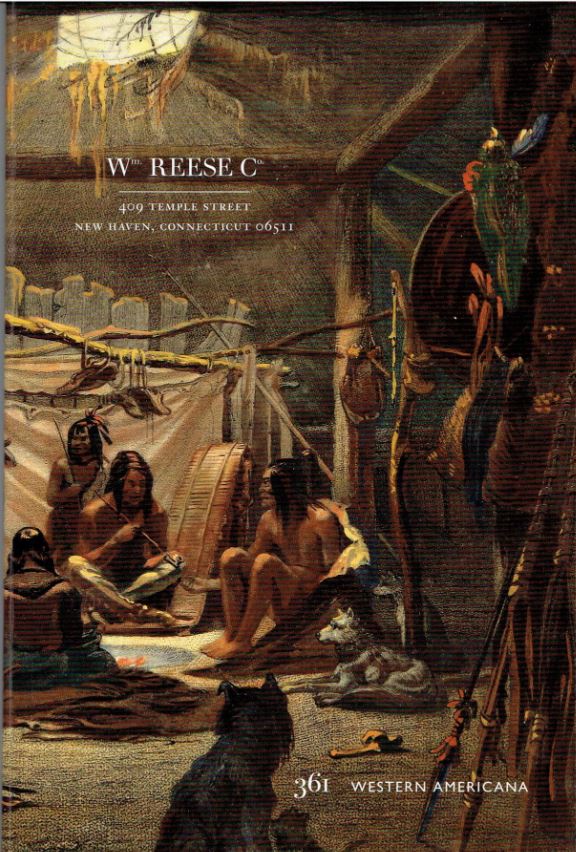 The William Reese Company has published a new catalogue of Western Americana. While a few entries date to slightly before or after, most items arise from the 19th century. At its beginning, the American west was virtually unknown to European eyes, other than a few Spanish missionaries in its more southern regions. By the end of the century, it was highly populated with European immigrants, farms and cities, traversed by railroads, the land divvied up between government and private ownership, with a few small "reservations" left for the land's natives. It all happened so quickly and irretrievably. With those lands still reserved for public trust under assault today, it's hard to imagine there was once a time when the land seemed unlimited. Here are a few items from this latest Reese collection of the American West.

While settlement of the West was a wide-ranging, and ongoing process, nothing quite captured the public's imagination like the journey over the Oregon Trail. Tens of thousands of immigrants from east of the Mississippi made the long trek by wagon and foot, across the endless plains and challenges of the high mountains, to make their way to a new life in Oregon. In the days before the completion of the transcontinental railroad, there was no other way other than the long, expensive, treacherous boat trip around the southern tip of South America. So they came, with little to guide them other than a few books by those who preceded them. Here is one of the first: Route Across the Rocky Mountains; with a Description of Oregon and California... by Overton Johnson and William H. Winter, published in 1846. The authors made the journey in 1843, with Winter moving on to California before returning to Indiana in time to publish this guide for the 1846 season. Along with an account of the trip out and back, the book provides information about Oregon and California and events in those lands. At this early time, Britain still made claims on Oregon, and California was part of Mexico. This is a rare book, rated a "d" for rarity by Howes. Item 66. Priced at $13,500.

In the days before the Transcontinental Railroad and feeder lines from outlying territories, supplies had to be carried across the West by pack mules or wagons. One company offered a solution in 1865, described in this privately circulated prospectus: Overland Traction Engine Company. Transportation by Steam from the Missouri River to the Rocky Mountains. They were prepared to fill the gap between available river travel and the Rockies using a steam engine that could haul supplies with a powerful engine overland. It needed no rails like trains, so laying of tracks was unnecessary, and travel was not limited to established rail routes. It could go anywhere... almost. They neglected one factor. The powerful 54-ton steam engine could run over rough terrain, but not through mud. On its initial run, it got stuck in the mud. Metal rails above the ground served an important purpose after all. Item 91. $3,500.

Next we have the Governor's Message, to the Legislative Assembly of Utah Territory, January 5, 1852. The Governor was also the leader of the Mormon Church, Brigham Young. This early Utah printing covers various suggestions of Young, including the publication of territorial laws and locating the capital in Fillmore. Perhaps most interesting is Young's comments on slavery. It was long one of the church's most controversial doctrines that black men were not eligible for priesthood, which greatly limited their other rights within the church. The justification is what is commonly known as the "Curse of Ham," who saw his father's nakedness, though the curse was actually placed on Ham's son, Canaan. Canaan was cursed by Noah to serve others. Somewhere along the way, someone decided that part of the curse was that those descendants have a black skin, and though the Bible says no such thing, it provided a justification for black slavery. With that background, and Young's acceptance of the curse theory, the views he expresses on slavery are somewhat surprising. Says Young, "My own feelings are, so far as natural rights are concerned, that no property can or should be recognized as existing in slaves, either Indian or African. No person can purchase them without their becoming as free, so far as natural rights are concerned, as persons of any other color....Thus will a people be redeemed from servile bondage both mental and physical, and placed upon a platform upon which they can build; and extend forth as far as their capability and natural rights will permit, their thralldom will no longer exist..." But, in recognition of the curse doctrine, Young concludes, "...although the seed of Canaan will inevitably carry the curse which was placed upon them, until the same authority which placed it there, shall see proper to have it removed." In 1978, the then Mormon leader had a revelation that that authority had removed the curse, and in 2013, the Church went further and said that the doctrine was always wrong. Item 141. $3,500.

There wasn't as much written about it as there was for Texas or California or Colorado, but that just makes material like this harder to find. This is what Howes described at the first "full-scale history of Idaho," and that didn't come until 1884. Item 60 is History of Idaho Territory Showing Its Resources and Advantages, with Illustrations Descriptive of Its Scenery, Residences, Farms, Mines, Mills, Hotels, Business Houses, Schools, Churches, &c. As the title suggests, this is a thorough look at Idaho, a beautiful if remote state in 1884. It also provides information about Idaho's natural history, climate, history, biographical sketches of prominent citizens, and descriptions of its native people, which show a non-native American's biases. The Pend d'Oreilles are described as "peaceable, industrious, and in the main self-supporting." Perhaps they are seen more favorably because "many of them have adopted the dress, and, in a measure, the customs and habits of civilized people." On the other hand, the "Kootenay's are indolent, thriftless people, too cowardly to fight, too indolent to work, and many of them too lazy to hunt..." $6,000.