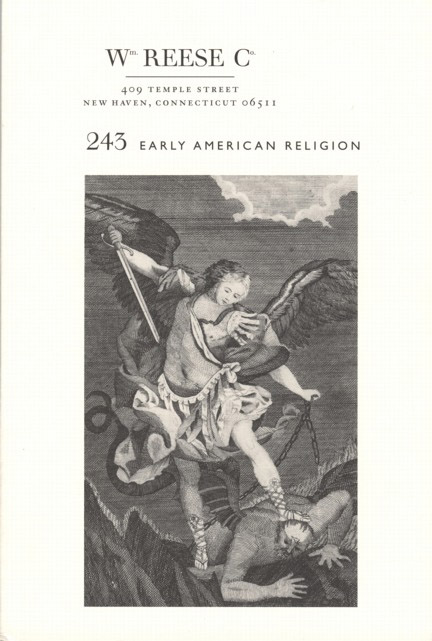 You might think a collection of religious material from the 17th through 19th centuries would be rather boring. We've all heard that fire and brimstone stuff too many times before. You would be very wrong if that's what you thought. The William Reese Company has issued its 243rd catalogue, Early American Religion. It is an absolutely fascinating look at early America, and the values and beliefs that shaped the thinking of the settlers.

There have always been struggles between fundamentalists and reformers, even in the days when most people took a very literalist view of the Bible. In 1700, Increase Mather was already complaining about the liberal tendencies of some younger preachers, and you will find his laments herein. Of course there is always religious intolerance. In 18th century America, the Quakers were often on the receiving end. By the 19th century, it was the Mormons who became religion's favored whipping boy. Of course, Catholics were always good for prejudice. Ironically, Catholicism finds its share of intolerance from the pen of William Penn, America's early Quaker leader. That was the young Penn. The older Penn becomes a much more tolerant individual, perhaps from his experience with abuse heaped upon the Quakers.

Then there are the Indian Bibles. Missions were sent out to virtually every Indian tribe in the land, with missionaries painstakingly translating the Bible into all types of native tongues. Today we might regard the missionaries as a bit dismissive of the religious beliefs and practices of the native tribes. However, in a land where too many settlers were more interested in stealing their land if not just plain killing them, the missionaries were likely the most humanitarian white faces the Indians encountered.

We mentioned that William Penn expressed some rather narrow-minded views early in his life. A recent convert to Quakerism, Penn expressed these views in his 1670 pamphlet, A Seasonable Caveat Against Popery. In it, Penn attacks certain Catholic beliefs, using Scripture to assail them, and states that Catholics cannot be trusted because their faith cannot accept "heretics." At the time, Penn was writing from Ireland, where he feared Catholicism was making inroads. Item 132. Priced at $2,500.