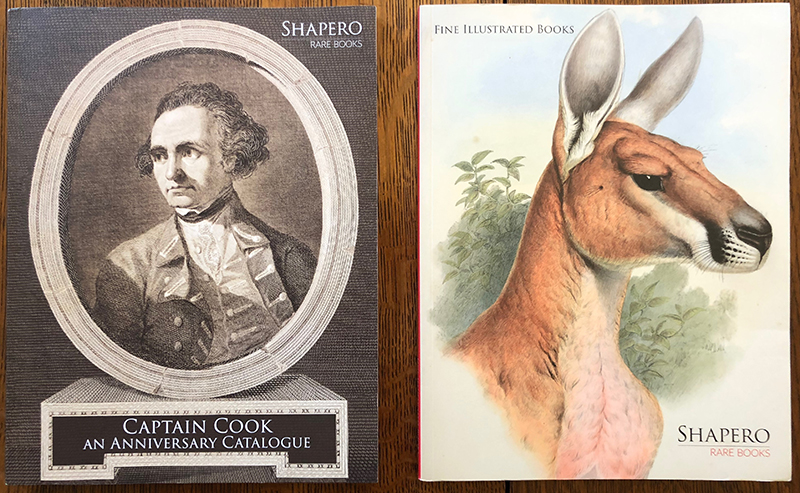 Two catalogues from Shapero Rare Books were received this month at Rare Book Hub—Fine Illustrated Booksand Captain Cook: An Anniversary Catalogue—and they are both impressive for different reasons. Fine Illustrated Books demonstrates the vastness of the field, with maps, natural history, art, and Hebrew material some of the representatives. In an era where visual works are highly sought after, there is something appealing for the serious collector of many different individual subjects contained within. Captain Cook, on the other hand, reflects the opposite side of the collecting spectrum: an intense focus on a singular subject. Even with this sort of focus, it’s not just books that can make up a collection, and this catalogue offers a fair amount of prints, several medals and portrait medallions, and a painting as well.

Fine Illustrated Books features 50 lots, with asking prices beginning at £9,500 and topping out at £300,000. This is serious material consistent with what the field has come to expect from the firm. So, you might be wondering what the £300,000 item is. Item #12 is Maxime du Camp’s Vues on Egypte, Nubie, Palestine et Syrie. Dessins photograhiques recueillis pendant les annees 1849, 1850, et 1851, accompagnés d’un texte explicative et précédés d’une introduction par Maxime Du Camp, chargé d’une mission archéologique en Orient par le ministère. The work is described as “a landmark in the history of the photobook, illustrated with 125 salt prints. This famous volume is renowned for its stark images, a radical departure from the Romantic model.” Two full-page examples of the photographs (and another occupying half a page) are included in the catalogue, and they are striking to say the least.

Natural history is a particularly strong part of the catalogue. Daniel Giraud Elliot’s The new and heretofore unfigured species of the birds of North Americawas said to be intended as a supplement to both the works of John Audubon and Alexander Wilson, and with its 73 hand-colored lithographs of birds not included in either of their publications, it certainly seems to make sense as such. You can find it as item #14 with an asking price of £27,500. Several items later we see the work that boasts the catalogue’s cover art: John Gould’s The Mammals of Australia. First edition sets (here offered in three volumes) of Mammalsare rare, in no small part because it was issued in thirteen parts over no less than eighteen years (1845 to 1863). The effort of collecting such a work, which additionally serves as visual evidence of many species now extinct, does not come with small cost: asking £150,000. Further offerings include Jean-Louis Prevost’s Collection des fleurs et des fruits peints d’apres nature (item #38, £75,000), Henry Sander’s Reichenbachie. Orchids illustrated and described (item #41, £37,500), Richard Bowdler Sharpe’s Monograph of the paradiseidae or the birds of paradise and ptilnorhynchidae or bower-birds (item #43, £42,500), and Robert John Thornton’s New illustration of the sexual system of Carolus von Lannaeus comprehending… the temple of glora, or garden of nature(item #47, £125,000). It’s a strong assemblage indeed.

One item of personal interest to me, with family from Taiwan and having lived there for a time myself, is the last item in the catalogue. This is the Pingding Taiwan deshung tu [Victorious Battle Prints of the Taiwan Campaign.] Comprising twelve prints depicting the Qing dynasty’s Taiwan campaigns against bandits and Ming loyalists between 1787 and 1788. This set is quite rare and is notable for its vivid depictions of both seascapes and naval battles. In a catalogue made up mostly of western material (though there are several items related to India), this Taiwan item makes up for a nice wrap up to the catalogue.

It’s been 250 years since Captain Cook departed on the HMS Endeavour for Australia and New Zealand, and to commemorate the anniversary, Shapero Rare books has released the catalogue Captain Cook: An Anniversary Catalogue. It contains 88 various items, though, as one would expect, the majority are books—63 of 88. Asking prices for books range from £350 to £150,000, while the rest of the catalogue, dubbed “pictorial items,” begin at £150 and max out at £45,000. And while Fine Illustrated Books is organized alphabetically by author, Cookillustrates a key strength of focused collecting: a chronological ordering of items that together tell the story of one history’s most famous mariners.

The material amassed for sale here is varied enough that there are entry points for both new and established collectors with a range of collecting budgets. For example, several editions of James Magra’s A Journal of a Voyage round the World in His Majesty’s Ship Endeavour in the Years 1768, 1769, 1770, and 1771 are offered. Magra’s account is the first detailing Cook’s first circumnavigation, and also contains the first printed account of the east coast of Australia. Item #3, the rare first issue of the first edition, carries an asking price of £37,500, while items #6 and #7, the first Irish and French editions respectively, are both priced at £2,250.

The item with the highest asking price is a book, but surprisingly, it’s not the pages of the book that make it valuable. Alexander Shaw’s [A Catalogue of the Different Specimens of Cloth Collected in the three Voyages of Captain Cook] contains several full-sized samples of cloth and smaller, more common “snippets” (39 samples of tapa cloth total). Evidently artifacts from Cook’s voyages themselves carry a premium, and this work is very rare. Of 66 known copies, 57 are in institutions, 6 in private hands, and 3 copies unknown. Additionally, no two copies are identical. As item #41, Shaw’s Clothis priced at £150,000.

Both Fine Illustrated Books and Captain Cookare high quality catalogues with the material to back up the presentation. Fine Illustrated Books is accessible online here, and Captain Cook is viewable online here. Shapero Rare Books’ store is located in London at 32 St George St, Mayfair. You can get in touch via telephone at +44 (0)20 7493 0876 or through email: rarebooks@shapero.com.