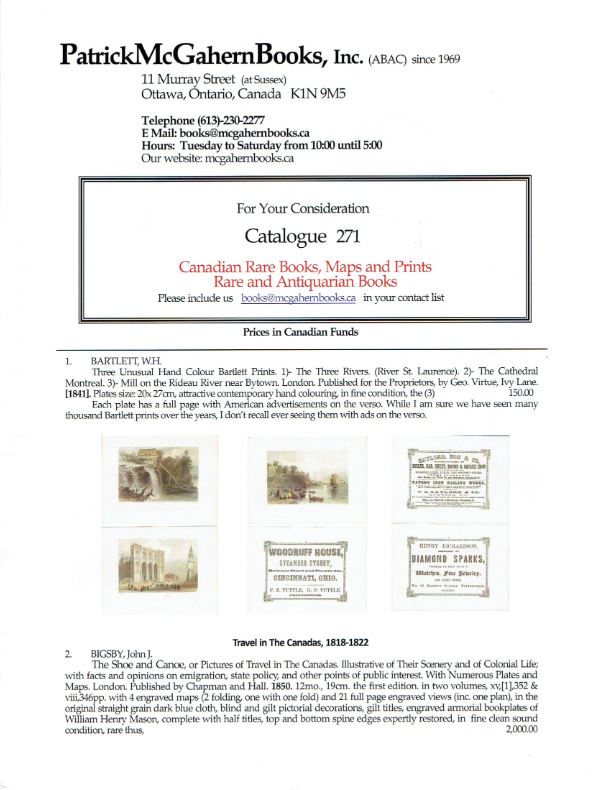 Patrick McGahern Books has released their Catalogue 271. Canadian Rare Books, Maps and Prints, Rare and Antiquarian Books. While Canadiana is McGahern's specialty, it should be noted that the Rare and Antiquarian Books section contains material with no connection to Canada. Travels into the interior of Africa are about as far from Canadiana as I can imagine, and a travel guide to Ireland, while physically closer, is still well outside the field. The majority of the items do still pertain to this northern land. Here are a few examples.

We will begin with an item that is of importance to both sides of the border, Canada and the United States, but comes from England. This is the official British printing of a Treaty Between Her Majesty and the United States of America, for the Settlement of the Oregon Boundary Signed in Washington, June 15, 1846. The nations had earlier resolved the border on the eastern half of the continent, but the border along the old Louisiana Territory remained in dispute. Britain claimed the Oregon Territory, today's Oregon, Washington, and Idaho, was theirs. America, chanting the "54 40 or fight" slogan, thought the border should be much farther north, encompassing much of today's British Columbia. Americans were prepared to fight for the land, but with President Polk more interested in grabbing land from Mexico, and unprepared to fight on two fronts, he decided to reach a compromise with the British. The British, in turn, recognizing the reality of American immigration into the territory as a result of the Oregon Trail, were also willing to settle the dispute. This is the treaty that set the border between the two countries in the Pacific Northwest. Item 11. Priced at CA $1,200 (Canadian dollars, or approximately $884 in U.S. funds).

Here is a title that describes the beginnings of another historic event, A Trip to Newfoundland; Its Scenery and Fisheries; with an Account of the Laying of the Submarine Cable, by John Mullaly, published in 1855. Leaving aside the scenery and fisheries, this is an account of a major event in communications. Mullaly was part of the team involved in laying a cable between Cape Breton, off the coast of Nova Scotia, and Newfoundland. Enabling people in Newfoundland to communicate with Cape Breton islanders was not the aim. This cable would allow communications to run all the way from Newfoundland to New York and beyond. But, not even that was the aim. The next step was to lay a cable under the Atlantic all the way from Newfoundland to Ireland, the first attempt to enable electronic communications from Europe to America. This first attempt to lay a cable 85 miles from Cape Breton to Newfoundland in 1854 was unsuccessful, not a good omen considering the distance ahead. However, there was no quitting and the cable was completed in 1856, and a cable to Ireland was successfully put down in 1858. It worked for three weeks and then failed. It was not until 1866 that a cable was successfully laid on the ocean floor that continued to function for years, enabling transatlantic communications to become a reality. Item 24 CA $600 (US $442).

Next we have a pair of handwritten lettergrams concerning another misfortune off the coast of Nova Scotia. The writers were Susanna Lawrence and her brother-in-law James Lawrence, who were sailing on the RMS Columbia from Halifax to Boston. They were written to their husband and brother, wealthy Bostonian Abbott Lawrence. On a foggy day, the Columbia ran into a rock ledge. The ship could not be saved, but miraculously, all 85 of the passengers and crew survived. Susanna Lawrence writes, "...little did I think as we distanced the wharf that all too soon the beautiful, finely built 'Columbia' would be a total wreck, and your father, mother & sister taken from her at the risk of their lives within two hours." Susanna's eight-page letter goes on to describe their stay in Halifax. The letter from Abbott's brother, James, who apparently went to Halifax to arrange their passage back to Boston, reassures, "Here we are rollicking about having a grand time. We have finished talking about shipwrecks, almost, and are enjoying dinner & parties as if we were residents of this magnificent city..." Rather than looking "forlorn & destitute," as shipwrecked people normally do, James assures that "all appear to be happy as possible." The Lawrence family was among the founders of the very successful textile industry of New England, the city of Lawrence, Massachusetts, named for them. The Columbia was one of the first ships of the Cunard Line, but despite this early setback, it went on to achieve great success as well. Item 13. CA $500 (US $368).

John J. Bigsby had an unusual combination of careers. He was a physician and geologist. He received his medical degree in Edinburgh and was sent by the British Army as a medical officer to Canada in 1818. He remained for eight years. After a typhus outbreak, he was sent to Upper Canada, along the western Great Lakes, to deal with the epidemic. Along the way, Bigsby developed a deep interest in geology. As a result, he was also commissioned to study the geology of the area. That would continue as he served on the boundary commission, which mapped out the national border along the Great Lakes to Lake of the Woods. Bigsby returned to England in 1826 where he continued his geological studies. In 1850, he wrote this book, which was not so much about geology or medicine as about his experiences in Canada and its customs and people. The title is The Shoe and Canoe, or Pictures of Travel in the Canadas. He describes the squalid condition of Indians living in the cities, elegant hearse sledges with chiming bells to mark a winter funeral, and numerous anecdotes from Quebec to Lake Superior. Item 2. CA $2,000 (US $1,470).

Here is one of those books with no connection to Canada. Item 47 is Proofs of Conspiracy against all the Religions and Governments of Europe, carried on in the Secret Meetings of Free Masons, Illuminati, and Reading Societies. Collected from Good Authorities by John Robison. A. M. Professor of Natural Philosophy and Secretary to the Royal Society of Edinburgh. I might have thought his "good authorities" included Alex Jones, but this was published in 1797. McGahern describes this as "a classic eighteenth century work of conspiracy theory: a diatribe accusing Freemasonry of being infiltrated by the Illuminati Order..." Robison was a Scottish physicist, showing that even physicists can be given to flights of fancy. Then again, maybe the Illuminati really are responsible for all of our troubles. Item 4 is a second, "corrected" edition, published the same year as the first. CA $900 (US $661).