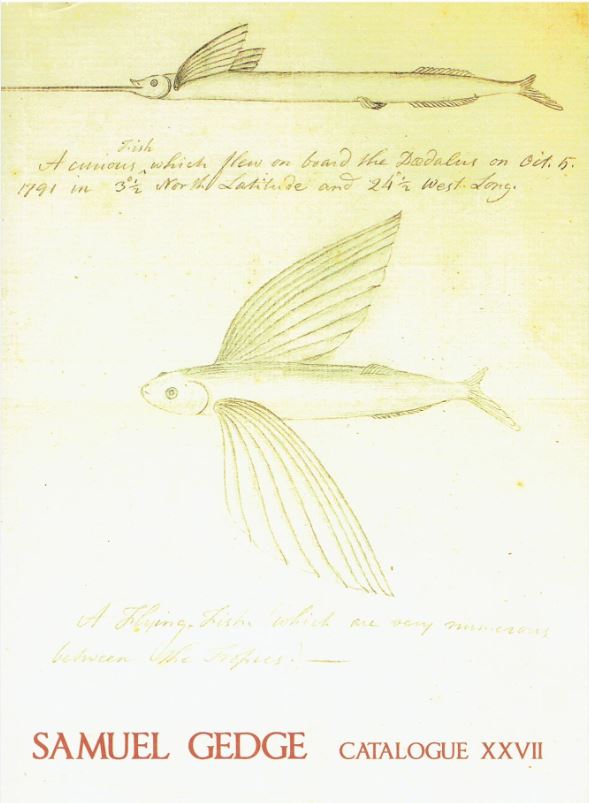 Samuel Gedge Ltd. has released their Catalogue XXVII. Using Roman numerals for their numbers makes sense, because what Gedge offers is old material, heavily concentrated in 17th to early 19th century. Much of what they have is ephemeral in nature, various documents and manuscripts from centuries ago. There are also numerous books, including a sizable number of first French (translated) editions of English novels from this time. These are a few of the items we found in this latest selection from Samuel Gedge.

We will begin with an item that is most likely to appeal to American collectors. It is a certificate printed on vellum recording the purchase of land in Virginia from the British crown. Naturally, this comes from colonial days, specifically 1764. The purchase was for 540 acres and came at the most reasonable price of 50 shillings. That's about $3 today. The purchaser was Richard Witton and the land was somewhere in Lunenburgh County. In the last few centuries, the "h" has been dropped from the county name. Perhaps someone can locate this parcel on the east or lower side of Blackston's Creek, wherever that may be. Beyond that, it will get hard to determine the boundaries, as they ran from "Fruittys Corner hiccory," to an oak tree, a couple more "hiccories," a pine and a dogwood. Using trees to determine lot lines is not a good long-term means of identification. The document was signed by Francis Fauquier, lieutenant governor of the colony. Item 72. Priced at £1,750 (British pounds, or approximately $2,192 is U.S. dollars).

Next we have a history of women, as presented by a man who lived two and one-half centuries ago. That might not be considered the most objective source today, but in fairness to author William Alexander, not many men in those days would have taken women seriously enough to write such a book. The title is The History of Women, from the Earliest Antiquity, to the Present Time; giving Some Account of Almost Every Interesting Particular Concerning that Sex, Among All Nations, Ancient and Modern. That certainly sounds thorough, it taking two volumes to present everything ever about women, though "to the present" then was only 1779. Alexander was a physician who drew on numerous sources for his book, from the bible, classical sources, medieval writings, and anthropological observations of customs in travel literature from Asia, Africa, and the Americas. Gedge notes that Alexander's work is considered "rambling and uneven," but was thought valuable by contemporary readers. Item 30. £950 (US $1,191).

This is a woman who undoubtedly would have made it into Alexander's history of women had she not come along too late. Item 54 is a handbill announcing, ..Just arrived in Liverpool, and now exhibiting at the Large Room, Friendship Tavern...the Celebrated Strong Woman, the Welch Female Hercules. Her name was Mrs. Laugharne, and one guesses Mr. Laugharne wasn't messing around with her too much. She had come to exhibit "a variety of her astonishing feats of strength and agility." Among her feats was to put 20 weights of 56 lbs. each, or 1,120 lbs total, on her body and "disengage" herself without assistance. She could also carry a hogshead of water, about 65 gallons, and an anvil of two hundred and a half (pounds?). The lady could also lift a chair with her teeth and throw it over her head 20 feet from her body. I'm sorry I missed that, but the performance was held in 1819. £450 (US $565).

Next we have a couple of drawings sketched by a crewman on George Vancouver's voyage to the Pacific from 1791-95. Vancouver visited Australia and Hawaii among other spots, but is particularly noted for his explorations along the Pacific coast of North America. These images were made early in the voyage, October 1791, when stopping at the Cape Verde Islands. The artist was William Gooch, the mission's astronomer, sailing on the Daedalus. One shows a "curious fish" which flew onto the Daedalus, another a typical flying fish,"which are very numerous between the tropics." The two fish are shown on the catalogue's cover. There are two other pencil drawings, of a man and a woman of St. Jago (Santiago). Gooch never made it home, nor even very far into the mission. On May 11, 1792, he and some other men went ashore on Hawaii. They were attacked by natives, with three men, including Gooch and the commander of the Daedalus, being killed. An ink note on the back of the sketches circa 1800 explains that they were given by Mr. W. Gooch (William Gooch's father) to Miss Smithson of Cambridge, afterwards Mrs. Francis Howe. Miss Smithson was a friend of Gooch with whom he corresponded during the voyage. Item 43. £2,250 (US $2,827).

Item 111 consists of a pair of certificates testifying that a couple of recently deceased persons were buried in wool. One is for Anne Reeve, a "traveler" in the county of Bucks, who died in 1682. The other was for Thomas Carter, who also died in the county of Bucks, in 1686. The certificates state that the deceased "was not wrapt or wound up in any shirt shift sheet or shroud or any other materiall but sheeps wool only." This was not an attempt to establish that the dead were buried in something fine, not polyester or whatever was the equivalent of its day. These attestations were required by the Burial in Woolen Acts of the late 17th century. These were not passed to protect the dead from inferior burials. They were enacted to protect Britain's wool industry from foreign cloth. £950 (US $1,191).

Speaking of the dead, item 8 is An inventorie taken of the goods of James Parker gent purser off his Ma[jes]ties shipp called the Dreadnought late dec[eas]ed. Parker was a sailor who died in 1646. This is an accounting of his possessions, evidently for the benefit of his heirs. Parker owned some furniture and bedding, "a pewter chamber pott," books, "phisicall druggs," table glasses, a bible, pistol and case, a cloth coat with velvet, and "an old beaver hatt," among his possessions. He was also owed 50 shillings in pay, with which his heirs could have purchased 540 acres in Virginia. £1,250 (US $1,570).