The 17th Century from the William Reese Co. 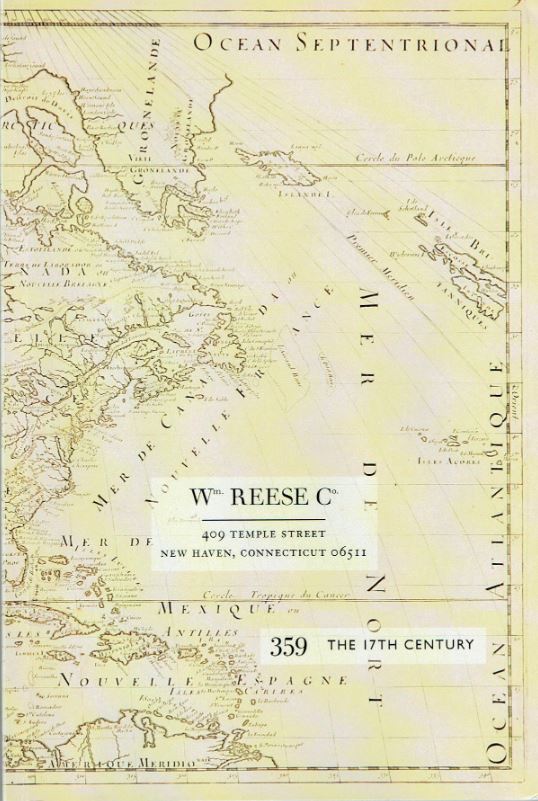 The 17th Century from the William Reese Co.

The William Reese Company has published a catalogue devoted to The 17th Century. This century comes in the middle of the age of exploration and discovery, and in the Americas, settlement. Reese's main specialty is Americana, and we find much here pertaining to North America. However, it's parameters are not so limited, so we find items focused on Europe or other areas of the world outside of the Western Hemisphere. There was much happening in the century that began twenty years prior to the pilgrims landing in Plymouth and ended with settlements and colonies all along the Atlantic side of the North American continent. Here are a few of the fascinating items we found in this catalogue of 17th century material.

We begin with a book published early in the 17th century, though much of it concerns earlier days. It sort of set the table for what would be happening through the rest of the century. Item 93 is Hakluytus Postumus or Purchas His Pilgrimes, by Samuel Purchas, five volumes published 1625-1626. This is a massive collection of accounts of explorations up to Purchas' time, 1,200 of them. It is in effect a continuation of the earlier collection produced by Richard Hakluyt in the late 16th century. Purchas' collection was more extensive, including more recent voyages and others not included by his predecessor. Purchas also had access to uncompleted manuscripts of Hakluyt in his possession when the latter died in 1616. Purchas began his work in 1611, and published shorter compilations along the way, but this is his complete collection of all the voyages he covered. Along with those of notable English explorers such as Drake, he includes those from other lands, notably the Spanish and Portuguese pioneers such as Columbus, Magellan, Da Gama, and Cortes. He adds to that accounts from China and Japan from the early Jesuit missionaries. There is much in the way of American explorations in the collection, and Purchas has also included some of the most important early American maps. Among them is John Smith's map of Virginia, and the Briggs map which first named the Hudson River, Hudson Bay, and New Mexico, and the first to display (inaccurately) California as an island. Priced at $135,000.

In the early 17th century, William Usselincx was promoting Dutch involvement in the New World. The Spanish already had extensive ties, Portugal had Brazil, and England and France were seeking a piece of the action. Item 131 is Usselincx's Vertoogh, Hoe Nootwendich... published in 1608. This rare pamphlet calls for the creation of a Dutch West India company. He argues that this would curb Spanish power while enriching the Dutch. He argues for such settlement on the basis of natural products available from the Americas, rather than gold and silver. This pamphlet helped lead to the creation of the Dutch West India Co. in 1621 and the settlement in New Amsterdam (New York), but the Dutch never had much success in the West Indies, their major colonization being in the East Indies instead. $2,500.

The Dutch presence in North America would come to an end 50 years after it started. The Dutch would colonize the area along the Hudson River, most notably the mouth of the river, New Amsterdam. However, they would end up at war with the English and surrender that territory by treaty in 1667. The English renamed the settlement "New York." Item 71 is Description Exacte de tout ce qui s'est Passé dans les Guerres... published in 1668. It is a contemporary account of the Anglo-Dutch war of 1664-1667 and the Treaty of Breda that brought the war, and Dutch settlement of North America, to an end. This French edition followed the Dutch edition of 1667, the first published account of the surrender of New York. $1,500.

Where are the happiest people in the world to be found? Walter Hamond had the answer back in 1640. Item 46 is his book, A Paradox. Prooving, that the Inhabitants of the Isle Called Madagascar...are the Happiest People in the World. Hamond may have had some ulterior motives in turning Madagascar into a Utopia. He felt it would be an ideal location for English traders to India and the Far East to rest and repair their ships. So, while at first describing the natives as "a sluggish and slothfull people," he goes on to depict them as an innocent, guileless people, happy in their lives without need for gold or money or such other desires that corrupt people. $12,500.

Henry Vane was elected Governor of Massachusetts in 1636 at the age of 23. He stayed only a year before returning to England. He should have stayed longer. He is remembered in America for religious tolerance and procuring the charter for Rhode Island. On his return to England, he became involved in Parliament, including the time of Cromwell and the Interregnum. That did not sit well after the Restoration, but Vane had opposed the execution of King Charles I and was granted clemency by Charles II. Unfortunately, not all of his views going forward were well-received, and in 1662, Parliament had him tried for treason, a trial that was anything but fair. Meanwhile, Charles II retracted his offer of clemency, and Vane was beheaded in 1662. Item 132 is The Tryal of Sir Henry Vane...Together with what He Intended to have Spoken the Day of His Sentence. Vane wished to state his position on the scaffold, but his attempts to speak were silenced or drowned out. Realizing this might happen, Vane had passed on a copy of his planed speech to friends who published it after his execution. $3,750.

Item 2 is a Dutch engraving, Kleedinge van Canada, an image of a Canadian Indian family, father, mother and baby. It was published in the 17th century, sometime after 1664. The Indians look a bit idealized, but something particularly stands out about this image of Canadian Indians. In the background is a palm tree. Perhaps they were off for a Caribbean vacation at the time. $850.