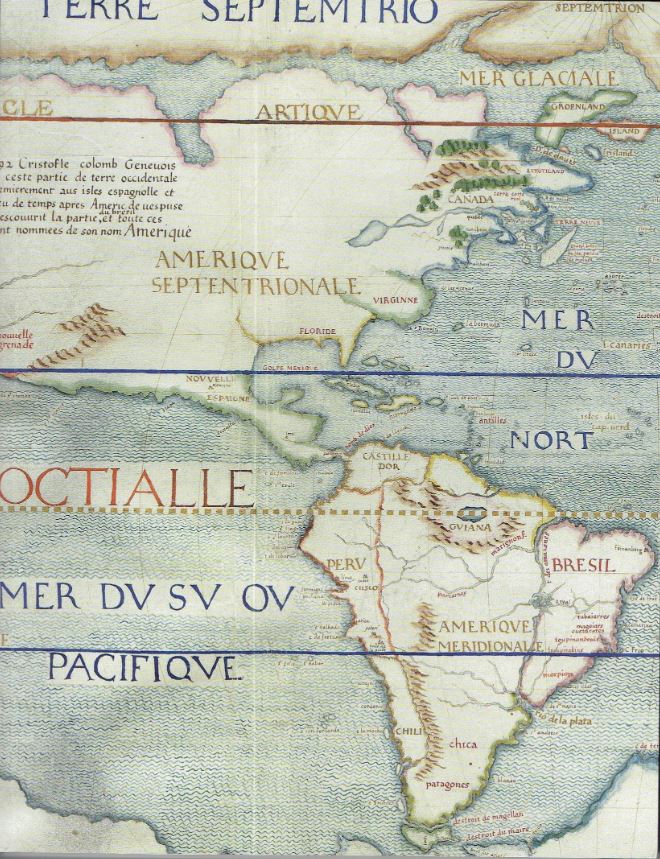 Daniel Crouch Rare Books, the specialist in maps, atlases, plans, sea charts, and voyages, has created a catalogue entitled X Marks the Spot. This is a spectacular catalogue, 188 pages of detailed descriptions, explanations, and illustrations covering 50 items. They are important in their field, which takes you to the subject at hand. This is a catalogue about pirates and piracy, privateers, buccaneers and the like. It is a field that has fascinated readers for centuries, the excitement, danger, and daring. Never mind the fact that these weren't the nicest people to ever walk the earth. To this day, pirates can fill the seats of movie theaters, even though the real ones have been gone for centuries. Here are a few titles from this exciting collection of books and maps from Daniel Crouch Rare Books.

The best place to begin the story of piracy is with Alexandre Exquemelin. He was the man who started the great fascination with pirates that lives to this day. He wrote the only reasonably accurate tale of pirates in the 17th century because he was one, though not one of the leaders. He was actually a French indentured servant, sent to the Caribbean to learn the trade of a barber-surgeon. In those days, the two skills were combined, both requiring cutting, and neither having notable standards that guaranteed they could cut hair well, let alone perform surgery. When Exquemelin reached the end of his servitude, he decided to try his hand at something else - pirating. He hooked on with one of the best, Henry Morgan. Morgan was technically a privateer, plying his trade against Spanish vessels and property with the assent of the British crown. He ended up a knight. Exquemelin spent five years with Morgan, some time in the Dutch Navy, and then returned to Amsterdam where he wrote and first published his book in 1678. It was a bestseller for its time, being republished many times in several languages. He helped to build Morgan's reputation. Item 14 is the second English edition, published in 1684. The title is Bucaniers of America; or, a true account of the most remarkable assaults committed of the late years upon the coasts of the West-Indies, by the Bucaniers of Jamaica and Tortuga, both English and French. This edition includes Basil Ringrose's account of his time with another pirate, Capt. Bartholomew Sharp. Exquemelin later returned to his first trade, barber-surgeon, on a ship headed to America and disappeared from history. Priced at £17,500 (British pounds, or approximately $22,311 in U.S. dollars).

The British frequently made use of pirates/privateers in their battles against rivals, particularly the Spanish, as their ships were often loaded with gold and other treasures from the Americas. Nevertheless, they did not believe turnabout was fair play. The pirates who attacked them were not so much their European rivals but the notorious Barbary Pirates, prowling the waters of the Mediterranean. Item 6 is a letter written by Oliver Cromwell, in his role as Lord Protector in 1657, to Grand Vizier Azam for the Ottoman Sultan. Cromwell writes to "complaine of an Act of violence and injustice toward divers Merchants of this Commonwealth interested in an English ship called the Resolution...in a peaceable course of Trading, was notwithstanding assaulted by seven Tripoly men of warre..." British merchants had increased trade with Northern Africa and the Levant at this time as many European ports had been closed to them in protest of the execution of Charles I. However, this required running the gauntlet of the Barbary Coast. Cromwell succeeded in getting some sailors released and a modest peace, but the Barbary Pirates continued to wreak havoc on shipping into the 19th century. £20,000 (US $25,500).

These men weren't exactly pirates, but they also committed high crimes on the seas. They were the most famous mutineers of all, those who overthrew Capt. Bligh from his command of the Bounty. They sneaked into the Captain's quarters in the middle of the night, tied him up, and seized the ship. Once in control, they put Bligh and all of his followers it could hold, in a longboat and sent them off to meet their fate. As it turned out, their fate was to make a 3,500-mile journey, an amazing feat by Bligh, to rescue in Batavia. Once he returned to England and told his story, the British sent a ship out to find the mutineers and bring them home. However, most had sailed to parts unknown. They were only able to find ten men, whom they put on trial. Item 44 is Minutes of the Proceedings of the Court Martial Held at Portsmouth, August 12, 1792 on Ten Persons Charged with Mutiny on Board His Majesty's Ship the Bounty. Four were acquitted as Bligh notified the court that they had actually remained loyal to him, but had to stay with the Bounty as there was not enough room for them on Bligh's small boat. The other six were all convicted and sentenced to death, but two were later pardoned and another acquitted because certain evidence was not admitted at the time of trial. Only three of the mutineers were ever hanged. £32,500 (US $41,437).

In the 17th century, English law required that pirates be tried in England for their crimes. When piracy was limited, that worked satisfactorily, but as piracy grew, it became impractical. Starting in 1700, Parliament adopted a seven-year rule which was renewed allowing for trials in the colonies. Finally, in 1720, Attorney-General Richard West prepared this (manuscript) document, to make such trials in the colonies permanent. It also extended punishment to those who aided and abetted piracy. The issue was that transporting accused pirates in the East and West Indies all the way back to London for trial was costly and difficult, encouraging them to engage in piracy, realizing the likelihood of punishment was small. Swift justice was made possible and permanent through the legislation resulting from this document. This manuscript was once part of the massive collection of Sir Thomas Phillips. Item 27. £11,000 (US $14,025).

Item 4 is a spectacular, one-of-a-kind color manuscript map prepared by Jean de Caus in 1624. De Caus was an architect, engineer, author, and later in life, a mapmaker. It is believed to have been prepared specifically for Cardinal Richelieu, effective ruler of France during the reign of Louis XIII and, according to Kissinger, "father of the modern state system." De Caus worked for the King as a hydraulic engineer, and another of his maps is dedicated to Richelieu, forming the connection with this cartographic masterpiece and Richelieu. The Cardinal was determined to build a powerful navy for France, pirates being one issue, though national rivalries, notably with England, was the major factor. The need for a world map in this situation is obvious. Crouch notes that the Cardinal had a particular interest French territory in Canada, and while much of de Caus' map is based on earlier ones, it includes some more recent discoveries by Champlain. Nevertheless, North America is the least developed part of the map as little was known of the continent at this time beyond the coasts of the Atlantic and Gulf of Mexico. The map does go far enough inland to show three of the Great Lakes, though they are not very accurately portrayed. £500,000 ($637,565).