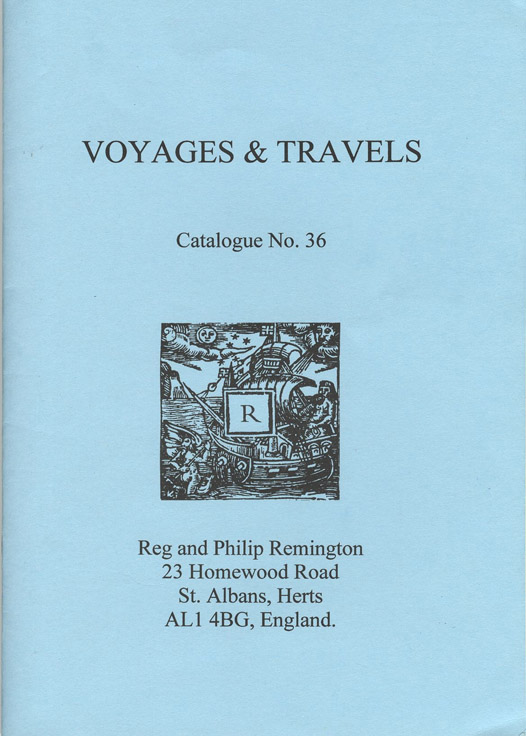 This month we review our first catalogue from English booksellers Reg and Philip Remington. The Remingtons are a father and son team with over eight decades experience in the book trade. Reg Remington has been in the business for over half a century, spending most of his first three decades with the legendary original Francis Edwards Ltd. When the Edwards family, after well over a century in business, chose to sell in 1979, Reg Remington decided to open his own firm, which he accomplished as a partnership with his son Philip Remington. Philip Remington now counts over 30 years experience in the trade himself.

At the time Edwards was sold, Reg Remington was responsible for the voyage and travel department. This remains the area where he and Philip specialize today. Their latest catalogue is their 36th, and it is, not surprisingly, headed Voyages and Travels. It offers a remarkable collection. There is everything here from a complete first edition set of Cook's travels to the personal ramblings of some adventurous tourists out to see the world.

The Remingtons have made it easy to find the material which interests you by sorting it geographically. Among the many locations covered are Africa (actually six subsections of Africa), China, the U.S.A., Canada, Australia, Egypt, Mexico, the East and West Indies, and general voyages, which covers those trips that went to too many places to pinpoint any one. Then there are special topics, such as Captain Bligh, rubber (that's an odd one), and my favorite - pirates. While Remington is an English bookseller, there is no such limitation on the nationality of the explorers covered. The closest thing to a local bend here is that the majority of the books are in the English language, though often these are translations of works from explorers of different nationalities. All in all, this is a most interesting and diverse collection of books concerning voyages and travel. Here are a few examples.

Item 10 is an account of a relatively obscure six-year voyage primarily along the west coast of America. The book is the Narrative of the Voyage of H.M.S. Herald, 1845-1851, under the Command of Captain Henry Kellett...being a Circumnavigation of the Globe, and Three Cruises to the Bering Strait and Arctic Regions in Search of Sir John Franklin. The book was written by the ship's naturalist, Berthold Seeman. The expedition searched the west coast of South, Central and North America as well as the Hawaiian and Galapagos Islands for three years when it was redirected north to join the search for Sir John Franklin's ships. The Franklin expedition became trapped in the frozen north searching for a northwest passage, and neither the Herald nor many others sent to find it were successful. Nevertheless, the search made for some spectacular adventures. Herald Island, located north of the Bering Strait, and part of Russia, was discovered by the Herald's voyage. Priced at £2,500 (US equivalent of $4,351).