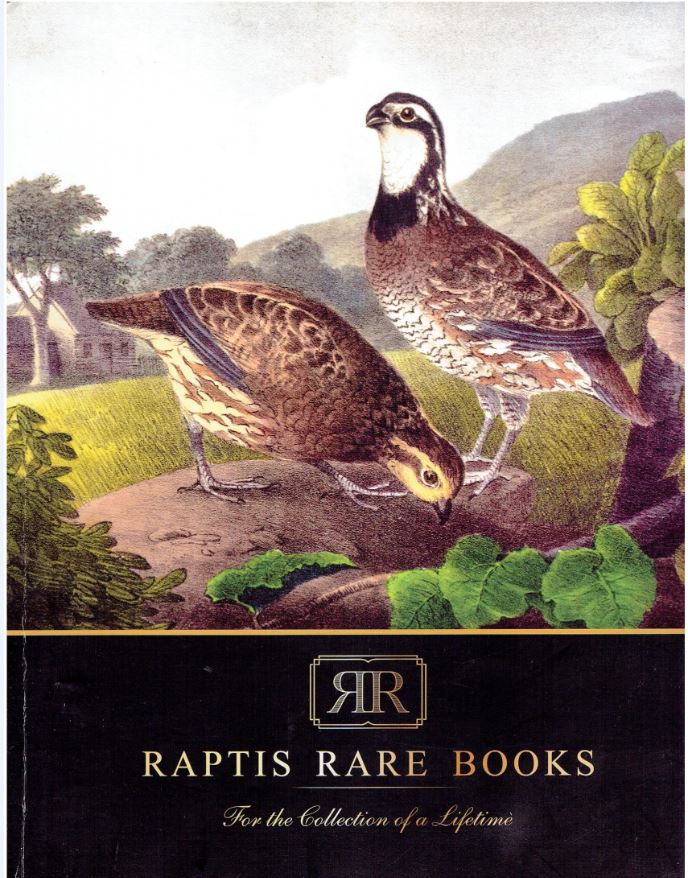 Raptis Rare Books has issued a new catalogue of important books and ephemeral material. Raptis divides their catalogues into sections which show what sort of items you can expect to find. These are the sections for this latest catalogue: Americana; Philosophy & Religion; History & World Leaders; Literature; Art, Illustration & Photography; Children's Literature; Sports & Leisure; Travel & Exploration; and Economic & Social History. Here are a few selections.

We begin, illogically, with an ending, John Steinbeck's last book. It is his look at America and Americans, published in 1966. This is not a typical Steinbeck book in that it features photographs. There are 136 pages of them by prominent photographers of the time, including Ansel Adams. Raptis describes the combination of the Nobel Prize winning author's words and the photographers' images as "a spectacular portrait of America with its vital array of scenic beauty and human variousness." This was issued during troubled, divisive times, so perhaps it can be a reminder in these troubled and divisive times that there is a way out. This copy has been inscribed by one great writer to another. The recipient was John Updike, the inscription reading, "For John Updike with admiration John Steinbeck." Item 55056. Priced at $20,000.

This next item contains an amazing collection of autographs, undoubtedly the greatest such collection of American political leaders' signatures from the Civil War era. It is a bound album in full morocco, with gilt titles and edges and marbled endpapers. The first page contains the most important signature of all from the time, "Yours truly A. Lincoln." That is followed by the autographs of members of Lincoln's cabinet, including William Seward, Salmon Chase, and Edwin Stanton. And then come another 225 signatures from senators, representatives, and delegates to the 37th congress, which ran from 1861-1863. These signatures were collected during the years 1862-1863 by James McCain, a young patent officer working for the U. S. Patent Office. In gilt on the title page is the name of Lizzie F. Harlow. She was McCain's favorite young lady, but they never married. Nevertheless, she kept the album and passed it down to her heirs. Item 91488. $25,000.

Mexico hasn't had many emperors. Only one comes to mind, and he was not a native. This pamphlet is a first edition of the provisional laws of Mexico set down by Emperor Ferdinand Maximilian I, Estatuto Provisional del Imperio Mexicana. French Emperor Napoleon III thought it would be useful to take over Mexico, and in 1861, he saw his opportunity. Normally, the United States would not have tolerated such a blatant violation of the Monroe Doctrine. However, in 1861, the United States was distracted by other concerns, such as its southern states revolting against the federal government. France put Maximilian on the Mexican throne, and while the new emperor was not such a bad guy, he was not selected by the people of Mexico, who only a few decades earlier had thrown off centuries of European colonial rule by Spain. They did the same to Maximilian and France. While France survived the revolution, Maximilian did not. Despite many international pleas for mercy, the new government executed him. Item 89060. $2,800.

Next is one of the more important works in the history of Christian thought. This is the first edition in English of St. Augustine's Of the Citie of God, published in 1610. It was written much earlier, in the early years of the fifth century. Augustine had witnessed the fall of Rome and many blamed the Christians for the calamity. He set out to refute the claim, which he does by saying paganism contained the seeds of its own destruction. However, Augustine's work turned out to be much greater is scope. In it, he depicts the contrast between good and bad. One city is inhabited by pagans, people self-centered and unconcerned with God. The other is a moral, God-centered city, and unlike its evil counterpart, is worthy of salvation. Item 90455. $13,000.

This is a brief note, not very important in itself, but it provides a connection between the two great names in the history of evolutionary theory. The note comes from the man whose name everyone recognizes, one who still elicits controversy among many religious fundamentalists, Charles Darwin. Writes Darwin, "Can you tell me Mr. Fr. Geach's address? I want to send him my book." The recipient is Alfred Russel Wallace, sort of a co-founder of evolutionary theory. Wallace did not work with Darwin on the discovery, but rather, came to almost the same conclusions independent of Darwin. While Darwin reached his conclusions studying species in South America, and noting differences in similar species on the mainland versus offshore islands, Wallace did the same studying species in different locations of the Malay Archipelago. Neither was aware of the other's discoveries. Darwin had already been working on his theory for many years, but was nervous of the controversy revealing it would create, when Wallace, as a fellow natural scientist, asked him to look at his conclusions. Darwin realized he would have to reveal his determinations now before they became yesterday's news. As it turned out, perhaps surprisingly considering the type of professional jealously often seen, Wallace welcomed Darwin's views and was most deferential to his more experienced colleague. The two revealed their theory in a joint paper a year before Darwin published On the Origin of Species, and Wallace would provide his support for Darwin's theories in the years going forward. Item 90590. $20,000.