A Miscellany from Jonathan A. Hill Bookseller 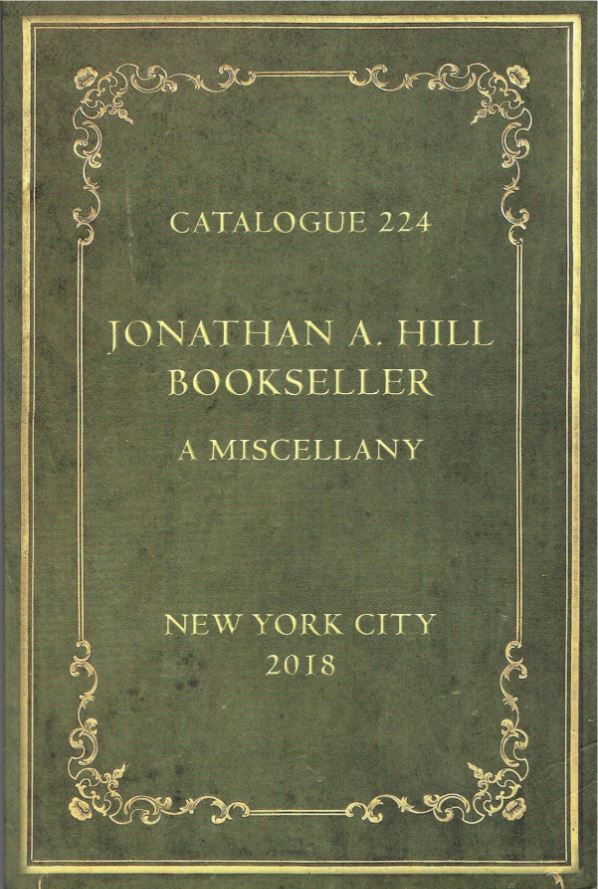 A Miscellany from Jonathan A. Hill Bookseller

The latest from Jonathan A. Hill Bookseller is Catalogue 224 A Miscellany. You may find many different things in a miscellany, but don't look for anything new. There are just degrees of antiquarian books here. Most are European, with a great many books in French. Another type of book you will find throughout this selection is auction catalogues, along with some catalogues of private libraries. The auction catalogues are also quite old, mostly from the 18th to the early 19th century. There were some fantastic private collections then, the type that would be almost impossible to duplicate today, not just because of the cost but the fact that so many of these books are now in institutional libraries. These are some of the items offered in this selection.

Tennis anyone? Here is the first book to describe how the game is played. The title is Trattato del Giuoco della Palla di messer Antonio Scaino da Salo (Treatise on the Ball Game by Mr. Antonio Scaino of Salo). Antonio Scaino was an Italian priest who wrote this book in 1555 to resolve disputes in the rules of games. It covers five games, including a precursor of soccer, but it most thoroughly describes the rules of an early version of tennis. Much remains the same. The game was already popular among nobility by this time, but played in a variety of forms with different rules. Scaino not only describes the sport, but sets down a common set of rules. He establishes the proper size of the court, proper scoring (15-30-45), and uses predecessors of terms still used today - "vantaggio" (advantage) and "a due" (deuce). He also establishes the deuce in scoring, the need to win by at least two points as he felt one point insufficient to show clear superiority. Item 84. Priced at $45,000.

Here is another first. It is a first edition of the first practical bibliography written. Its title is Liber de Scriptoribus Ecclesiasticis. Despite its title, it is not limited to ecclesiastical books, though they do form the great majority. The author of this 1494 book was Johannes Trithemius. Trithemius (or Tritheim) was a polymath, but professionally, he was an abbot at the monastery of Sponheim. When he arrived, it had 48 books in its library. He expanded that number to 2,000. In the process, he began organizing and cataloging the collection. Trithemius received many inquiries concerning books as a result of his great knowledge, which led him to the idea of creating a bibliography of ecclesiastical writers. He began work on this book in 1487, as he set out in alphabetical order a list of nearly a thousand writers, eventually recording almost 7,000 books. Being a polymath, Trithemius wrote on a variety of topics, including one book that made it to the Church's banned book list. It covers magic and the occult, topics which fascinated Trithemius but not the Catholic Church. Item 96. $75,000.

We mentioned that there are many personal library and auction catalogues in this collection. Here are several which allow us to follow one such collection through its building to its piecemeal dispersion. Claude Gros de Boze was an 18th century French scholar and numismatist, an expert on medals. He was in charge of the King's collection of medals and was elected to the French Academy. De Boze was also a book collector, and developed one of the finest collections of his time. It featured such items as a Gutenberg Bible and a Mainz Psalter of 1457. Item 17 is the Catalogue des Livres du Cabinet de M. De Boze, a catalogue of de Boze's library, published in 1745. It is a beautiful catalogue, printed by the King's Printer. It was printed in a limited edition for friends. Hill has found various estimates by bibliographers for the print run, all short - 12, 25, 36, and 50. This copy contains a portrait of de Boze, a mystery since Hill has found no other copies with it. It may have been added by his nephew as a tribute to his uncle. $45,000.

Next up we have an edition of the above title published in 1753. That was the year de Boze died, this issue being published posthumously. It was prepared for the en bloc sale of his collection by auctioneer Gabriel Martin. The over 2,700 item collection was sold to two collectors, Jules Francois de Cotte and Charles Robert Boutin, ahead of the planned auction. The two kept the books they wanted and sold off about half of the remainder for almost what they paid for them all to Louis-Jean Gaignat. No need to feel sorry for Gaignat for paying too much. He sold them to another collector for a healthy profit. Item 18. $2,500.

Next we have the Catalogue des Livres provenans de la Bibliothéque de feu M. de Boze... published in 1754. This sale was put on by Gabriel Martin and consisted of the remainder of the de Boze collection Cotte and Boudin retained from the sale to Gaignat but did not wish to keep for themselves. Among this group was de Boze's Gutenberg Bible. Item 19. $1,250.

Now for one more piece to the de Boze dispersal. It comes from many years later - 1804. This is the auction Catalogue des Livres rares et précieux, et des Manuscrits, composant la Bibliotheque de M. Jules Francois de Cotte. This sale included the books de Cotte had retained from the de Boze collection along with others he owned. De Cotte obviously chose to sell off his collection while still living as he died in 1811. Item 32. $3,500.