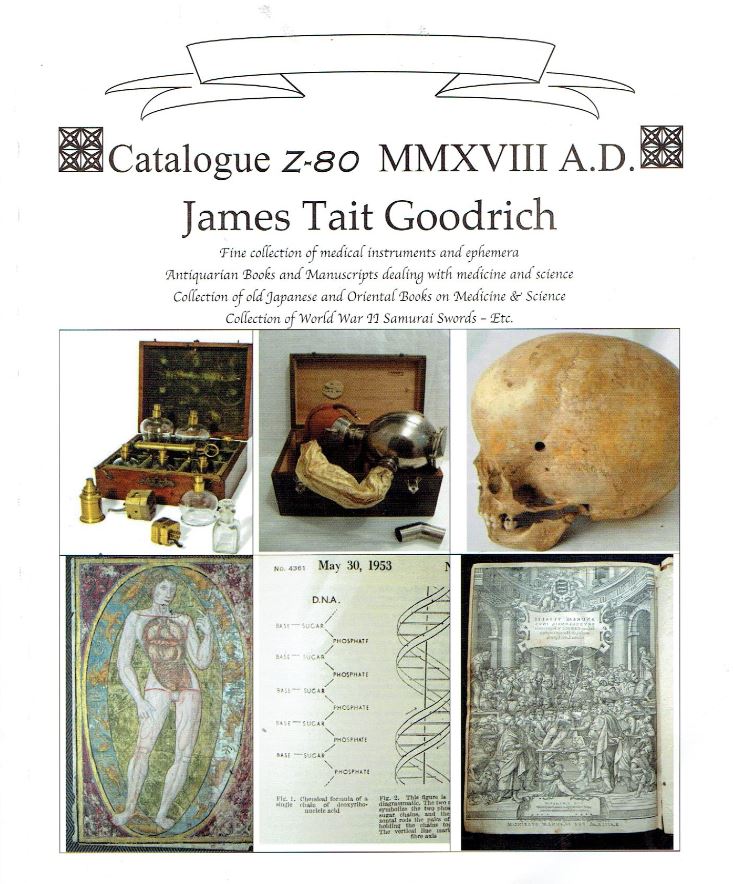 James Tait Goodrich Antiquarian Books and Manuscripts has issued Catalogue Z-80 MMXVIII A.D. The subtitle provides more specificity: History of Medicine and Science, Pre-Columbian Artifacts, Medical Instruments and Antiques, Japanese and Oriental Books and Samurai Swords. The great majority of items are medical related, including some ancient artifacts and Japanese material, but not all. Samurai swords might be a stretch to call medical unless being used for a quick amputation. Since there is little of recent vintage here, you would be well advised not to follow the medical advice and teaching to the T, but they will show you how medical science evolved to where we are today. Here are a few samples from this catalogue.

We begin with a work that was definitely ahead of its time. The title is Tractatio Med. Curiosa, de Ortu & Occasu Transfusionis Sanguinis. The author was Georg Abraham Mercklin, the publication date 1679. It is a treatise on transfusions, a practice not successfully introduced until the 19th century. At this early date, experimenting was not limited to human to human but animal to human as well. We know how that worked out. Indeed, Mercklin expresses grave reservations on the efficacy of the procedure. As we now know, matching blood type is essential for successful transfusions, but it wouldn't be until almost two centuries later that these differences were understood. The success of a transfusion versus a bad reaction would have seemed random. The frontispiece displays three images of transfusions, two from humans, one from a sheep. The practice ended up being outlawed in some places, and otherwise shunted aside for over a century before again being seriously considered. This copy of Mercklin's work is bound with De aequilibrio mentis & corporis commentatio by Johann Melchois Verdries (1726), a German professor of physics and medicine. Item 184. Priced at $2,500.

Certainly one of the most important developments in medicine, even if it didn't actually heal anyone, was the invention of anesthesia. Surgery without it seems unimaginable today. Ether was first used in 1846, and a year later, James Young Simpson came back with this improvement. He found chloroform to be less irritating than ether. Item 255 is Simpson's Account of a new anaesthetic agent as a substitute for sulphuric ether in surgery and midwifery. He first applied it to a woman who had a history of difficult childbirth. However, despite its obvious benefits, Simpson encountered opposition to its use from conservative clergymen and physicians. They felt it ran counter to their biblical belief that labor pains were God's ordained punishment for Eve's sins, and ran a campaign to convince others to oppose this practice. Simpson had to turn to the non-scientific argument that God had put Adam to sleep while performing rib surgery upon him to create Eve. He was the first anesthetist. The objections diminished after Queen Victoria used chloroform to give birth in 1853. My best guess is that the righteous clergy and physicians who opposed anesthesia during childbirth were all men. Item 255. $5,500.

Here is another message for obstetricians that seems as obvious today as the one before, but also was rejected by many of I. P. Semmelweis' contemporaries. The title is Offener Brief an sammtliche Professoren der Geburtshilfe (open letter to all professors of obstetrics), published in 1862. Semmelweis' request was small. Wash your hands. He used chlorinated lime as a disinfectant when cleaning his hands, and he herein passionately urges other obstetricians to take similar steps. For the most part, they ignored his silly idea. Item 252. $2,950.

Item 147 is a handwritten medical consultation from three physicians who attended Victor Hugo on May 20, 1885. The handwriting is that of Germain Sée, while Sée, Emile Allix, and Alfred Vulpian have signed it. It reads (in French), "The night was rather agitated and disturbed by two bouts of oppression. This morning there is a sign of pulmonary congestion on the right side." Hugo was 83 years old by then and there wasn't much the doctors could do for him. He died two days later. Hugo was the great French writer known for such novels as Notre-Dame de Paris and Les Misérables. The letter is accompanied by a carte de visite photo of Hugo. $1,250.

That is nothing if you collect signatures of 19th century French physicians. Item 39 is a document from the Académie Royale de Médicine, dated 1846. It contains the names of 123 French physicians, all members of the Académie, along with their signatures. Goodrich has identified 30 of them and has biographies available on them. Item 39. $3,250.

Next is an item that feels distressingly applicable to our times. The title is Punch-Drunk Syndrome. The chronic trauma of encephalopathy of boxers. This book by Macdonald Critchley was published in 1949. At that time, boxing was more popular than it is today, and many boxers ended up "punch drunk," not performing mentally quite as they had before. While boxing no longer makes headlines very often for its adverse effects, the subject in recent years has become a major issue of debate with football players. They too suffer from the trauma of repeated blows to the head and often end up diminished as a result. This item is still timely. Item 74. $395.