A Wide Variety of Material from Riverrun Books 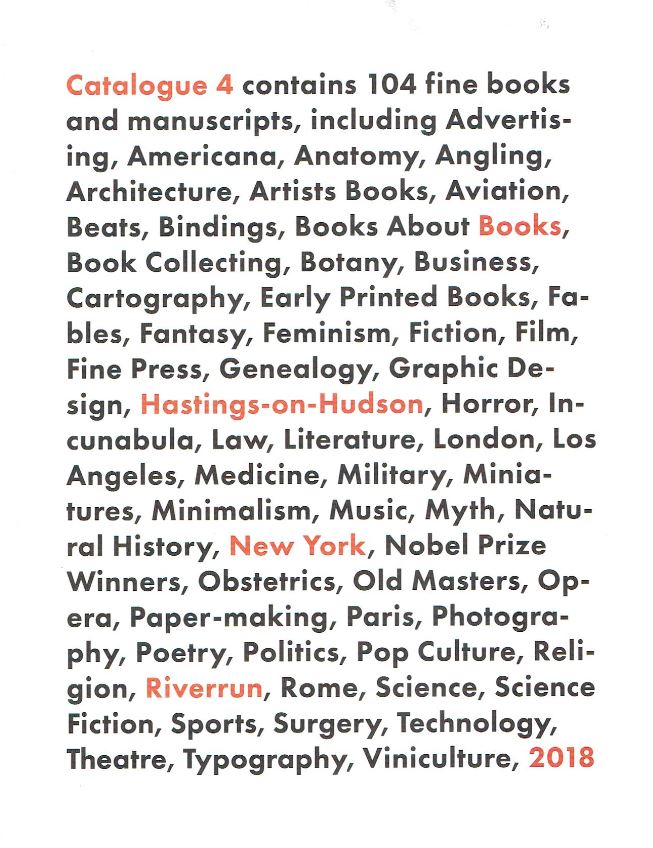 A Wide Variety of Material from Riverrun Books

Riverrun Books & Manuscripts recently published their Catalogue 4. What sort of material does it contain? The list is too long to write. So, we will let Riverrun tell us what is inside. Just click on the image of the catalogue to the left. That way the cover will be displayed large enough to read what is on it. It is a list of the numerous subjects covered herein. It's as wide as a river. Now, with that explained, we can proceed to some examples of just a few of those subjects included.

We begin with a man who was well ahead of his time when it came to advocating for women's rights, especially impressive since most men have perennially been behind their times in this area. Item 2 is A Treatise of the Nobilitie and Excellencye of Woman Kynde, Translated out of Latine into Englysshe by David Clapham. The author was Heinrich Cornelius Agrippa, the publication date 1542. Agrippa was a controversial person in his day. He dabbled in the occult, which led some to believe he was a sorcerer. He wrote his treatise in 1509, but did not publish it in Latin until 1529, and the English edition came out after he died. Some have questioned his sincerity, since he argued not only the equality of women, but their superiority. Those who questioned him undoubtedly were men. He makes his case with arguments that anticipated the women's movement centuries later. Agrippa writes, "[God] hath given but one similitude and lykeness of the sowle both male and female, between whose sowles there is noo maner dyfference of kind. The woman hathe that same mynd that a man hath, that same reason and speche, she goeth to the same end of blyssfulness, where shall be noo exception of kynde." He recounts how women were highly respected in biblical times and antiquity, but have had their roles diminished through denial of education and other opportunities by men. Item 2. Priced at $80,000.

The next writer's name is known because he had a disease named after him. Such are the rewards of medical discovery. Thomas Hodgkin was the first to understand and describe Hodgkin's Disease, a form of lymphoma. Others had been aware of some of the symptoms, but did not realize they were the result of a separate disease, not symptoms of another condition. Hodgkin described his findings in a lecture before the Medical and Chirurgical Society in 1832, and published them a short time later in their journal, Medico-Chirurgical Transactions. The title of his article is On Some Morbid Appearances of the Absorbant Glands and Spleen. Item 45. $8,000.

Item 68 is Album of the Assembly. New York. 1866 (spine title). This is an album of 143 photographs. It includes large photographs of Governor Reuben E. Fenton, the Lieutenant Governor and Assembly Speaker, smaller pictures of various state and assembly officials and employees, and all of the assemblymen. They are sort of distinguished looking, typical Civil War-era portraits of men (they were men). Perhaps they weren't all as respectable as they looked. The inscription is most interesting. It was presented to Benjamin Wood, a New York City newspaper publisher and southern sympathizer during the war who was arrested for sending coded messages to the South in his newspaper. His brother was the notorious Copperhead mayor of New York, Fernando Wood. Nonetheless, Benjamin managed to get elected to the New York Senate shortly after the war. The inscriber was George M. Curtis, most likely George Martin Curtis who is pictured among the assemblymen in this album. Curtis writes, "To Hon. Ben. Wood with compliments of quite an old friend this in part 'Rogue's Gallery' is given. It will remind him of some men at least who should be doing service at Sing Sing and not at Albany. Nov. 20. 1867." Sing Sing is a maximum security prison in New York housing some of its most notorious criminals. $1,500.

Here is another "Rogues' Gallery" of New Yorkers, a good complement to the last item. It is entitled Defenders and Offenders, published in 1888. It contains mug shots of 210 defenders and offenders. Ten are of defenders, members of "New York's finest." The other 200 come from the other side of the law. Most are white men, though there are around 25 women and a few African Americans. Some are actually western outlaws rather than people who made their name on the streets of New York. The album was evidently offered in exchange for cards given to purchasers of Buchner Tobacco Co. products. Item 20. $900.

As long as we are discussing criminals, here is another representative, though these gangsters are fictional. Item 76 is an archive of material relating to Mario Puzo and his seminal book, The Godfather. There is not a lot you don't already know about this work, if not from the book, then surely from the movies. The archive belonged to William Targ, Editor-in-Chief of Putnam's, from 1968-1978. Targ acquired the rights to publish Puzo's book for $5,000 after it was rejected by two other publishers. Among the items are a Puzo inscribed copy of the book to Targ, letters and documents from Puzo and others, some including changes requested and made (or rejected). Among the most notable is a scathing criticism of the work by Walter J. Minton, Putnam's plainspoken, perhaps abrasive, President. Minton had picked up the unedited manuscript and was unimpressed. He wrote a memo to Targ describing the book as repetitious, underdeveloped, and "recounted by the author in long, dull blocks of not very distinguished prose." In what may have provided important direction, Minton says Michael Corleone "could have been the heart of the book - the boy born into this family of hoods, does the ivy league bit - then finds he can't escape the web that his family and heritage have woven for him." But then he adds, "But Mario just has not got the skill to handle this rather dramatic potential." Ultimately, Michael did become the focus of the series of movies. Minton got it wrong on the paperback rights. He writes, "Whether we can stick somebody for the paper rights I do not know. But it sure as hell will have to be on the basis of the promise of the movie." The Godfather went on to be enormously successful both in print and on film, and Putnam was able to stick somebody for the paperback rights for $410,000.

Riverrun Books & Manuscripts may be reached at 914-478-1339 or mail@riverrunbooks.com. Their website is located at www.riverrunbookshop.com.