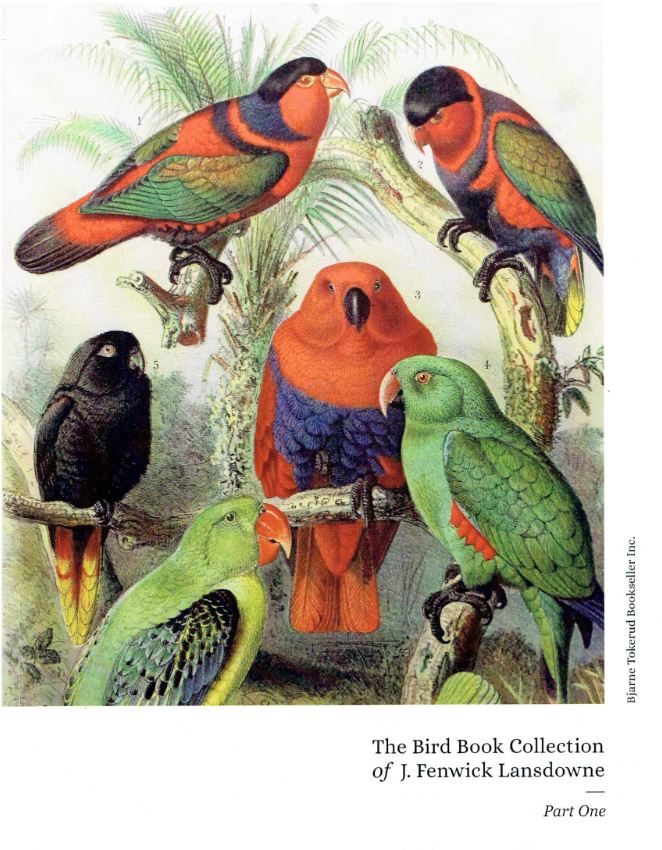 Bjarne Tokerud Bookseller has published a catalogue of The Bird Book Collection of J. Fenwick Lansdowne. Though born in Hong Kong, Lansdowne spent his entire life past the age of three living in Victoria, British Columbia. Lansdowne was an extraordinary artist of birds. His artwork was displayed at such institutions as the American Museum of Natural History and the Smithsonian. Along with his paintings, Lansdowne illustrated numerous ornithological books. His work is most often compared to that of Audubon, which is about as high an endorsement as you can get in this field. Fenwick Lansdowne died in 2008.

This catalogue contains the personal collection of bird books from his library. They served as both reference works and for pleasure. While Lansdowne was a Canadian, Tokerud is a Canadian bookseller, and his catalogues are usually concentrated in Canadian books, Lansdowne's collection was international in scope. He wanted representatives from all over the world, so this selection is not focused on Canada nor any other one country. Here are a few items that he owned.

There is really nowhere else to begin a description of Lansdowne's books than with the one that undoubtedly was his greatest inspiration. That would be John James Audubon's The Birds of America. He did not possess the double elephant folio first edition. Few can quite afford a book which in top condition can sell for over $10 million. He did have a set of the first octavo edition, published in seven volumes from 1840-1844. This is no ordinary book even if not on a level of the folio. The first edition was so costly to produce that Audubon was not able to sell enough copies to make much of a profit on it. He then realized he could still make this long process of creating the book work financially if he could produce an affordable edition. The result was the creation of this first octavo edition. It does have one advantage over its more expensive earlier version. It adds 65 new images that were not contained in the folio. Item 2. Priced at CA $75,000 (Canadian dollars, or approximately $57,778 in U.S. dollars).

This next item is an uncommon work by Aududon that chronologically fits in between the publication of the first edition and the first octavo edition of The Birds of America. Audubon printed his first edition as a plate book with a separate text volume known as the Ornithological Biography. He did this because Britain required ten copies of a book to grant it a copyright and ten copies of Birds would have cost him a fortune. So he published, and copyrighted, only the text. However, Audubon felt that the text was somewhat haphazard in its presentation, so he determined to create something of an index to his and other bird books that would bring it all into some semblance of order. It was published in 1839, between the two editions of Birds. The title is A Synopsis of the Birds of North America, and despite being early Audubon, it is not expensive. It lacks illustrations, and Audubon is far more appreciated for his drawings than his text. Item 1. CA $450 (US $346).

Some have referred to Prideaux John Selby as the British Audubon, though it should be the other way around. Selby published his drawings of British birds prior to Audubon. His drawings were considered the best of the pre-Audubon artists, being more life-like and scientifically accurate than most. He also had them printed life size, in a double elephant folio like Audubon. This is not a book you read in bed. Actually, and again like Audubon, you do not read this volume at all. Selby, too, published separate text volumes so he would not have to place many copies of his expensive plate volume with British copyright authorities. Offered is volume 1 of 4, Plates to Selby's Illustrations of British Ornithology. This is the first of 2 plate volumes (the others being the text). Not all copies are identical as the plates were originally issued separately. For volume 1, the years were 1818-1823. Item 31. CA $15,000 (US $11,552).

Next we have one of the earlier, particularly in terms of being reasonably scientific, books on birds. Item 44 is the Ornithologiae Libri Tres of Francis Willughby. This is the Latin edition, published in 1676, two years ahead of the English edition. Prior to Willughby, the scientific value of bird books was very limited. They tended to be based on factors such as edibility, perceived human-like attributes, singing ability, and often included mythical birds such as the phoenix. Willughby divided the categories to land and water birds, and then classified them by anatomical features, notably beak and foot shapes. Willughby's book was completed and published by his friend John Ray, Willughby having died four years earlier. CA $6,000 (US $4,636).

This next book doesn't describe mythical birds, though they might as well be. Rather, it deals with extinct birds. Item 35 is The Dodo and Its Kindred; or, The History, Affinities, and Osteology of the Dodo, Solitaire and Other Extinct Birds of the Islands Mauritius, Rodriguez, and Bourbon, by Hugh Edwin Strickland and Alexander Gordon Melville, published in 1848. Strickland was a geologist, Gordon a comparative anatomist. What particularly interested them about the extinct birds of these islands, the dodo in particular, was their recent extinction, and the fact that humans had been the cause. CA $3,500 (US $2,705).