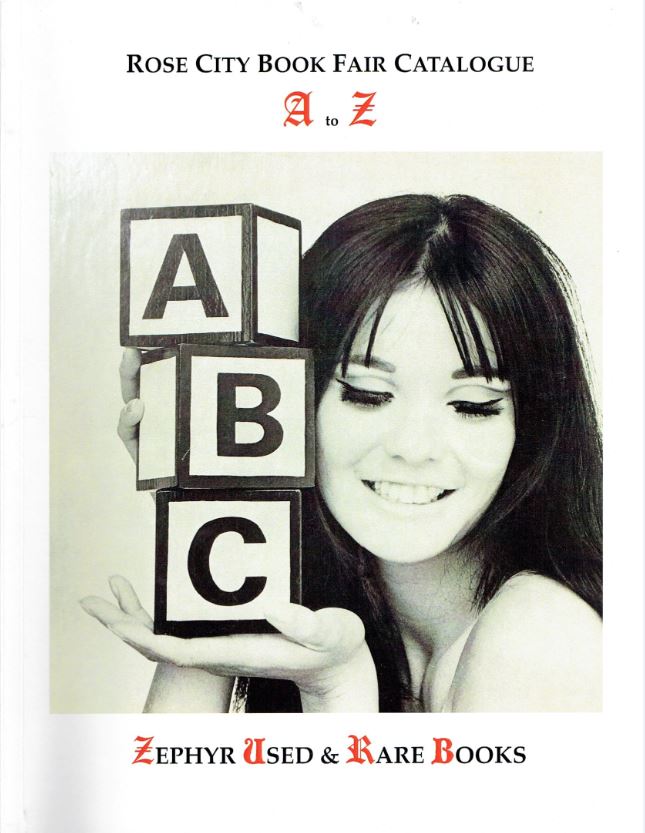 Zephyr Used & Rare Books recently published a Rose City Book Fair Catalogue A to Z. That was for the book fair in the Rose City, also known as Portland, Oregon. This is not the typical fair catalogue, a truncated version of the usual dealer catalogue. This one is large, thick, and filled with unusual items, and perhaps a few that aren't. This is uncommon stuff. You will find lots of mid-20th century pulp and other less-than great literature here, but not much Shakespeare. There is also a large quantity of ephemeral items, things you are unlikely to see again if you miss this opportunity. This is a fun catalogue to read, and there is much to be had that will not break the bank. Here are a few samples.

This is not your typical ABC or alphabet book you see on the cover of this catalogue. Rather than targeted to children, my guess is it appealed primarily to adult males. The title is ABC, featuring photographs by Frank Bez, published in 1967. Bez photographed many beautiful women (and some male and not beautiful people too) during the 1960s. This book contains photographs of beautiful women of the era, some wearing very limited amounts of clothing. Many are names still famous today, such as Raquel Welch, Elke Sommer, Jane Fonda, Ann Margret, and Carol Lynley. Each is associated with a word beginning with a different letter of the alphabet. Even Marlene Dietrich, a star from an earlier era, makes an appearance, under "V" for Vintage. The photographs are loose, preserved in the original box. The letters and one-word associations are on the versos, making this a textual as well as photographic book. Item 53846. Priced at $750.

Next we have a picture from an ostrich farm, but it is not the ostriches in the foreground that make this fascinating. It was taken in 1901 by William M. Graham at Edwin Cawston's South Pasadena Ostrich Farm. Cawston raised ostriches for their feathers, popular in women's clothing accessories in that time. However, like Knott and his berry farm a few decades later, Cawston turned his farm into something more. He made it a tourist attraction, where you could take ostrich rides, either on their backs or in ostrich-drawn carriages, and buy various items made with ostrich feathers. Nevertheless, what makes this picture fascinating, rather than the ostriches, is what looks like a huge satellite dish in the background. That is not what it is. Rather, it is a pioneering development in solar technology. The dish was 33 feet in diameter, rose to six stories tall, weighed 8,300 pounds, and was lined with 1,788 mirrors. It was the invention of one Aubrey Eneas, clearly way ahead of his time. The dish focused the suns rays on a water filled boiler. That created steam which in turn operated water pumps, sufficient to provide the farm with all the free water it needed. Unfortunately, Eneas' $2,500 device proved vulnerable to winds and hail and his company went bankrupt in 1910. Cawston's solar heater was dismantled during World War I so its steel could be used for the war effort. Item 54160. $250.

It is time now for the ultimate road trip. Americans Kate and Arthur Harris, Mrs. Wadsworth, and chauffeur Joseph Pickett embarked on a long tour of Europe in 1911, when roads and cars weren't quite what they are today. The Harrises must have been reasonably well-off as they took not only their luggage and chauffeur by ocean liner from New York, but their 1910 Pierce Arrow as well. They started by touring England, but then proceeded to drive all around the continent. What we have here is an album containing 416 photographs and lots of entertaining comments by Mrs. Harris. Their car was equipped with extra luggage racks and a special bracket on the side to hold three spare tires, which were needed. The album documents the trials of changing tires and maneuvering through bad roads and steep mountain climbs and descents. It also displays much in the way of local scenery and people they saw along the way. Over 100 of the photos offer panoramic views. The four spent almost three months traveling before returning to New York after a last stop back in Liverpool. This album was presented by Mrs. Harris to their chauffeur on Christmas 1911. Item 53910. $2,400.

Speaking of chauffeurs, this one lived a very different sort of life than Joseph Pickett, or at least he would have if he wasn't a fictional driver. The book is titled Private Chauffeur, by Robert Campbell Bragg, published in 1952. I won't give away the plot (I can't - I haven't read the book) but the cover depicts the chauffeur about to have his way with a beautiful lady. Above the title, it says "Restless society matron, reckless daughter, seductive nurse - all three were at his mercy!" Presumably, Mr. Pickett did not treat Mrs. Harris and Mrs. Wadsworth this way. The cover then questions, "What did he have that every woman wanted?" You will have to read it to find out. The book is credited to "N. R. De Mexico," as fictional as the chauffeur. Perhaps Mr. Bragg did not wish to be associated with his creation. Item 54170. $50.

Here are a couple more books I haven't read. They are the work of Maysie Greig, a prolific writer of light romances in the first half of the twentieth century. If you haven't heard of her, you are not alone. Her first husband was the detective story writer Delano Ames, with whom I am similarly unfamiliar. The first of Ms. Greig's novels is described as "the gay story of Paula's romantic discovery." "Gay" had a different connotation then. The second is "the engaging story of a career girl who applied a business axiom to love." This is the first time I've seen the words "axiom" and "love" in the same sentence. What I can say about these books I have never read is that their titles probably would not be all that well received by most women today. The first is A Man to Protect You (item 54053. 1939. $45). The second is The Man is Always Right (Item 54055. 1940. $75).

We conclude with a more serious book than any of the others. The title is Quack Quack, by Leonard Woolf, known not only for his own writing, but for being the husband of author Virginia Woolf. This first American edition, published in 1935, is a critical analysis of "quackery," in this case the fascist political philosophy spreading through Europe at the time. Woolf refutes Oswald Spengler's view that "Prussianism" was needed to save civilization from the "Coloured Peril." He likens the rise of authoritarian leaders to a breakdown in tribal civilization, barbaric leaders returning their tribes to savagery. Perhaps Woolf has some thoughts worth revisiting today. Item 54164. $450.