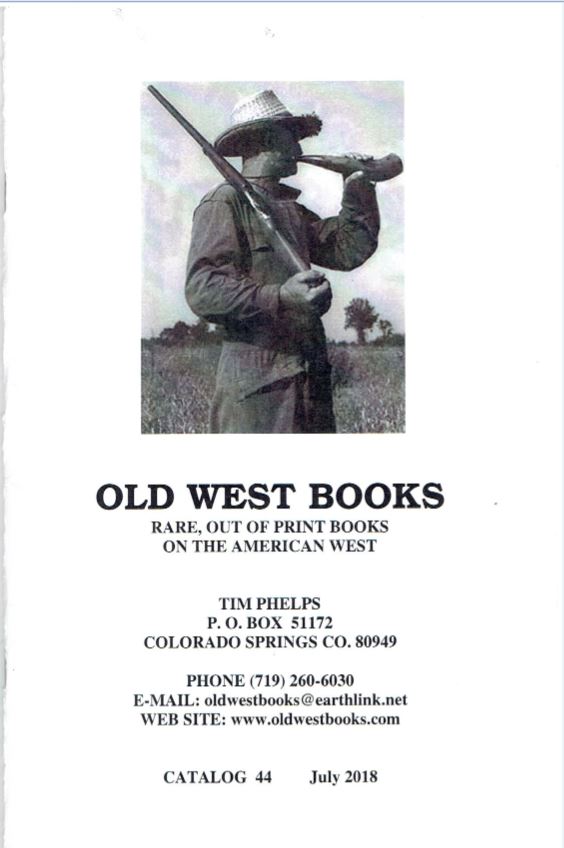 Old West Books has published their Catalog 44 - July 2018 of Rare, Out of Print Books on the American West. These are not so much the sensational type of books we often associate with the West, exaggerated tales of gunfighters and legendary outlaws whose names we still remember today. Rather, we have more in the way of factual accounts, many coming from soldiers and officers who drove the Indians from their land, and researchers who attempted to piece together the West's past as it truly was. That is not to say their views were not colored by their own preconceived notions. Many books refer to Indians as "savages," but I'm still looking to find one that refers to the people who took their land that way. However, they were true, at least from their own perceptions, rather than attempts to be sensational instead of accurate. Here are a few of them.

We start with a book that is not particularly valuable on its own but for the inscription within. The title is General Armstrong Custer by Frederick Dellenbaugh, published in 1917. No, it isn't inscribed by General Custer. He died young. Rather, it is inscribed by his wife, Elizabeth Custer, who outlived him by more than half a century. It is safe to say this book is favorable to the General or Elizabeth would not have touched the thing. She wrote several glowing books about her husband, but they were not intentional exaggerations. She believed every good thing ever said about him to her core. She was intensely loyal, if not totally objective. In her inscription, Mrs. Custer writes, "Two of General Custer's guiding mottos from boyhood were Do not cross bridges till you come to them. Do not cry for spilt milk." Actually, when Custer reached his bridge, he should not have crossed it at all. Included with the book is Mrs. Custer's calling card and a hand-written note. Item 42. Priced at $1,750. Item 43 is a second copy of this book without Mrs. Custer's inscription or memorabilia. $40.

This next book was inscribed to Mrs. Custer, rather than by her. The author is Ellen McGowan Biddle, who followed her army officer husband all over the West. James Biddle was a brevet brigadier general during the Civil War, but went back to being a colonel after it was over. Mrs. Biddle's husband did not achieve the fame of Mrs. Custer's husband. However, he did live to be 77 years of age, more than double what Custer reached, a fair enough trade-off. Col. Biddle served in the South during Reconstruction, but then was sent west. Ellen Biddle provides an account of what life was like for an army wife on the frontier, being assigned at various places from Texas to California. It was not an easy life, but she focuses much on the positive things, the friendliness of many of the people she met along the way, the beauty of the scenery. This is an example of a book that attempts to be honest, from her perspective, rather than sensational. She inscribed the book to Elizabeth Custer for Christmas 1912. Item 7. $975.

Next we have a biography of a man who saw the West from a different perspective. Item 99 is My People The Sioux, by Luther Standing Bear. He should not be confused with other Standing Bears, including the notable Ponca of the same name. In Luther's case, Standing Bear essentially became the family last name. Standing Bear lived a remarkable life, well-versed in both Sioux and white culture. He was born in 1868, so he experienced native culture before completely confined to the Reservation. However, at age 11, he was sent to the Carlisle Indian School in Pennsylvania, which believed the best thing for Indians was to thoroughly Americanize them so as to fit in better. Luther's father believed that with the elimination of the buffalo and any hope for a return to traditional life, the best choice for his son was to teach him how to succeed in the world as it had become. Standing Bear was an outstanding student. He learned how to live in both worlds. After finishing school, he worked as an intern for the pioneer in department store retailing, John Wanamaker. He then signed on with Buffalo Bill, serving as manager of Bill's Indian entertainers as well as a performer himself. He later wound up in Hollywood (he is buried there) and appeared in about a dozen films. This book has an introduction by the first of the famous film cowboys, William S. Hart. Standing Bear also spent many years back with the Sioux, and became intimately involved in the movement to secure greater rights for Native Americans, and to promote greater acceptance of native culture, rather than total assimilation as promoted the Carlisle school and the government. In his book, published in 1928, he recounts tribal life, leaders such as Sitting Bull and Crazy Horse, the Carlisle School and Buffalo Bill's Wild West, Custer and Wounded Knee. $250.

We will switch viewpoints once again. Alfred James Mockler was, for many years, a newspaper publisher in Casper, Wyoming, and became known as Wyoming's historian. He wrote specifically about his home state, but this is a more wide-ranging account of the West. Topics covered include John Colter and his escape from Indians, Custer and Little Big Horn, Red Cloud, the Fetterman Massacre, and more. However, one can see Mockler's prejudices in the title of his book, Transition of the West. Portrayal of the Indian problem in the West and the trials of the pioneers who reclaimed this country from savagery to civilization. Published in 1927, this copy is inscribed by the author. Item 80. $175.

In order for this to be a true catalogue of the Old West, there needs to be at least a little aggrandizement, and who better to provide that than Buffalo Bill, William F. Cody? Bill was probably incapable of writing a factual account of anything. He lived life big, and retold it even bigger. For a decade, he was a scout and buffalo hunter, a man of the West. For the rest of his life, he was a performer and exaggerator of the West and of himself, but it was all good fun. He was storyteller, not a historian. Leave it to Bill to write an autobiography that includes his death. Well, that part was provided by a friend. Bill offered the rest. Item 28 is Life and adventures of "Buffalo Bill", Colonel William F. Cody. This thrilling autobiography tells in Colonel Cody's own graphic language the wonderful story of his long, eventful and heroic career and is supplemented with a chapter by a loving life-long friend covering his last days, death and burial. It was published in 1917. It recounts his career in the West and goings on there, and the days of his Wild West show. $30.