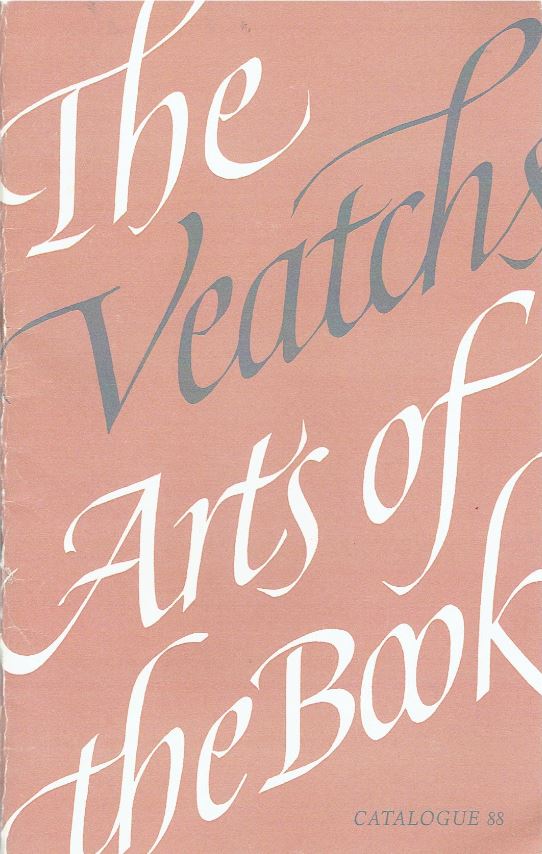 The Veatchs Arts of the Book has published their Catalogue 88. It is filled with material related to the book arts. There are fine press offerings, type specimen books, proof copies, various types of printed images, fine bindings, and other features related to the physical beauty of the book. Some are the beautiful books themselves, others the instructions and products needed to create those beautiful books. Here, now, are a few selections from this recent Veatchs catalogue.

William Morris' Kelmscott Press remains today a symbol of the Arts and Crafts Movement, and the finest of the fine, private presses. We begin with a work that was printed by the Kelmscott press, though not by the Kelmscott Press. There is a subtle difference here. It's in the capitalization. After Morris died in 1897, the Kelmscott Press wound down its business and closed the doors. C. R. (Charles Robert) Ashbee was was also a product of the Arts and Ctafts Movement, influenced both by Morris' artistic tastes and his socialism. For years, he operated the Guild and School of Handicraft. It taught poor children how to produce fine handwork. Ashbee wasn't teaching them the book arts so much as making products like furniture and metalwork. However, he also came from a family of bibliophiles and determined to set up a private press. He wanted to create books similar to those of Morris. To achieve those aims, he purchased the press that had been used by Kelmscott, hence his books were printed on Kelmscott's press, but not by the printer Kelmscott Press. Ashbee called his press Essex House Press. Item 15 is The Psalter, or Psalms of David from the Bible of Archbishop Cranmer, published in 1902. The large pictorial initials were created by Ashbee. Type is in red and black. The archaic spelling of Cranmer's time was retained. Priced at $1,100.

Robert Hoe was in the business of producing printing presses, though I doubt he built one for Kelmscott. His customers would have been larger, including those of America's newspapers. R. Hoe & Co. was the largest producer of printing presses in America, likely the world, in the 19th century. Item 26 is R. Hoe & Co's Catalogue of Printing Presses and Printers' Materials from 1881. This is a "profusely illustrated" catalogue of Hoe's large presses. The catalogue was created by Francis Hart, partner of Theodore DeVinne, whose press became the DeVinne Press after Hart died in 1883. While Hoe is noted for his very successful press business, he used much of his money to create a magnificent book collection, for which he is most known in the collecting field. When it sold in 1912, it brought in by far the most money of any book auction sale in America up to its time. Item 26. $1,200.

Here is a book that makes lemonade out of lemons, or more specifically, beauty out of bugs. Item 4 is Diptera: A Book of Flies & Other Insects. Published in 1983 by the Gehenna Press, it features the etchings of Leonard Baskin. Baskin was an extraordinary artist, illustrator, and sculptor, as well as the proprietor of the Gehenna Press. Along with five pages of text there are 36 illustrations in color and black and white. Each has been signed and numbered by Baskin. Baskin wrote that his aim was "to lift these brushed-away small insects to special and particular beauty." $12,200.

This book was intended to be of practical rather than artistic value, but it is quite attractive anyway. Item 49 is The American Bond Detector And Complete History of all United States Securities Treasury Department, by Nehemiah George Ordway. It was published in 1869. It covers all bonds issued by Congress from July 17, 1861 - March 3, 1868. They were printed in the original colors from the original dies. They come with a full description along with rules for detecting counterfeits. There is even a counterfeit bond printed from its plate that was captured by government agents. Also displayed are some railroad bonds and revenue stamps for whiskey and cigars. This is followed by images of coins, embossed to provide a more life-like appearance. They are printed in metallic inks of copper, bronze, silver and gold. The Veatchs notes that there has been some oxidation of the silver ink, "but the gold ones are amazing." This is a first and only edition. $4,700.

Next we have an extensive collection from one of the more unusual private presses. It was known by the not very artistic or clever sounding name of the Laboratory Press. No Heavenly Monkeys here. The Laboratory Press was the creation of Porter Garnett, its purpose to instruct students at the Carnegie Institute of Technology in the details of operating a fine press. It operated from 1924-1933, when Garnett retired (it reappeared in a later incarnation in the 1950s). It focused on design, typography, composition, and printing. This archive contains 92 student projects. They used the best foundry types, handmade paper, and were printed by hand. Each project names the designer, compositor, and printer, along with the typefaces and paper used. Print runs ranged from 60-160 copies and were sent to people who would be helpful to the students. Item 38. $1,500.