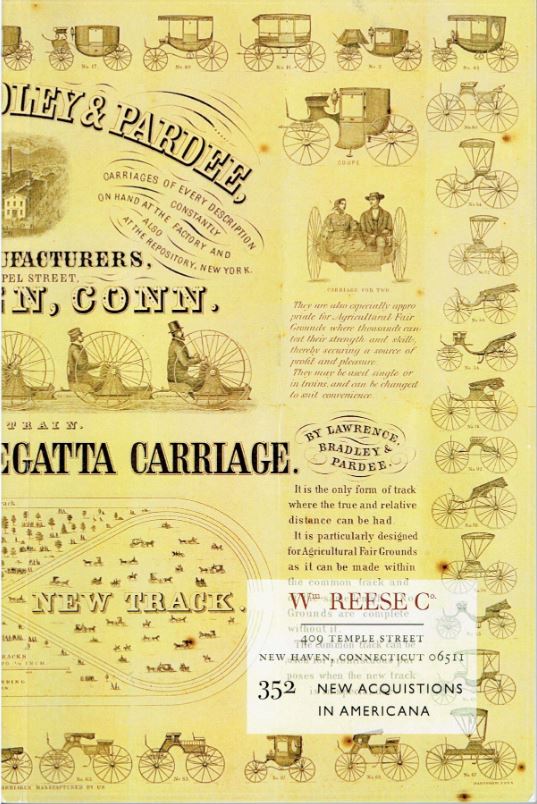 The William Reese Company has issued their 352nd catalogue, Recent Acquisitions in Americana. This is something of an American history lesson, covering a variety of issues, famous and obscure, from the 18th and 19th centuries. There are a few British items, but they relate to America, and while Frenchman Louis Daguerre's book on photography might be a bit of a stretch, Americans have been taking millions of pictures ever since. Here are a few samples.

Abraham Lincoln was an obscure, one-term congressman when he challenged Senator Stephen A. Douglas for the senate seat from Illinois in 1858. The debates from his unsuccessful campaign, and a notable speech in 1860, would lead to his election as President four years later. Item 96 is the Speech of Hon. Abraham Lincoln, Delivered in Springfield, Saturday Evening, July 17,1858. Lincoln doesn't advocate abolition, but repeats his "house divided" warning and urges slavery be put on a path toward its "ultimate extinction." Lincoln goes on to say that while blacks are not equal to whites "in all respects," that the Declaration of Independence asserts they are in some, including "the right to life, liberty and the pursuit of happiness." To that, Lincoln adds "the right to put into his mouth the bread that his own hands have earned." It's no wonder he was not popular in the South. Item 96. Priced at $8,500.

Unfortunately, the enmity Lincoln aroused in the South would catch up with him seven years later when he was assassinated. Item 1 is a pamphlet, The Assassination and Death of Abraham Lincoln, President of the United States of America, at Washington, on the 14th of April, 1865. This appears to be the first separately published account of the Lincoln assassination. It covers the events at Ford's theater on the 14th through the next morning. It was likely published within a few days of the assassination, prior to the capture of those involved. The author was Abott A. Abott. Anyone care to guess what the middle initial "A" in Abott Abott's name stands for? Item 1. $2,250.

Next we have another American President and his inaugural address. It is perhaps the most famous of all inaugural addresses, though hardly the most memorable, and his presidency at best received a grade of "incomplete." Item 78 is the rare first printing of the Inaugural Address of President Harrison, National Intelligencer...Extra. Thursday, March 4, 1841. It was the longest inaugural address ever delivered, a litany of the mistakes of the Jacksonian era and promotes the agenda of the Whig party, which won just this and one other presidential election. The length of William Henry Harrison's address was particularly notable, around two hours, delivered in a cold rain in Washington while the new President stood bareheaded. The 68-year-old new President caught a bad cold and a month later he was dead. His death was long attributed to his becoming ill from standing for two hours in the cold rain, though others now believe it was more likely sanitary conditions near the White House that cost him his life. Whatever the cause, his address was for naught as his successor, John Tyler, was not a real Whig and promptly abandoned the party agenda. $7,500.

How about one more President? This concerns the Jacksonian era at its beginning rather than its end, but it was written by a man no more enthralled with Andrew Jackson's virtues than was William Henry Harrison. The writer of this 1828 campaign piece was Dr. James L. Armstrong, and its title tells you all you need to know about Armstrong's opinion of Jackson: Reminiscences; or an Abstract from the Catalogue of General Jackson's 'Juvenile Indiscretions,' Between the Ages of 23 and 60. The sarcasm was sharp, but it wasn't enough to slay Jackson, who won the election anyway. Armstrong fills his pamphlet with examples of Jackson's "intemperate life and character," including duels and other altercations. He states that Jackson had "nearly one hundred fights or violent and abusive quarrels." Item 6. $950.

Here is the book describing the development of photography. Louis-Jacques Daguerre was not the only person playing around with the idea of photographic reproduction of images at the time, but he was the first to develop a practical process that achieved widespread acceptance. Item 42 is Historique et Description des Procédés du Daguerréotype at du Diorama, par Daguerre. Published in 1839, this is the rare first edition, first issue, second imprint (the first imprint is known in only three copies and essentially unobtainable). It was timed to come out with the first commercial production of Daguerre's cameras. It describes the process of developing the photographs, including images to help users master the process. Daguerre's cameras were an enormous success. The first imprint sold out within a few hours, and by the end of 1840, 40 versions of this manual had been published in eight languages. Daguerre's photographic process would remain the most popular until replaced by new "technology" in the 1850s. $32,500.

Next is an account of a trial for a crime unique to women - voting. At least, that was the case in 1872. Susan B. Anthony voted in Rochester during that presidential election, selecting the winning candidate, Ulysses S. Grant. Anthony was not a winner in her trial. Also tried were the election workers who accepted Anthony's vote and those of 15 other women who also voted. Item 5 is An Account of the Trial of Susan B. Anthony on the Charge of Illegal Voting at the Presidential Election in Nov., 1872, and...the Inspectors of Election by Whom Her Vote Was Received. The trial was in 1873, this account published in 1874. Anthony argued that the 14th Amendment, which provided equal rights to former slaves, also applied to women. The court was having none of such nonsense and convicted her. Anthony refused to pay the fine assessed and the state decided it was better to let that slide than make a federal case out of it. $3,500.