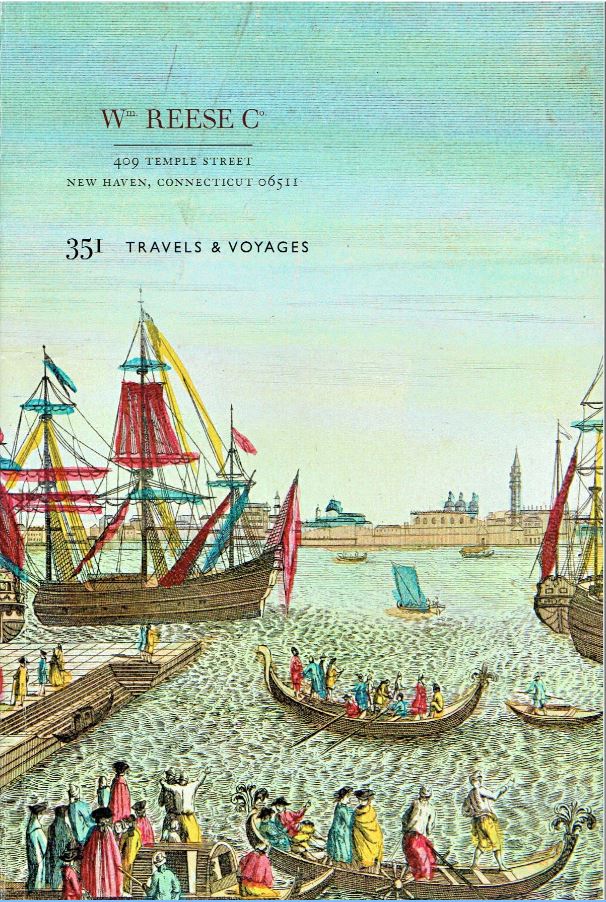 The William Reese Company has issued a catalogue of Travels & Voyages. While Reese's major specialty is Americana, they note that very few of these travels came to or from America. There are a few exceptions, such as drawings and music composed on the Wilkes' Expedition to Antarctica, but most reach places outside of the Americas, particularly North America. They are mostly quite old, ranging from the 14th to the 19th century. You won't find trains, cars and airplanes employed here, but lots of boats. Here are a few of the selections.

We begin with a book that has nothing to do with North America, and yet it is most important to collections pertaining to that land. Item 122 is Polyhistor, Rerum Toto Orbe Memorabilium Thesaurus Locupletissismus, by Julius Solinus. Solinus lived in Rome in the third century, so naturally, he knew nothing about North America. His book was a geography and natural history, while touching on other things in the world such as it was known in the day. It continued to be popular into the age of printing. It was first printed in 1473, but this is a second edition from 1543 of an edition first published in 1538. It was edited by Sebastian Munster, a 16th century German cartographer, and herein lies its connection to North America. Over in the upper right corner of his map of Asia Major is a small slice of land he has labeled "Terra Incognita." This is the first depiction of the northwest coast of North America on a printed map. The section of coast features a small bay, some trees and hills. The map also displays a strait between North America and Asia two centuries before being explored by Bering. By this time, Munster realized that North America was a separate continent, but his depiction of the northwestern coast must have been essentially guesswork. Priced at $15,000

This next item is not as old as Solinus himself, but it is older than any of the printed works in this catalogue, or any printed books at all. It comes from the 14th century, and it consists of two leaves from one of the earliest manuscript accounts of one of the most famous journeys ever undertaken. It comes from Marco Polo's description of his journey to Asia in the late 13th century. Polo traveled with his father and uncle from Venice through Jerusalem, Turkey, Persia, India, and on to China. He left in 1271 and did not return until 24 years later. His was the first detailed account of the East by a westerner. Wars on the Italian peninsula when he returned led to Polo being imprisoned, affording time to write his account. He was released in 1299 and went on to have a successful career as a merchant until his death in 1324. These two leaves include the entirety of chapters 113-117, with parts of the adjoining chapters. They include Polo's visit to Tibet. The survival of these leaves represents a bit of good fortune. They were used as pastedowns in a later book. Experts have dated them to circa 1350, which would be only a generation after Marco Polo died, and a century before the invention of printing. Item 104. $250,000.

This next item does involve North America. It is a watercolor depiction of a battle between two American naval ships, one representing the United States of America, the other the Confederate States of America. The battle took place off the coast of France. Huh? The CSS Alabama was built clandestinely in Liverpool in 1862. The Confederate Navy was short on ships and needed help to build them. The Alabama's mission was to attack Union shipping all over the world. She never entered a Confederate port, the Union had them blockaded, but attacked primarily Union merchant shipping repeatedly for the next two years. It was hoped this would force the Union to pull ships away from its blockade (it did not). The Alabama had pulled into port at Cherbourg, France, for some repairs when the Union was finally able to track down this thorn in its side. The USS Kearsarge stationed herself outside the port. The Alabama was trapped. Her captain decided the only recourse was to issue a challenge. The Alabama proceeded out of the port, and in open waters, while thousands watched from the French shore, the two engaged in battle. It was a mismatch. Within an hour, the Alabama was disabled and began to sink. Her crew was rescued by the Kearsarge and other boats in the area, but the Alabama was no more. The most famous painting of this battle was done by Edouard Manet. The artist for item 26 is unknown, but the work is of excellent quality. $7,500.

Here is the tale of a "distressful" voyage, "distressful" being something of an understatement: The Melancholy Narrative of the Distressful Voyage and Miraculous Deliverance of Captain David Harrison, of the Sloop, Peggy, of New-York... The Peggy was sailing from the Azores to New York with a load of wine and brandy when a series of storms tore her sails to shreds. She could barely move, so for six weeks she drifted aimlessly. The crew soon ran out of provisions, and had no success trying to hook fish. Their one solace was the wine and brandy, of which they partook regularly. Eventually, they became so hungry that they turned to the only source of food remaining – themselves. The first victim was obvious to them, a black slave. They shot him and served him up, with a touch of gourmet cooking. They stewed him in wine. A few days later, now down to just six remaining, they determined another sacrifice was necessary. They drew lots, but before shooting the unlucky selectee, decided to wait until the next day in the hope that Divine Providence would intervene. It did. They spotted a ship in the distance, signaled, and it came to their rescue before the second execution was needed. This account was written by the captain, David Harrison, and published in 1766. Item 60. $10,000.

Next is a one-of-a-kind from America's first significant exploration outside of its boundaries. It is a manuscript album from the United States Exploring Expedition, better known as the Wilkes Expedition. The purpose of the voyage was to gather much oceanographic and scientific information, while building America's reputation on the world stage. The number of specimens and data collected was staggering during its four years of travel. Major stops were in Antarctica, the Pacific Islands, and the coast of Oregon and the Pacific Northwest. Item 35 is not an account of the voyage, but rather, a manuscript titled The Nativity and Other Music. It was composed shipboard from 1841-1842. It consists of original music and watercolors created by expedition scientist James D. Dana and Acting Surgeon James C. Palmer. There are eight songs, four of which are accompanied by original artwork. The songs feature events experienced on the voyage and were likely performed on board as entertainment for the crew. $60,000.