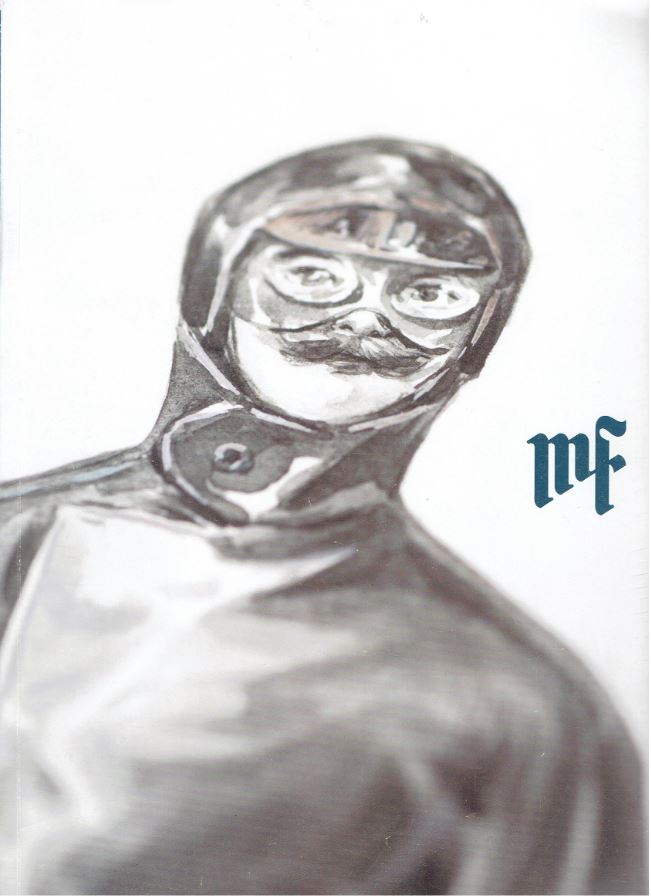 This catalogue is a first – Catalogue 01 from Mark Funke Bookseller. Funke is located in Seattle, Washington, not an expected location for the bookseller's specialty. If not an American focus, you might expect a bookseller from Seattle to be oriented toward Asia, but Funke specializes in material from Continental Europe. Within the continent, there is a particular focus on German material, including items in the German language. And, despite the business name, Funke is not limited to selling books. They offer all sorts of works on paper, with lots of other types, including manuscripts, drawings, photographs, archives, and other ephemeral material. This first catalogue is a spectacular, thorough, highly illustrated collection of items, most having several pages of illustrations. There are only 25 items presented, but you will have a complete knowledge of each once you see their listings. Here are a few of them.

We begin with a very special item, one that combines joy, sorrow, tragedy, and countless other human emotions in one touching, specially prepared book. From 1903, it is a look at the playhouse of Princess Elizabeth von Hessen. It was a wonderful playhouse created by the Princess' loving father. The sadness comes from it being a memorial to the Princess who died at the age of 8. The doting father was Grand Duke Ernst Ludwig of Hesse-Darmstadt, a state in Germany. From the moment she was born, the Grand Duke adored his only daughter, and having this large playhouse built for her was an expression of his feelings. He forbade adults from entering, so they would have to wait until she came out herself. Elizabeth was evidently a generous and affectionate child. According to Wikipedia, she was also adored by her great-grandmother, English Queen Victoria, whom she regularly visited. The Grand Duke was also the brother of the Tsarina of Russia, and it was on a visit to see her uncle and aunt, the Tsar and Tsarina, that the young Princess died. Though some speculated she drank poison intended for her uncle, the physician believed it was typhoid. This book was created by Elizabeth's Governess, who has inscribed it to Elizabeth's cousin, Princess Anastasia Romanov. Princess Anastasia also died too young, but under very different circumstances. Item MF 007. Priced at $4,500.

Here's an extreme rarity for the science fiction aficionado. In 1934, an organization of fans of this still budding form of fiction was created by Hugo Bernsback, the Science Fiction League. The first chapter was formed in Brooklyn, and in October of 1935, George Gordon Clarke began publishing The Brooklyn Reporter. It was not exactly a professional-looking publication, a mimeographed production. The editor was Frederick Pohl, later a noted writer, but all of 15 years old at the time. Pohl was selected because he was the only member with a typewriter. The Brooklyn Reporter lasted for only five issues, and they are almost impossible to find any more. In 2009, Pohl wrote that he had no copies and hadn't seen any in years. Funke has three of them, numbers 3-5. The Reporter was also in the middle of a feud between Gernsback and the Brooklyn division of the League. Several other contributors to what is considered the pioneer science fiction fanzine became known as writers in the field, including then 19-year-old Forrest J. Ackerman. The fanzine included reviews, original writing, news, biographies and other related material. Item MF 016. $2,500.

This is a Souvenir book in a slipcase from one August Schroder, dated 1844. We don't know much about Mr. Schroder, other than he had a sense of humor. Considering that sense, it's surprising he put his name on this book. It is a collection of various dirty jokes, including fake newspaper ads, dirty menus, price lists for inappropriate behavior, questionable business cards, and extensive lists of how to derogatorily describe women's body parts." Think of Mr. Schroder as a lexicographer. Funke notes it's "unusual to find such a manuscript as they are frequently destroyed by embarrassed heirs." While generally in very good condition, there are signs of wear, particularly on the slipcase, indicating it was not just put on a shelf but fully appreciated by its owner. Item MF 006. $1,250.

Next is a German "wanted" poster for Friedericke Krabbe and Willy Stoll for the kidnapping of German industrialist Hanns-Martin Schleyer. Krabbe and Stoll were part of the RAF (Red Army Faction), commonly known as the Baader-Meinhof Gang. The RAF was a far left, terrorist organization in West Germany, and the kidnapping of Schleyer in 1977 represented the peak of their terrorist activities in Germany. Schleyer was kidnapped from his car despite a police escort. Three policemen and Schleyer's driver were killed in the shootout, while Schleyer was taken alive. The RAF demanded the release of several of their members, including Andreas Baader, from prison in return for Schleyer's safety. The confrontation carried on for weeks, the government refusing to negotiate, but when Baader and a couple of other RAF members died in prison, apparently from suicide, the kidnappers executed Schleyer. Stoll was shot and killed the following year while the police were capturing him, but Krabbe has never been found. Item MF 022. $450.

As a source for culinary treats, there is nothing like the Unser Kochbuch (Our Cookbook). This was the cookbook of East Germany, and undoubtedly these dishes would have been delicious, particularly if you could actually find the ingredients in their stores. The meals depicted, featuring meat no less, were not likely the typical dinner served on that side of the wall. Offered is a set, including the regular 1955 edition and a 1957 braille edition. The meals look better in the illustrated standard edition, but tasted the same regardless of which one they were prepared from. Item MF 008. $650.