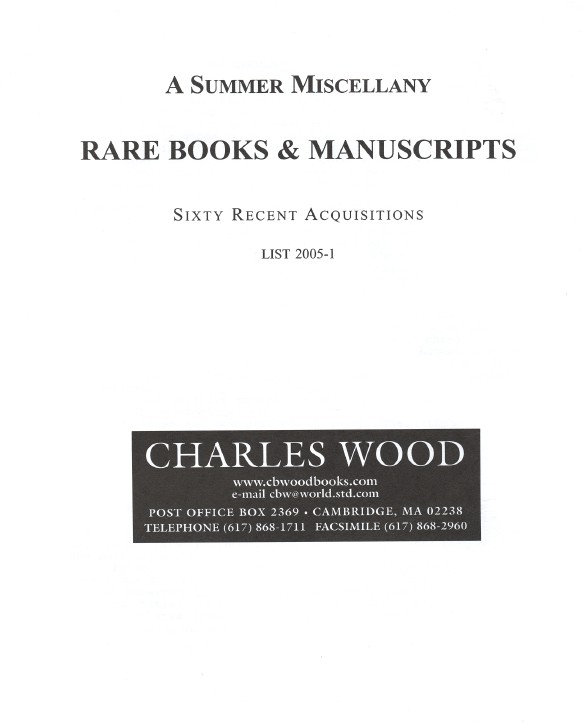 Charles Wood Rare Books has issued "A Summer Miscellany" of sixty recent acquisitions. Wood specializes in fields such as books about architecture, book arts, furniture making, pattern books, and other artistic endeavors. Those who collect in these areas will be keenly interested in these new offerings. Ask for List 2005-1. Here are just a few samples.

Item 58 is a most interesting addition for collectors of American architects, Frank Lloyd Wright in particular. Wright is almost certainly the most famous of all American architects. His best-known work is New York's Guggenheim Museum, but some 300-plus houses and numerous other Wright structures survive. Item 58 is a collection of 16 photographs taken at Wright's Wisconsin home/studio "Taliesin." Actually, it's "Taliesin III," the first two "editions" having burned down. They show Wright and his third wife, Olgivanna, family and friends. Several shots show Olgivanna holding her baby daughter, Iovanna, which dates the photos to circa 1926. Along with the immediate family, the photographs show a young Japanese couple and some musicians. Based on identifications given a similar picture, it is possible that these photographs were taken by Wright's granddaughter Elizabeth Wright Ingraham, herself an architect, but perhaps not since she would only have been three or four years old at the time. If not, they certainly must have been taken by someone close to Wright's family. $3,000.

For firearms collectors, item 11 is, On the application of Machinery to the manufacture of Rotating Chambered-breech Fire-arms, and their peculiarities. This pamphlet is excerpted from the minutes of the Institution of Civil Engineers in London. It was a lecture given them by American Samuel Colt. Colt had struggled to sell his pistol until the outbreak of the Mexican War brought him a large government order. That led to the building of his plant in Hartford, Connecticut, which still stands today. He expanded to London in the 1850s, where he struck up a friendship with Charles Manby, Secretary of the Institution, and editor of this pamphlet. $1,100.