24 Travel and Other Items from Hordern House 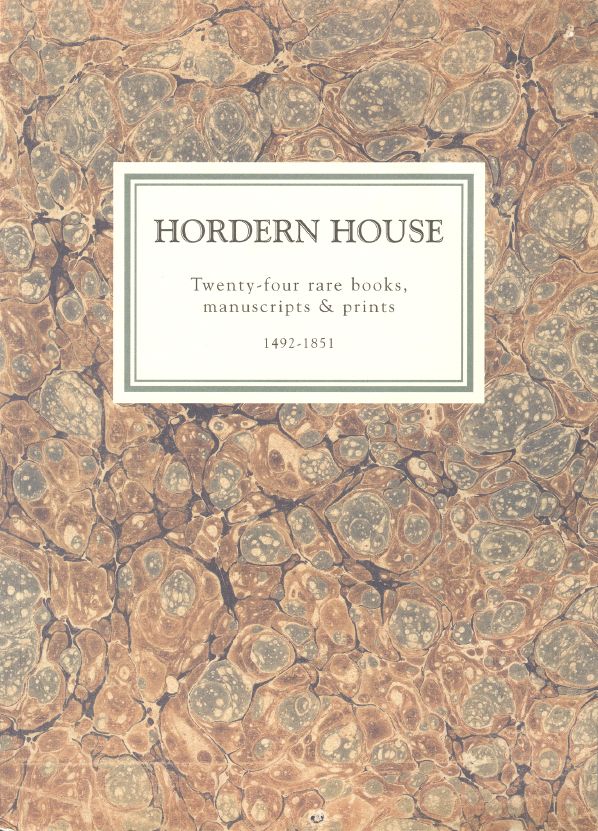 24 Travel and Other Items from Hordern House

Hordern House has issued a brief, yet extensive catalogue of rare books, manuscripts and prints. It is brief in that only 24 items are offered, but each comes with a detailed description and photograph (two quarto pages for each). Naturally, these are all extraordinary items. Hordern House is an Australian bookseller, so there is a concentration of Australian and Pacific material, and most relate to various travels and voyages. However, there are always exceptions. The items range from a 1492 Florence printing of the travels of Sir John Mandeville to 1851 hand-colored lithographs of sketches of the South Sea Islands by Conway Shipley. Here are a few of the items in between.

Certainly one of the most preeminent of all voyagers was Captain James Cook. Cook undertook three voyages to the Pacific region in the 1770s. Scientific experiments along with an attempt to locate what was then believed to be a massive southern continent were foremost on his mind. Cook would go on to do much of the mapping of Australia, and his last expedition would take him to the west coast of America and the Hawaiian Islands (where he was killed by the locals). However, in his earlier days, Cook helped chart the St. Lawrence River in North America. Item 10 is a certificate of discharge from the surveying ship Pembroke for one Thomas Warren, discharged for the very logical reason that he had died. It is signed by both Cook and his mentor aboard ship, Captain John Simcoe. Priced at AU $65,000 (Australian dollars, or US equivalent $50,007).

One of the scientific instruments Cook brought along for testing on his second voyage was John Harrison's clock. A highly accurate clock was needed for determining location. Voyagers were readily able to determine their latitude by measuring the sun's angle at high noon. However, longitude was a problem. To determine longitude, they needed to know the time lapse between high noon at Greenwich and high noon at their current location. This necessitated a highly accurate timepiece to tell Greenwich time. Harrison's development of such a clock was the missing link needed to accurately inform travelers of their location. Item 11 is The Principles of Mr. Harrison's Time-Keeper... This is the first edition in French and English, from 1767, the same year as the first English edition. AU $44,000 (US $33,744).

Also present on Cook's second voyage, along with Harrison's timepiece, was George Vancouver, a boy of just 15. He next served on Cook's final voyage, and about ten years later, was placed in charge of an expedition to the west coast of North America. His legacy includes leaving his name on well-known cities and islands in Canada and Washington State. Despite his many discoveries, Vancouver faced a disciplinary action when he returned and ended his life in obscurity.