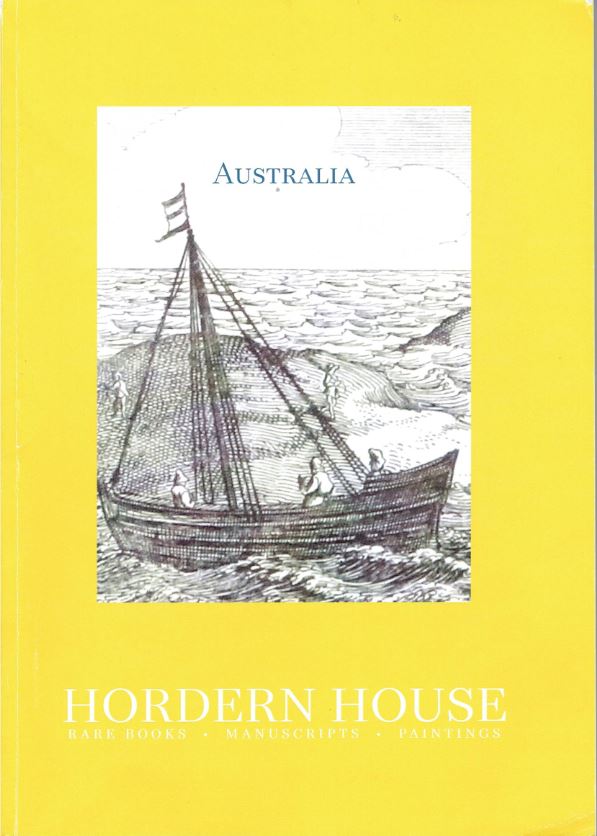 Australian Bookseller Hordern House has released a catalogue of their homeland, titled simply Australia. That sort of says it all, but for more specificity, it is divided into eight sections as follows: Voyages, Transportation, Settlement & Commerce, Indigenous History, Views, Maps, Exploration, Plants of the New World. As a note to outsiders, "transportation" in Australia does not mean highways and railroads like it does in other countries. No, it has a very different meaning. These are a few of the Australian items you will find in this impressive collection.

Speaking of transportation, here is a book that helped to spur the process of England shipping its prisoners off to a penal colony on the newly discovered land of eastern Australia. It was actually thought of as a humanitarian solution to a problem, as odd as that sounds for a dangerous ocean journey followed by permanent exile in a newly discovered, undeveloped land. Item 19 is The State of Prisons in England and Wales, by John Howard, a second and "best" edition from 1780. Originally published in 1777, this edition was considerably enlarged. Howard writes about the abominable conditions in English prisons. The second edition also discuses the hulks on the Thames which Howard visited in 1779. These were old ships, tied to docks which were used to house prisoners as there was no room for them all in jail. These conditions were particularly awful, Howard noting that from 1776-1778, 176 of the 632 prisoners on the hulk Justicia died. These horrific conditions led to the plan to ship prisoners to Australia, where conditions, hopefully, would be better, and the British would never have to deal with them again in the mother country. Item 19. Priced at AU $3,400 (Australian dollars, or approximately US $2,613).

Matthew Flinders is generally credited with giving the land we know as "Australia" its name, but he was not the first to use that word. It goes back more than a century earlier, to a work of Utopian fiction titled A New Discovery of Terra Incognita Australis, or the Southern World. This is a 1693 first English edition of a work originally published anonymously in 1676. The author was Gabriel de Foigny, a Frenchman about whom almost nothing is known. Born around 1650, he was a Franciscan monk, but his libertine instincts and "deplorable lifestyle" forced him to flee to Geneva and Protestantism. It was from there that he published this book, which was promptly banned by church authorities. It is the story of one Jacques Sadeur, a kidnapped, shipwrecked hermaphrodite who is saved by a gigantic winged creature who drops him off in this unknown southern land. Fortunately, its inhabitants are all hermaphrodites too, but ultimately, like de Foigny, he doesn't quite fit in. Such is the beginning of Australia! Item 4. AU $48,000 (US $36,921).

This next item is the first book on Australian settlement and is exceedingly rare. The title is An Authentic Journal of the Expedition under Commodore Philips to Botany Bay... published on April 2, 1789. As for its rarity, Hordern House notes that it is known only in four institutional copies and two in private hands. As for being the first, that publishing date came only ten days after the return to Plymouth of the first of the First Fleet ships. The English public was hungry for news from Australia. The First Fleet had departed two years earlier and many had relatives who were prisoners, and others were simply curious. Up to then, they knew nothing. This book compiled information from various sources, including newspaper reports from a few days earlier based on interviews with returning crewmen, a letter from Watkin Tench whose own account was published on April 24, an anonymous letter, and a letter from a convict to a female friend. Item 9. AU $575,000 (US $442,306).

Item 28 is the last of the "Foundation Books," the early titles describing the initial settlement of New South Wales. This book is An Account of the English Colony in New South Wales... by David Collins. It was published in two volumes, in 1798 and 1802. Collins arrived with the First Fleet as Secretary to Governor Phillip. It contains the most detailed account of the voyage and settlement. It came from the observations of an educated man who spent ten years in the colony. The second volume covers some later voyages and explorations, including inland ones. That includes the discovery of the Koala. The first volume is in the rare thick paper issue and has the engraved vignettes that appear in the text also bound in on fold-out sheets. It does not appear that the second volume was ever printed on thick paper. AU $38,750 (US $29,805).

Item 59 is an account of a somewhat later inland journey. There is a reason that practically all of Australia's settlement is along the coast, particularly the eastern coast. Much of inland Australia is a desert, not suitable for much use. Charles Sturt was determined to investigate the interior, conducting three expeditions. This is an account of his final one, Narrative of an Expedition into Central Australia, published in 1849. Sturt was convinced there was an inland sea in the center of the continent and was determined to see it. The journey was extremely difficult. At one point, for nearly six months, he was unable to travel. The heat and drought brought them to a halt. Finally, the rain came. They made it as far as the Simpson Desert before Sturt, suffering from scurvy, was forced to turn back. AU $17,200 (US $13,223).