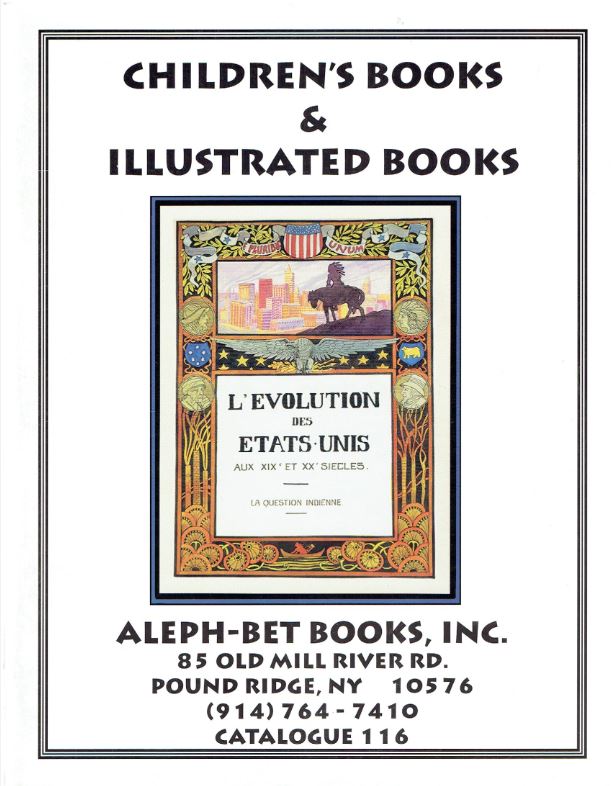 Aleph-Bet Books has released their Catalogue 116 of Children's Books & Illustrated Books. Those two types are rarely an either or – virtually everything here is both for children and illustrated. These catalogues are always filled with wonder, an opportunity for children to let their imaginations run wild. Of course, they are also mostly filled with messages and instructions from adults, and those run the gamut of values held by our elders. Many are positive, some filled with ugly prejudices adults can hold. No wonder we have ended up so divided. Here are a few of these books from which we taught our young in earlier times.

We begin with a tale of small events having large consequences: Because a Little Bug Went Ka-Choo! It is a story of a little bug who sneezes, resulting in an outsized cause and effect. It ends up toppling a turtle, sinking a ship, and disrupting a parade. The author was Rosetta Stone. Who? That name sounds a bit suspicious. It is. It is rather obscure, but the author of this 1975 book was actually the inimitable Dr. Seuss. He wrote many books pseudonymously as "Theo LeSieg" ("LeSieg" being his actual last name of Geisel spelled backwards), but he only wrote this one book as Rosetta Stone. As with his LeSieg books, the master of children's illustrations did not illustrate this book, he only wrote it. Michael Frith, who soon after this book began doing much creative work for Jim Henson and his Muppets, was the illustrator. This copy is a first printing of the first edition in near fine condition. Item 268. Priced at $1,750.

This is the final book in one of the most beloved of children's series, the adventures of Curious George. George is, off course, the mischievous monkey who lived with the Man with the Yellow Hat. This one is titled Curious George Goes to the Hospital, and its background is different from George's other tales. Sending George to the hospital sounds like a bad idea, not a good place to get into mischief, but this book was a cooperative project with the Children's Hospital Medical Center, Boston. The idea behind the book was to ease the way for nervous children who had to undergo hospitalization. In the story, George swallows a puzzle piece thinking it is candy. He becomes ill, goes to the hospital, and after an x-ray reveals the problem, undergoes surgery. While recovering, he manages to get into a wheelchair which he crashes into a food cart. It makes even the saddest of the children in the hospital laugh. This is a fine copy of the first printing from 1966 in the dust jacket. It is inscribed by "The Reys," those being H. A. and Margaret Rey. There is also a small color drawing of George holding a flower next to the inscription to one of the doctors. It is additionally inscribed by another of the doctors, who according to the previous owner (unverified), collaborated with the Reys in writing the book. Item 248. $6,000.

Item 182 began a short but enormously popular series of children's books. It is the first of the Pooh books, When We Were Very Young. It was published in 1924. This is one of the limited edition copies of the first edition, one of 100 copies printed on hand-made paper. It is signed by both author A. A. Milne and illustrator E. H. Shepard. $9,500.

The Pooh books represented the gentlest and best of sentiments we could give our children. This next one is not so nice. The title is Pickaninny ABC, a 1905 Dean Rag Book. It is printed on cloth with illustrations by Vernon Edward Barrett. As an alphabet book, it includes illustrations for each letter, with a brief "stands for" comment. The illustrations are exaggerated, ugly stereotypical drawings of black people. Some of the sayings are unpleasant too, with "A" standing for Alabama Coon, and "W" for watermelon. Item 2. $1,200.

This one is even worse. Rather than just ridiculing a race, it was intended to generate hatred within its young audience. Item 196 is Der Giftpilz (the Poisoned Mushroom), by Ernest Hiemer, published in 1938. Hiemer wrote virulently anti-Semitic children's books on behalf of the notorious Nazi propaganda newspaper, Sturmer. This book displays hideous stereotyped Jews acting evilly towards clean-cut German youth. The Jews mistreat children and servants, torture animals, and bake matzoh with the blood of kidnapped Christian children. This copy has three three Dutch anti-Semitic stickers attached, reading "Make the Netherlands free from Jews," "Combat the Jewish influence," and "Whoever buys from Jews hates his own people." $6,000.

Item 91 is the first paper doll book printed in America. It was published in 1812 by J. Belcher of Boston, based on an 1810 British book. It tells seven stories of the travails of poor Henry, with cut-out clothes to be applied to Henry for each story. It begins with Henry being stolen by Gypsies, which is a story line we would not use today. He becomes a beggar, servant of a mean chimney sweep, drummer, sailor, and eventually a midshipman. His outfits match his various stations in life. $8,750.