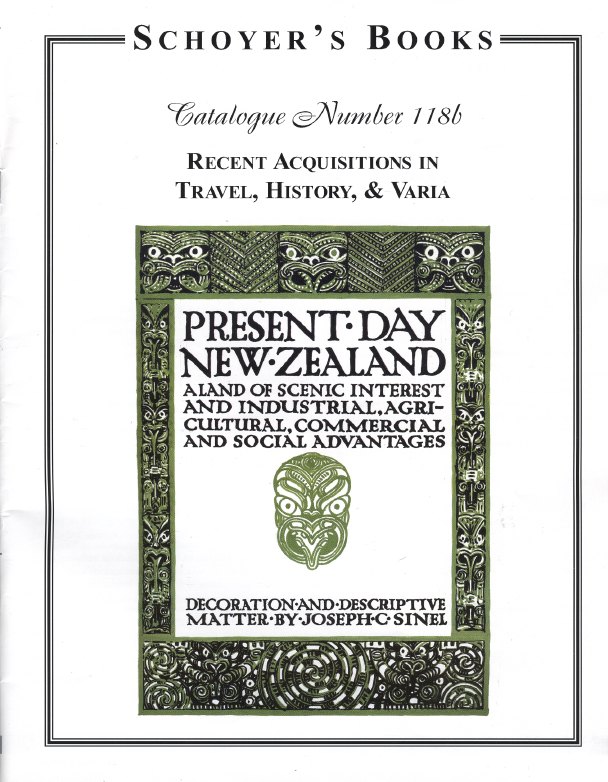 This month we look at Catalogue 118b from Schoyer's Books of Berkeley, California. The title is Recent Acquisitions in Travel, Historia, & Varia. Schoyer's Catalogue 118a was focused on Americana. This one has a distinctly European flavor, and the ages of the books, as befitting that continent, are generally older. Many French and German titles inhabit this catalogue, but we will concentrate on those in English as these we best understand.

A section of the catalogue is devoted to the collection of the late Melvin E. Jahn. Jahn was a collector of early natural histories and geological books. There are 55 items offered from his library.

Here is a book about an area of the world that was little known to Americans at the time it was published, but is very much at the forefront of our thoughts today. The title is, Caravan Journeys and Wanderings in Persia, Afghanistan, Turkistan, and Beloochistan... by Joseph Ferrier, published in 1857 (second edition). Ferrier began his journey in Baghdad. Assuming the name "Yusuf," he traveled through Persia (now Iran) pretending to be a merchant or a pilgrim. He survived an attempted poisoning by his "servant," and numerous other unpleasantries from his fellow pilgrims and those he encounters along the way. The trip was almost as risky then as it would be today! For a contemporary (1856) review of this most intriguing book, see http://cdl.library.cornell.edu/cgi-bin/moa/sgml/moa-idx?notisid=ABR0102-0050-245. Item 30. Priced at $400.

This part of the world may stir associations with an earlier case where America assumed responsibility for running a far off land. As a result of the Spanish-American War, America assumed control of the Philippines a century ago. Item 85 is a stark reminder of some of the disagreeable aspects of such responsibility. It is seven original photographs, showing "the public hanging of two natives, Ramon Santiago and Pablo de la Cruz, for murder, at Binalonan, Luzon, Oct 5th 1900." The execution was carried out by American forces. The photographs show the entire sequence, from the march to the gallows, testing of the trap door, the drop and removal of the bodies. Despite the caption, three men are shown being executed. $250.

Item 77 is a whole album of photos from this era, but a much more pleasant group. It was kept by an unknown American soldier in the winter of 1900-1901, on his trip aboard the Army Transport Buford on its way to the Philippines. The pictures start around Gibraltar, and capture the journey through the Suez, around the Middle East, and through the Indian Ocean to its destination in Manila. There are 226 photographs depicting life at the various ports along the way and fellow soldiers from the ship. Additionally there are 117 personal and family photographs from the period 1912-1914 in the album. $350.