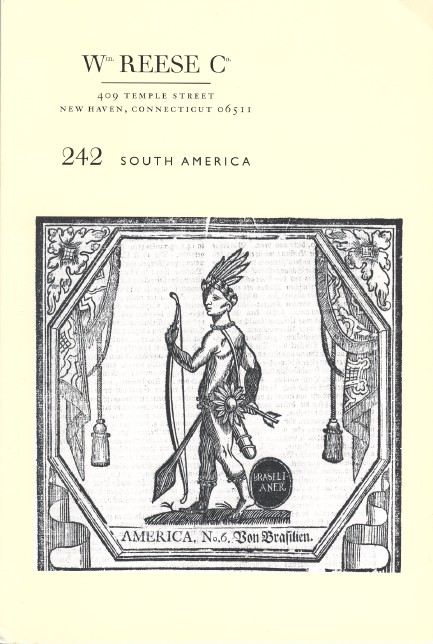 The latest catalogue from the William Reese Company, number 242, has just arrived. It is titled South America, and covers works from four centuries pertaining to that continent (with an occasional spillover to Central or North America). Works can be found in numerous languages, Spanish, English, French, German, even an occasional Italian and Latin. Topics include exploration, colonization, native Indians, slavery, revolution, religion, and lots of politics. This is a most interesting catalogue for collectors of this continent to the south of the equator.

Item 39 is an unusual discourse on slavery from around 1601. It is Tratado de la Importancia y Utildad que ay en dar por esclavos a los Indios Rebelados de Chile by Melchor Calderon. Calderon was a church official who, in this treatise, attempts to objectively consider whether the Indians of Chile should be enslaved. He gives both sides of the debate. Among the justifications for enslavement was providing spoils for the military victors who were not otherwise rewarded, punishment for transgressions of the Indians, and that, as slaves, they could be instructed in the Christian faith. Among the arguments against enslavement was the difficulty in determining which Indians had fought the Spanish and which did not, that many were obedient to crown and church, and many had suffered as a result of the conflict. Ultimately, the ayes carried the day in Spain. Priced at $22,500.

Of course, a clergyman would not want to get too close to the slaves. Rev. John Smith could attest to this. Smith maintained friendly relations with slave leaders in British Guyana, many of whom attended his church. As the slaves rallied for their emancipation, rebellion began to develop. Smith heard of this and discouraged violence, but that was not sufficient. He was charged with not informing the authorities of plans for rebellion. Item 153 is The London Missionary Society's Report of the Proceedings against the Late Rev. J. Smith, of Demerara, Minister of the Gospel, who was Tried under Martial Law, and Condemned to Death, on a Charge of Aiding and Assisting in a Rebellion of the Negro Slaves... The British government later commuted Smith's death sentence, but it made no difference. The good reverend died in prison of pneumonia. He came to be known as the "Demerara Martyr." Item 153, published in 1824. $1,750.

Item 99 is a major manuscript from 16th century La Plata. In mid-century, the province was effectively ruled by Domingo Martinez de Irala. However, Irala was not officially recognized as governor by the Spanish crown, having taken power without its official sanction. Irala understood the precariousness of his position, and despite controlling the area for most of two decades, tried very hard to obtain that sanction. This 1555 manuscript from Irala provided Spanish authorities an explanation for his actions and a request for appointment. Irala finally received the appointment he so long sought the following year, but he died only a few weeks later. $115,000.