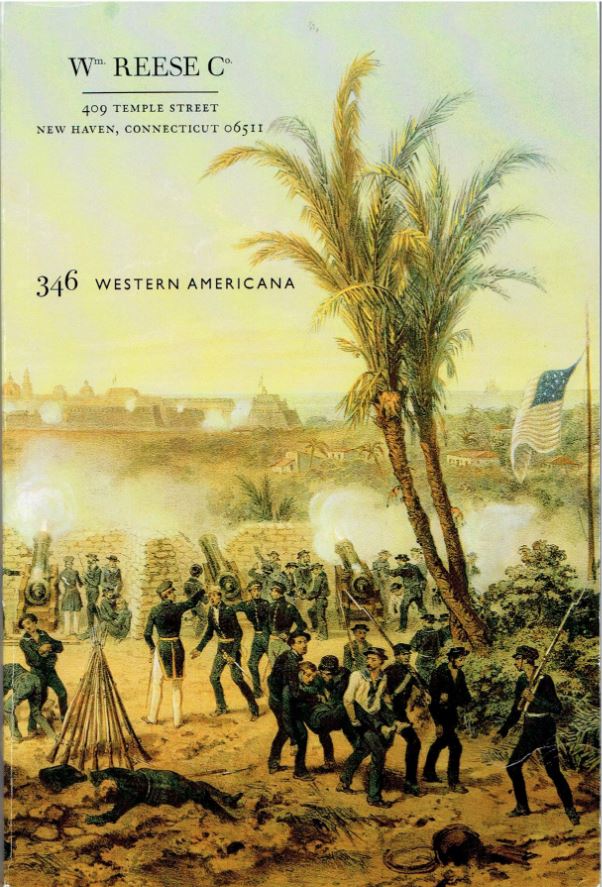 The William Reese Company has released a new catalogue of Western Americana. When one thinks of the American West it is generally focused on the "taming" and settling of the area by Easterners, a process primarily taking place during the 19th to early 20th century. Most items in this catalogue come from this time period. There are soldiers and explorers, Indians, gunslingers and lawmen, settlers, travelers heading west, gold seekers flocking to Colorado and California, Mormons escaping persecution, and others who inhabited the frontier. There are numerous accounts of early Texas, the railroads, land sales, the Mexican War, and the unfortunate General Custer. This catalogue will take you back to a time almost mythical where the American character was forged through hardship and persistence. Here are few examples of what is available.

The Mexican War left the United States with vast new territories it had seized from Mexico - California, Arizona, Nevada, Utah, parts of Colorado, Wyoming and New Mexico, and settled all dispute over ownership of Texas. Truth be told, it was why President Polk was so anxious to go to war with his southern neighbor - Manifest Destiny. He wanted more land. It still wasn't enough. Southerners believed it important for their economy that there also be a southern railroad route built to the Pacific. Unfortunately, the newly acquired territory was too mountainous for a direct route, but there was flatter land to the south. The U.S. offered Mexico $10 million for southern Arizona and southwestern New Mexico. It was known as the Gadsden Purchase, named for the U.S. Ambassador to Mexico who facilitated the deal. It is questionable whether Mexico, having just seen the U.S. seize vast amounts of its land, was all that happy, but might have felt it better to get some needed money for its land than to wait for its northern neighbor to simply take it. A major survey of the border was conducted after the war, but with the Gadsden Purchase, much of that work had to be thrown out, a new border surveyed. Item 52 is the Senate issue of William Emory's Report on the United States and Mexican Boundary Survey... published 1857-1859. It covers the survey and lots more information about the natural history and topography of this newly acquired land. Item 52. Priced at $7,500.

The taking of California proved excellent timing as soon thereafter, easterners began to flock there to seek their fortunes. The Gold Rush was on. Item 16 is a letter from an unknown new resident to his cousin Miranda Combs in Mina, New York, written in December 1852. He had reached Mokelumne Hill, an area where gold was plentiful for the taking. It also became a rowdy place, attracting many undesirables, murders frequent for a while. The writer described the place, not without accuracy – "The hotels are almost entirely brothels & gaming halls; three-fourths of the women, unsightly and moral corpses." Still he made more money than he expected. The writer goes on to describe his neighbors - "Negroes, Chinamen, Spaniards, Chilians, French, Dutch, rowdies & desperadoes from the Atlantic States and all other hit-beds of crime." Even in 1852, Californians celebrated diversity. "Shooting and stabbing is a common occurrence," he continues, with a gallows not far from his camp. Evidently, Ms. Combs must have written him speculating that the rest of California must be the same as he concurs with the theory. At its peak, Mokelumne Hill had 15,000 residents. As of the last census, that number was 646. $1,100.

As gold in California started to run down, new discoveries were made in Colorado. Item 122 is a Hand-Book to Kansas Territory and the Rocky Mountains' Gold Region... by James Redpath and Richard J. Hinton, published in 1859. It is a Kansas guide rather than one for Colorado as Colorado had not yet been split off from Kansas in 1859. Redpath and Hinton were eastern journalists. Repath lived in Kansas from 1855-58. He was an ardent abolitionist and friend of John Brown, who was also in Kansas during the Bloody Kansas days, fighting for the abolition cause. Part of the reason for this book was to encourage more northern anti-slavery settlers to come to Kansas to put the balance of power on the abolition side. This guide discusses the gold discoveries, routes, and how to outfit oneself for finding gold. It contains a few important maps of the area. $15,000.

What would the West be without outlaws? Well here is a story of how it came to have to manage with one fewer. Item 62 is The Authentic Life of Billy the Kid, the Noted Desperado of the Southwest, whose deeds of daring and blood made his name a terror in New Mexico, Arizona and Northern Mexico, a very rare book published in 1882. It is probably the most famous western outlaw book as well. The author was none other than the man who killed the gentleman Howes referred to as "America's most spectacular example of juvenile delinquency." Billy was a horse thief, cattle rustler, and petty criminal who occasionally found himself in situations where it appeared, to his point of view, necessary to kill someone. Billy was actually very loyal to those for whom he worked, and a friend to the poor and downtrodden, including Mexicans at the bottom of the social ladder. He despised the wealthy who took advantage of these people, with whom Billy could relate. Nevertheless, he was a criminal, and was convicted of murder, waiting to be hanged, when he escaped from jail, killing two more in the process. Finally, Billy met his end in a dark bedroom, unaware that the author of this book, Sheriff Pat Garrett, had entered the room. He probably didn't know what was happening when Garrett shot him. While William Bonney had achieved some notoriety, particularly in New Mexico, he likely would have soon faded from memory were it not for this book. Garrett had good reason to build Bonney's reputation into a legend. It made his reputation, as the man who brought down Billy the Kid, that much bigger too. Nonetheless, Garrett proved to be an ornery man, not popular, and Billy ended up with the greater reputation of the two. Garrett himself would be assassinated a number of years later, apparently over a land dispute. $35,000.

Item 117 is a humorous tale of a bird hunting trip through the marshes, bramble, and various challenges of South Texas, published in 1894, A Man from Corpus Christi or the Adventures of Two Bird Hunters and a Dog in the Texas Bogs. The author, A. C. Peirce, was a Boston physician. His partner and guide, the colorful Texas character John Priour, the dog Absalom ("the true hero of the story."). They traveled the Texas coast from Corpus Christi to Victoria to Galveston. It is an area teeming with bird life, lots of large seabirds, including the winter nesting ground for the rarest of American birds, the whooping crane. $850.