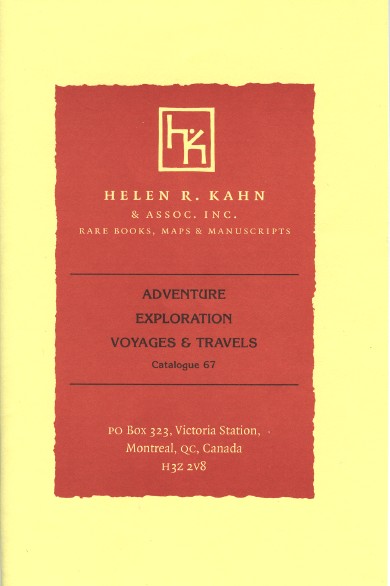 Helen R. Kahn Rare Books, Maps and Manuscripts has released its Catalogue 67 of Adventure, Exploration, and Voyages and Travels. It is an extensive catalogue of travels from all over the world. There are many books covering explorations in the far north, as befitting a Canadian (Montreal) bookseller. However, there is also a wide variety of other travels, including many from Europe to the Near and Far East. There is something here for everyone who collects within the field of travel and voyages. Here are a few samples.

Baron George Anson was a British naval officer sent with a squadron of six ships in 1740 to harass the Spanish settlements and shipping in South America. By the time he returned four years later, he had succeeded in causing some inconveniences to the Spanish, and captured an extraordinarily wealthy Spanish vessel. The booty from this capture (some might call it an act of piracy) enabled Anson to return home an enormously rich man. However, not all of his men fared so well. Two ships were forced to return to England after failing to make it around Cape Horn, and three others did not make it at all. Only Anson's ship, the Centurion, survived to complete the circumnavigation. Item 24 is the tale of one of the other ships, the Wager, which was shipwrecked off the coast of Chile. It is The Narrative of the Honourable John Byron, containing an Account of the Great Distresses suffered by himself and his Companions on the coast of Patagonia from the Year 1740, till their Arrival in England, 1746. Suffer they did. Byron, and the men with him, were captured and imprisoned by local Indians, who then turned the men over to Spanish authorities. However, they were still more fortunate than most who served on Anson's ships, as the majority of his men died, either from accidents or battle, or, for the most part, from scurvy. Along with descriptions of their "distresses," Byron tells us much about the customs of the Indians who held them. Byron would go on to be an admiral and governor of Newfoundland, while his grandson was the famous poet Lord Byron. This copy is a first edition, published in 1768. Priced at $1,800.

Not all shipwrecks end in such extreme unpleasantness. For one of the happier shipwreck stories, here is a Narrative of a Voyage to the South Seas, and the Shipwreck of the Princess of Wales Cutter, with an Account of Two Years Residence on an Uninhabited Island...by Charles Goodridge. The Princess of Wales was a sealer which was shipwrecked along the Crozet Islands. For those unfamiliar with the Crozets, it's a small group of islands in the Indian Ocean located not close to anything. Its cool, damp and windy climate make it less than an ideal vacation spot, but the sea lions and other fish and animals make food plentiful. Goodridge noted that they made full use of the sea lions, for food, clothing, and soap, and even made pipe bowls from the teeth, using them to smoke the island grass. He notes that they ate the lions' brains raw. He describes the taste as "sweet as sugar." Perhaps. I'll take his word for it. After two years, they were rescued from their island paradise. Item 58. $450.