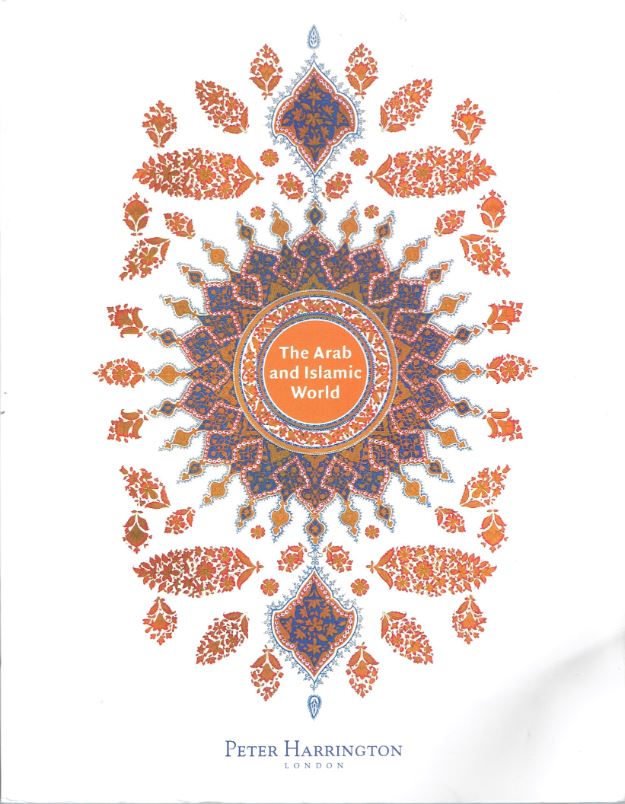 Peter Harrington has issued a new catalogue entitled The Arab and Islamic World. The material mostly covers a swath that runs from Spain (Islamic for seven centuries up to 1492) through northern Africa, the Near and Middle East, and on through parts of Asia to the Philippines. However, a few other areas do pop up, such as an early letter from Harriet Beecher Stowe with a slight Middle Eastern connection. Many books are in Arabic or other languages I don't easily recognize (not using Latin letters), but most are written in European tongues, English in particular. Dates range over many centuries. Here are just a few samples of the almost 400 items being offered.

America's war in Afghanistan is hardly the first. The British fought three wars there, officially successful but, particularly in the case of first, costly. The British were trying to hold back the Russians as they perceived a Russian take over of Afghanistan would lead to their invading India. The British probably would have had to go back and fight some more had they not given India its independence after the Second World War. Of course, the Russians, then the Soviet Union, paid a terrible price in the 1980's when they did attempt to take over Afghanistan. Today, it's America that struggles. Item 22 is probably one of the best things to emerge from the First Afghan War. James Atkinson served as Superintending Surgeon of the Indus during that war, from 1838-1841. Atkinson was also a talented artist. In 1842 he had published a collection of his drawings from that war, Sketches of Afghaunistan. These are not battle scenes but one of troops moving or at rest in the spectacular scenery of that mountainous land. Atkinson was sent back home in 1841, which proved to be a most fortuitous turn of events for him. The situation became tense in early 1842. The British thought they had negotiated safe passage out of Kabul, but all but a handful of the 16,000 people attempting the escape were killed as they tried to cross the mountains. Item 22. Priced at £6,000 (British pounds, or approximately $7,716 in U.S. currency).

This next work comes from today's Islamic world, but it relates back to a time twenty centuries before the appearance of Islam. Howard Carter was an archaeologist/Egyptologist who did a lot of digging, but with not all that much to show for it considering the cost. He was fortunate to have the backing of the Earl of Carnarvon to provide financial support, but even the Earl finally became tired of the expense. Carter talked him into one more mission and this one proved to be the jackpot. Carter made what may be the most important of all discoveries in Egypt. In 1922, he discovered the undisturbed tomb of the ancient "boy king," Tutankhamen. Tutankhamen became Pharaoh at the tender age of nine, and by 19, he was dead, likely either from disease or infection from an accident he suffered. Along with his well-preserved body, many artifacts from his reign were found with him, remarkable as other pyramids had long since been looted by grave robbers. Carnarvon died a few months later, but Carter now had the backing to spend much of the next ten years inspecting the tomb and artifacts. His account was published in three volumes from 1923-1933, The Tomb of Tutankhamen. Discovered by the late Earl of Carnarvon and Howard Carter. The first volume was mostly written by Carter's assistant, A. C. Mace, while the other two were prepared by Carter. Item 67. £3,250 (US $4,183).

So, what was the connection between Harriet Beecher Stowe and the Islamic world? On December 15, 1840, 12 years before the appearance of Uncle Tom's Cabin, she wrote a letter to Cincinnati bibliophile Louis Cist. Stowe moved with her family to Cincinnati in 1832, and the shared interest in books evidently led to their friendship. Harriet Beecher married Calvin Stowe in 1836 and they later moved to Maine. In the letter, Stowe quotes an ancient Persian fable, as it appeared in John Malcolm's Sketches of Persia in 1827. It describes a ball of clay that possesses a beautiful scent. How could a piece of clay have such a fragrance? It explains, "I am in myself but a lump of mirthless clay, but I have long lived with the rose & the sweet quality of my partner has been breathed into me." Item 335. £750 (US $966).

Here is another book with an American connection: The Camel. His Organization, Habits and Uses, Considered in Reference to his Introduction into the United States. The author was George Perkins Marsh, lawyer, diplomat, and early conservationist. He was minister in residence to the Ottoman Empire from 1849-1852, so he undoubtedly knew his camels. The book was published in 1856, and this was an era when it was thought camels might form a better means of transportation in the newly acquired desert Southwest than horses. The idea seems logical, and camels were at one point introduced to Texas. I don't know why ultimately they weren't adopted. Perhaps it just wouldn't look cool to have cowboys riding on camels. Item 227. £150 (US $193).*

Next up we have something of an attempt to retrace the most famous ancient journey. Item 270 is The Desert of the Exodus: Journeys on Foot in the Wilderness of the Forty Years' Wanderings... published in 1871. Author Edward Henry Palmer was selected to survey the Sinai on behalf of the Palestinian Exploration Fund. After his initial work, Palmer returned with Frederick Tyrwhitt-Drake and the two walked 600 miles from the Sinai to Jerusalem. Palmer became friendly with local Arab sheikhs and learned their language. They identified various sites and searched, without success, for inscriptions along the way. Their journey also took them into unexplored regions of ancient Edom and Moab. £450 (US $579).

Next we have a guide to some trips in the desert, which probably had some challenges, but nothing like walking 600 miles through it. Item 318 is Shell Motor Tours. A complete guide to the best and most interesting provincial and desert routes in Egypt, published in 1930. Trips start from Cairo and Alexandria, with some shorter ones such as a 50-mile round trip from Cairo to the pyramids, to longer ones out to Luxor and Cairo to Alexandria. The notes pages are filled with manuscript itineraries, not just in Egypt but to Jerusalem and Petra (the latter in ancient Edom, now Jordan). Harrington notes that the guide is "testament to a time when Egypt was perhaps more easily navigable than it is today." £575 (US $740).

* Editor's note:  We are grateful to Alan Aimone for this explanation of the lack of success in introducing camels to America:

"Michael Stillman’s The Arab and Islamic World from Peter Harrington (review) commented that 'I don’t know why ultimately they (camels) weren’t adopted.' Between my research and hearing a presentation about then Secretary of War, Jefferson Davis camel experiment, it was a good idea to a point.  Mule skinners hated them: they could bite, they could kick hard and of course they had their own smell to get use to!  Camels would bulk at crossing fast and large streams of water. After the Army gave up on them prospectors tried camels for mountain and desert prospecting with some success.  A few camels escaped captivity and went wild in southern California and survived."