The Book Arts from The Veatchs Arts of the Book 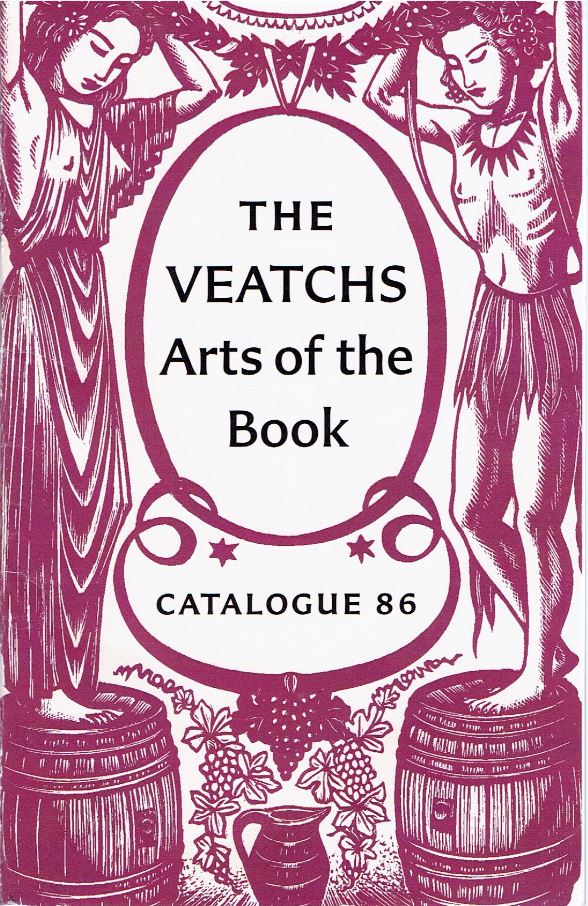 The Book Arts from The Veatchs Arts of the Book

The Veatchs Arts of the Book has issued their Catalogue 86 Spring 2017. Offered is a new selection from the book arts, including private press works, notable artwork and design, fine bindings, and specimen books. We do note one major change in this catalogue – a new cover design from the one employed for years. It is taken from John Buckland Wright's illustrations in a recent book by his son. It provides a great opening for a catalogue of the book arts. Here are a few items within.

John Buckland Wright was a notable artist and wood engraver who illustrated numerous fine press books. Born in New Zealand, he moved to England as a boy and lived there or in Europe the rest of his life. Most of his work dates from the 1930's to the early 1950's, when he died. He is most known for illustrations based on the female form, beautiful and sensuous. The illustration on this catalogue's cover is consistent with that specialization. Item 17 is Endeavors & Experiments. John Buckland Wright's Essays in Woodcut and Colour Engraving, together with other blocks remaining in his studio. It was published in 2004 by his son, Christopher Buckland Wright. This is one of 90 copies that included a separate print, this from a 1930 woodblock entitled Cafe Dansant No. 2. Priced at $850.

Next up we have one of the great works of the Grabhorn Press, though you might not know it: The Voiage and Travaile of Sir John Maundevile, Kt. Which treateth of the Way to Hierusalem and of the Marvayles of Inde, with Other Ilands and Countryes. The title does not reflect the Grabhorns being spelling challenged but rather that this is a much later edition of a book that dates back to the mid-14th century. John Mandeville, as we now know him, supposedly visited numerous lands in the East, sort of an English Marco Polo. The book was believed authentic for many centuries but is now known as a fake, Mandeville being a made-up person, and its stories culled from other texts. The Grabhorn edition was published in 1928, but bears the imprint of Random House. The story is that Grabhorn intended to publish the book under its own name, but when Random House's Bennett Cerf saw the proofs, he bought them all up to publish under the Random House imprint. It contains 34 illuminated initial letters hand colored in red, blue and gold by Valenti Angelo. Angelo had to illuminate 5,100 of these since it was published in a print run of 150 copies. This copy comes with laid in proofs of the first four leaves (eight pages) of the planned original edition, which explains the Grabhorn/Random House story. These were the planned title page and pages 2-8. The title page shows the Grabhorn, rather than Random House imprint, there is no prologue, and the typesetting is different from those in the published Random House edition. Item 30. $2,500.

If you would like more from the aforementioned talented illustrator and printmaker Valenti Angelo, here is the book: Valenti Angelo Author + Illustrator + Printer. A Checklist of His Work from 1926 to 1970. This is more than just a bibliography. It includes 65 samples of his work, some illustrations hand colored by Angelo, and a short autobiography. Laid in is a four-page prospectus printed by Angelo in 1949. Angelo was born in Italy but emigrated to America with his parents as a boy. He began creating works prior to 1926, but that year marked his first book illustrations, created for the Grabhorn Press. Item 2 is No. 19 of a print run of only 55 copies. $750.

Here is a spectacular work revealing the possibilities for superior printing. It came from France in 1884, just as the movement for higher quality printing was beginning to arise in England and America. The title is Le Livre de Demain (the Book of Tomorrow). It was published in 44 fascicles, the creation of Albert de Rochas. The Veatchs note that the book showcases "the potential of paper, ink, color, illustration, and typography." De Rochas felt that higher quality printing was limited to two or three firms, but that if bibliophiles understood what possibilities are available, local printers would feel compelled to upgrade their standards. The various fascicles provide specimens of different paper, ink and colors, including colored papers. The papers also vary in texture and weight, with samples of Chinese and Japanese papers included. Almost every page is printed in at least two colors and text blocks are contained within varying borders. The book begins with a 67-page discussion of paper, ink, and color. This copy comes with some extra printings and has a signed portrait of de Rochas inscribed to an anonymous collaborator, and is also signed by printer Raoul Marchand. It is copy no. 91 of 250. Item 20. $5,500.

Item 37 is a beautifully illustrated book, The Nature-Printed British Sea-Weeds, by William Grosart Johnstone and Alexander Croall. What makes this four-volume set remarkable are the 220 nature-printed color plates. Nature printing is a process whereby an actual specimen is sandwiched between a soft lead plate and a hard metal one. It leaves an imprint from which a print is made. It features a three dimensional appearance plus great fidelity to the original. The images were then printed in color, shades of red, brown, green, pink, purple and grey. Most are printed in one color though some are two or three. It makes for stunning images. The nature printing was performed by Henry Bradbury, England's greatest proponent of this short-lived art form. It was quite popular in the 1850's, but faded away because the process is so costly. Bradbury had improved upon a process developed by Austrian Alois Auer, which led to a dispute between the two as Bradbury did not credit Auer for the invention. This book was published in 1859, and the following year, a despondent Henry Bradbury, age 29, killed himself. $1,500.